By Eduardo Thomson and Valentina Fuentes and Matthew MalinowskiBloomberg

Chilean assets plunged after the ruling coalition suffered a surprise drubbing in the election for a constituent assembly, placing the writing of a new charter firmly in the hands of the left-wing.

The benchmark stock exchange closed down 9.3%, the biggest decline since the start of the pandemic in March of last year, while the peso fell 2.3%. Yields on Chile peso bonds due in 2030 jumped 22 basis points to 3.82%.

Candidates from the ruling coalition obtained just 37 of 155 seats on the assembly designed to write the new constitution, according to data consultancy firm Unholster. Contenders unaffiliated with any political parties secured 65 seats. The result means the ruling coalition falls short of the one-third threshold they needed to block market-unfriendly clauses in the new charter.

“The constitutional assembly elections this weekend remind us that market-unfriendly, leftist candidates can do very well in the post-pandemic era,” said Guido Chamorro, a portfolio manager at Pictet Asset Management Ltd. in London.

The results reflect growing rejection of traditional parties, adding to uncertainty as one of Latin America’s richest nations rewrites its laws following the worst social unrest in a generation. At stake are the rules that helped drive more than three decades of growth, while simultaneously fueling social discontent and inequalities.

Key points of debate during the rewrite are expected to include natural resources, pensions and social services. More immediately, the results may add momentum to a copper royalty bill set to go before senate in coming weeks that would create one of the heaviest tax burdens in global mining.

“The election results put a downward bias on growth this year,” said Sergio Lehmann, chief economist at Banco de Credito e Inversiones in Santiago. “There’s greater uncertainty regarding the economic impact in 2022 and 2023. A constitutional process with a lot of polarization can hurt investments.” 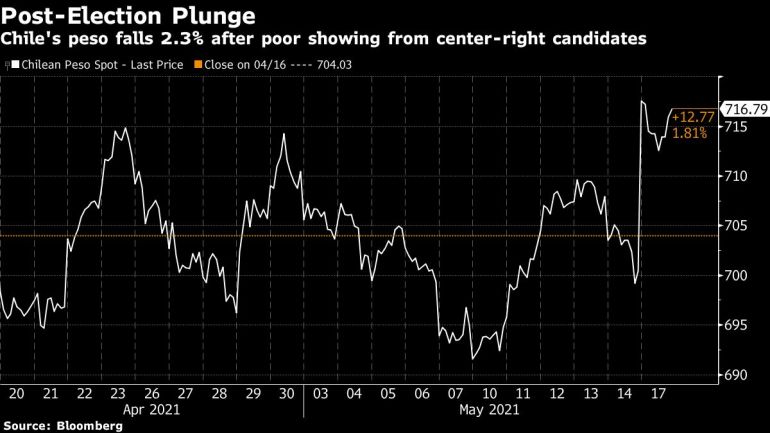 Roughly 6.4 million people participated in the elections, representing a turnout of 43%, according to data from electoral office Servel. The figure was below the government’s forecast of 7 million votes.

Leftist and little-known candidates also pulled off a string of surprises in local elections. The conservative mayor of downtown Santiago lost re-election to a Communist Party candidate, while Karina Oliva of the far-left Frente Amplio alliance advanced to a runoff vote for Santiago Metropolitan Region governor.

Assembly candidates from the left-wing group Lista Del Pueblo, or The People’s List, were big winners in the weekend vote, according to Cristobal Huneeus, Director of Data Science at Unholster in Santiago.

“Among the most important issues that they back are human rights, civil society, the environment and the idea that the current economy doesn’t work in people’s favor,” he said.

Going forward, the election results stand to boost possible presidential candidacies from leftist contenders including Deputy Gabriel Boric and Daniel Jadue, who is mayor of Santiago’s Recoleta district, Huneeus said. Chileans will vote for the next head of state in November.

Last year, citizens overwhelmingly decided to scrap the current constitution implemented during the Augusto Pinochet dictatorship. It was a key demand of protesters who took to the streets starting in October 2019 initially over a subway fare hike before broadening demands to include better public services.

The election was originally scheduled for April, but lawmakers voted to postpone it until May as daily Covid-19 infections and hospitalization reached all-time highs. The Constitutional Assembly will now have up to a year to draft the new charter.

Chile will be able to withstand significant political and economic uncertainties after the rating downgrade in October 2020, according to an e-mailed statement from Fitch Ratings, which described the country’s current rating at A- as “very solid.”

Government-backed candidates were not the only ones who took a hit. Moderate and center-left parties such as the Socialists and Christian Democrats obtained just 14% of Assembly votes.

“The clearest signals so far are that the right is weaker than expected and the center has disappeared,” said Jennifer Pribble, Associate Professor of Political Science at University of Richmond.