The United States budget deficit surged to a record of $1.9 trillion for the first seven months of this budget year, bloated by the billions of dollars being spent on coronavirus relief packages.

The shortfall so far this year is 30.3 percent higher than the $1.48 trillion deficit run up over the same period a year ago, the US Department of the Treasury said Wednesday in its monthly budget report.

The oceans of red ink in both years are largely due to the impact of the coronavirus pandemic, which led the government to approve trillions of dollars in relief to cover three rounds of individual payments, extra unemployment benefits and support for small businesses.

The deficit for the budget year that ended Sept. 30 totalled a record $3.1 trillion and many private economists believe this year’s total will surpass that amount. Some are forecasting a deficit of $3.3 trillion.

For April, the deficit totalled $225.6bn, down from a deficit in April 2020 of $738bn. That improvement reflected the fact that fewer relief payments were made this year and individuals making quarterly tax payments had to meet the normal April deadline. Last year, all tax payments were delayed at the onset of the pandemic.

For the October-April period, revenues totalled $2.14 trillion, up 16.1 percent over the same period a year ago, a gain that was boosted by individuals’ quarterly tax payments in April. The April payment was delayed last year after 22 million people lost their jobs because of pandemic shutdowns.

Outlays for the first seven months of this budget year totalled $4.07 trillion, up 25.8 percent from the same period a year ago, as the government in both periods was passing massive pandemic relief bills. 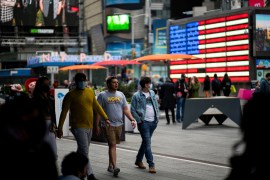 The new efforts include a partnership with Uber and Lyft who have offered to pay for rides to and from vaccinations. 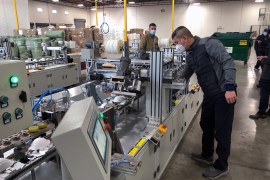 US manufacturers are stuck with hundreds of millions of unsold face masks due to low-priced imports, they say. 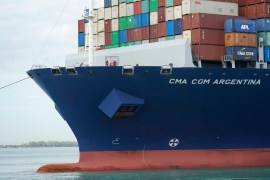 US trade deficit soared to record $74.4bn in March

US exporters are facing sluggish overseas demand in nations slower to recover as Americans are starting to spend again. 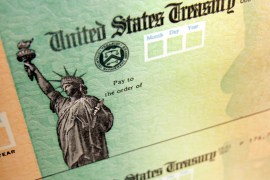 The deficit for the first six months of this fiscal year hit $1.7 trillion as stimulus cheques turbo-charged spending.