The Philippine economy shrank by more than expected in the first quarter of 2021, supporting views that the central bank will keep interest rates at a record-low at a policy meeting on Wednesday.

Gross domestic product fell 4.2 percent in the March quarter from a year earlier, the statistics agency said on Tuesday, marking the fifth straight quarter of declines amid pandemic-induced lockdowns.

Economists in a Reuters poll had expected the GDP to contract 3 percent after slumping 8.3 percent year-on-year in the previous quarter.

The Philippines is expected to manage Southeast Asia’s slowest recovery this year from the pandemic-driven recession. A return to stricter curbs in Manila and other key economic areas threatens the government’s goal – currently up for review – of at least 6.5 percent growth this year. It is also expected to drive unemployment, which has yet to show considerable improvement. 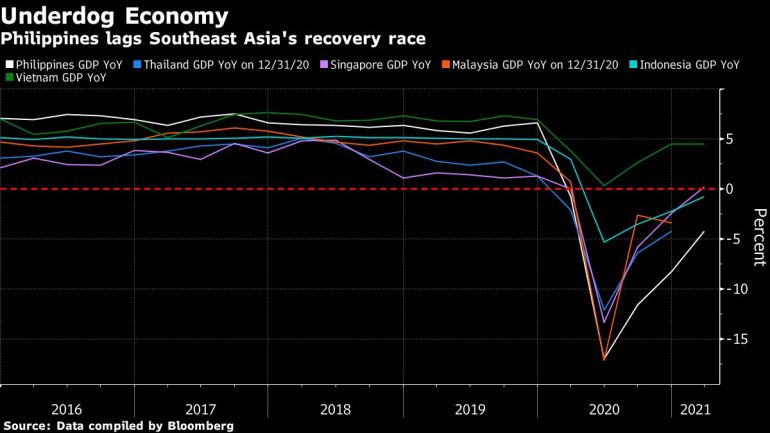 “The challenge right now is to restore business and consumer confidence,” said Dan Roces, chief economist at Security Bank Corp. in Manila. “At this pace, the Philippines may only return to pre-pandemic GDP levels in the second half of 2022 at the earliest.”

Among the major economic sectors, agriculture declined by 1.2 percent while services and industry contracted by 4.4 percent and 4.7 percent, respectively.

On the demand side, household consumption shrank 4.8 percent, but government spending grew 16.1 percent.

The economy’s performance, however, improved on a sequential basis, growing 0.3 percent from the previous quarter on seasonally adjusted terms.

“The country’s strong economic position before the pandemic and improving economic data in recent months point to an economy that is on the mend,” Economic Planning Secretary Karl Chua said at a briefing.

The Southeast Asian country is battling one of Asia’s worst coronavirus outbreaks with more than a million cases recorded and more than 18,000 deaths since last year.

The economy’s extended slump is expected to prompt the central bank to keep its benchmark interest rate unchanged at a record low of 2 percent on Wednesday for a fourth consecutive meeting, according to all 13 economists in a Reuters poll.

Some economists even expect the BSP to keep rates unchanged for the rest of 2021, despite high inflation that has breached its 2 percent – 4 percent target band mainly due to tight pork supply.