Oil tanker charter rates skyrocketed in the U.S. with refiners scrambling for ships to store fuel that has nowhere to go due to a cyberattack on the country’s main pipeline.

Companies such as Marathon Petroleum Corp, Valero Energy Corp and Phillips 66 were in the process of chartering several oil tankers for floating storage, according to shipbrokers who asked not to be identified. Ships can serve as offshore tanks during unexpected oversupply situations, such as last week’s shutdown of the Colonial Pipeline that halted fuel flows from refineries to customers along the East Coast.

“There’s no longer a market,” said shipbroker Simpson Spence Young in a May 10 report. It’s become “a smash and grab scenario with charterers focusing on securing tonnage.”

Close to a dozen tankers of different sizes were also provisionally booked or fixed to move so-called clean petroleum fuels such as gasoline and diesel from the Gulf Coast to destinations trans-Atlantic, or to other regions such as the Caribbean, Far East and also Brazil, according to the report. The flurry of interest sent rates through the roof on Monday, extending a spike in activity seen late Friday. 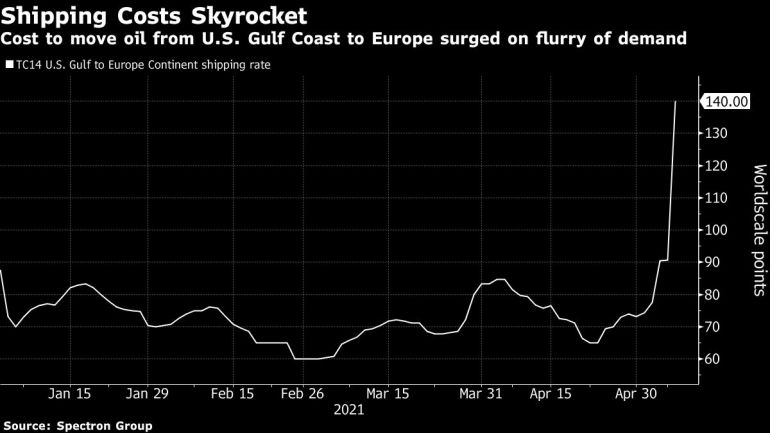 The shutdown of the Colonial Pipeline has caused supply dislocations all across the Gulf Coast, as well as North- and South-Eastern America. Rising stockpiles are prompting refineries along the Gulf Coast to snap up tankers for floating storage and exports — with some mulling run rate cuts — even as fuel flows from Europe rise opportunistically into the Atlantic Coast.

The widely-referenced TC-14 route for medium-range tankers from the U.S. Gulf Coast to European Continent climbed 54% to 140 worldscale points on Monday. The TC-18 route from Gulf Coast to Brazil also surged, according to SSY.

MR- and LR-size tankers can transport up to 40,000 tons and 90,000 tons of clean petroleum fuels, respectively.

The CEO of Colonial Pipeline said the company plans to reopen the line later this week, but warned state officials that supply shortages could occur nonetheless, according to a person familiar with the discussion. Domestic gasoline futures in the U.S. surged as much as 4.2% on Monday after the shutdown, but pared most of its gains Tuesday.