Shaun Donovan and Ray McGuire, two of the candidates seeking to become New York City’s next mayor, vastly underestimated the cost to buy a home in Brooklyn during recent interviews with the New York Times to weigh endorsements in the race.

The public gaffes raise concerns around whether the candidates are in touch with everyday New Yorkers and whether they are qualified to address the city’s affordable-housing challenges.

Kathryn Garcia, the former city sanitation chief whom the Times endorsed for mayor, guessed $800,000. Maya Wiley came in at $1.8 million.

When provided with the $900,000 median price, Wiley answered “in some neighborhoods it’s a lot higher.” A spokesman for Wiley said she knew how much an apartment costs.

The comments came just six weeks ahead of the June 22 primary, which is likely to decide the city’s next mayor in the heavily Democratic city.

It’s likely been close to 40 years since the median sales price in Brooklyn was $100,000, according to real estate appraiser Jonathan Miller, president of Miller Samuel Inc.

At the time, Brooklyn prices were about a third less than Manhattan, meaning the last time Brooklyn’s median was $100,000 was in the early 1980s, Miller said. 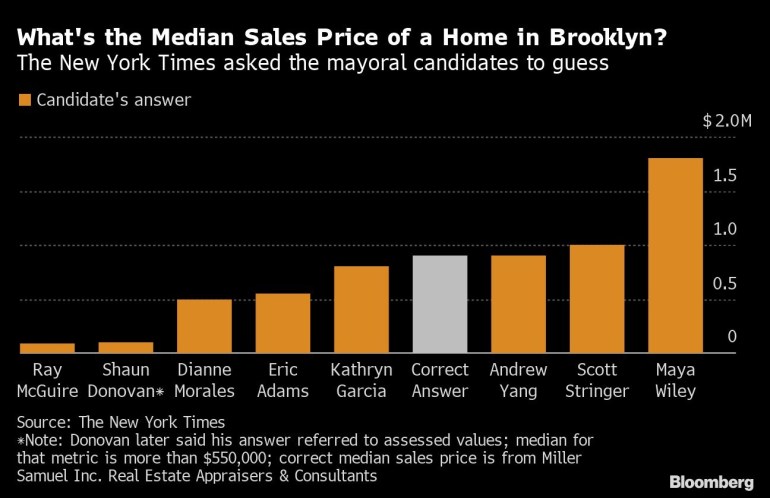 A spokesperson for Donovan said in a Twitter post that the former city housing commissioner misunderstood the question.

McGuire acknowledged his error and said it wasn’t a reflection of his commitment to addressing the city’s housing woes.

“I messed up when accounting for the cost of housing in Brooklyn. I am human. But make no mistake, I care deeply about our city’s affordable housing crisis,” McGuire said in an emailed statement. “I know what it’s like not being able to afford a home because it was my own experience.“

Spokespeople for the other campaigns didn’t immediately respond to a requests for comment.