By Akshat Rathi and Matthew MartinBloomberg

Oil companies are under pressure to cut emissions. That process starts with disclosing their entire carbon footprint so that investors and the public can hold them to account.

Earlier this year, a Bloomberg Green analysis showed that the world’s largest oil company, Saudi Aramco, understated its emissions by as much as 50%. The company’s 2019 disclosures only included wholly owned assets that were in Saudi Arabia, leaving out a number of high-emitting assets abroad. In response, the company said it would boost its reporting.

In its latest annual report released in March, Aramco revised its 2019 emissions from 57.9 million metric tons of carbon-dioxide equivalent to 71 million tons. That’s a 23% increase, which the company attributed to adding emissions from three wholly owned assets in Saudi Arabia, the U.S. and Germany.

The company reported 67 million tons of emissions last year, slightly lower than 2019 because the pandemic lowered demand for oil and gas. A closer look at the numbers, however, shows that Aramco still has a long way to go in ensuring that its emissions disclosures match those of other oil majors like Royal Dutch Shell Plc and Chevron Corp. 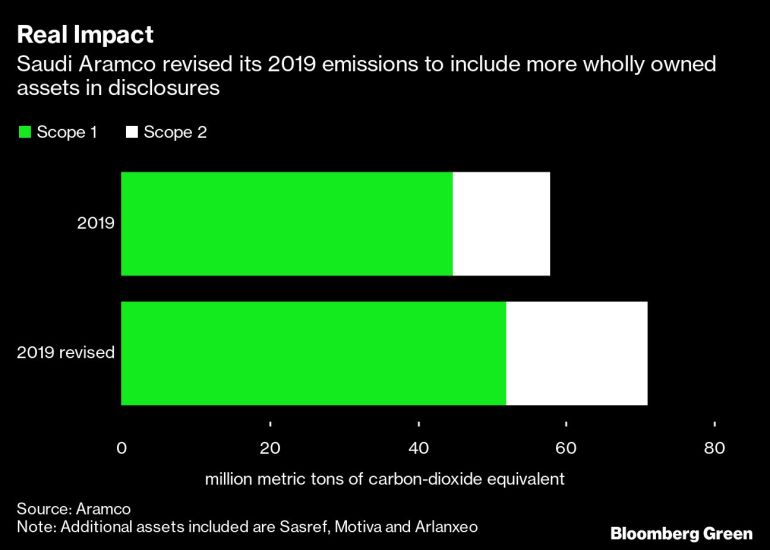 Aramco acknowledged in its 2020 annual report that emissions from two wholly owned assets weren’t included in the tally. “The Fadhili Gas Plant and Jazan Refinery were not fully operational and in various phases of startup and commissioning in 2020,” it said in a statement, adding that it will start counting those facilities in its 2021 report.

The company has also stuck to revealing emissions only from assets over which it has operational control. That means excluding most of its joint ventures both in Saudi Arabia and around the world. These include multiple refineries and chemical complexes that could add as much as 28 million tons to its direct emissions inventory based on Aramco’s ownership share, according to Bloomberg calculations.

Aramco’s disclosures so far have only revealed Scope 1 and 2 emissions, which result from burning fossil fuels for running its operations or from importing electricity to power its buildings. The company does not disclose the Scope 3 emissions created when customers burn its fossil fuels.

A Bloomberg Opinion estimate puts Aramco’s Scope 3 emissions at 1.6 billion tons, which is more than 4% of all global emissions. Even Exxon Mobil Corp., which held out the longest among Western oil companies on not disclosing Scope 3 figures, began reporting them earlier this year.

In response to questions about its latest disclosures, Aramco said that it “intends to maintain its track record of having one of the lowest upstream carbon footprints and one of the lowest methane intensities in the industry.” It added: “Aramco has a clear and deliberate path to increase details of emissions disclosure.”

While it may be true that the process of extracting oil in Saudi Arabia produces the fewest emissions per barrel, the company’s incomplete reporting makes it hard to compare the oil giant’s carbon credentials against its peers. The world is unlikely to reach net-zero emissions within decades if its top emitters don’t disclose the true extent of their impact on atmospheric carbon-dioxide levels.

Akshat Rathi writes the Net Zero newsletter, which examines the world’s race to cut emissions through the lens of business, science, and technology. You can email him with feedback.

To contact the authors of this story:
Akshat Rathi in London at arathi39@bloomberg.net
Matthew Martin in Riyadh at mmartin128@bloomberg.net