By Patricia Laya and Eric MartinBloomberg

The International Monetary Fund won’t hand over $5 billion of special drawing rights to Venezuela to bolster its reserves as part of a massive injection of resources to member nations, due to an ongoing dispute over whether President Nicolas Maduro is the legitimate leader of the country.

Venezuela in theory would be among the biggest recipients in terms of percentage of gross domestic product of a proposed $650 billion in special drawing rights that the IMF is planning to give countries to boost global liquidity. This is part of an effort to help emerging and low-income nations deal with mounting debt and Covid-19.

Some Republicans in Congress, including Senators Pat Toomey and John Kennedy, have urged U.S. Treasury Secretary Janet Yellen to oppose the creation of the reserves, saying they would reward Maduro, among other U.S. adversaries.

But Venezuela won’t be able to access the assets, which most nations will receive via a transfer to their central banks if they are approved as expected by the Fund’s board of governors in the coming months, according to the IMF. That’s because the U.S. and more than 50 other countries regard opposition leader Juan Guaido as the nation’s legitimate leader, following sham presidential elections in 2018.

“The ongoing political crisis in Venezuela has led to a lack of clarity in the international community — as reflected in the IMF’s membership — regarding official government recognition,” IMF spokesman Gerry Rice said in reply to questions from Bloomberg News.

Venezuela isn’t able to access its existing SDR holdings and won’t be able to use new ones “until a government is recognized,” Rice said.

The decision is the latest setback for Maduro’s regime, which has been largely cut off from a global financial network due to U.S. sanctions. After seven years of economic contraction following a collapse in global oil prices, the IMF’s handout of $5.1 billion would have been equivalent to 81% of the nation’s existing international reserves. 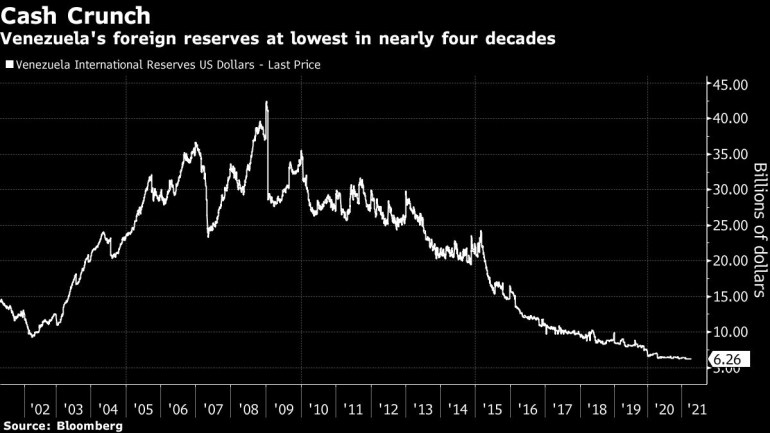 Maduro administration officials are considering whether to invite IMF officials to inspect the government’s economic data — a step known as an Article IV evaluation — in an effort to mend the relationship following a 14-year data blackout that left most economists guessing the depths of the nation’s monumental collapse, according to three people with knowledge of the matter.

Yet, because the Maduro government is barred from having contact, discussions or access to financing from the IMF until it’s recognized as the official government, that Article IV evaluation can’t presently take place.

Press officials for Venezuela’s presidency did not respond to requests for comment.

While the IMF suspended Venezuela’s access to SDRs in 2019 citing political chaos, the relationship between the two has long been contentious. In 2007, late President Hugo Chavez pledged to cut ties with the Washington organization, contending that the Fund merely served U.S. interests.

“This is the kind of initiative that a country like Venezuela could really take advantage of in the face of the ongoing crisis,” said Temir Porras, a former senior economic aide to Chavez and Maduro. “It’s time for a more pragmatic approach, not just to immediately attend to urgent health needs, but to contribute to the stabilization of our economy.”

Venezuela SDR holdings had fallen more than 99% from their allocated level as of last month, down to just $12.5 million from $3.6 billion in 2009, when it was a recipient of reserves during the global financial crisis, according to IMF data. More than two-thirds of Venezuela’s foreign reserves are in the form of gold, which has been difficult to sell because of U.S. sanctions.