Bitcoin neared an all-time high on Monday as bullish sentiment gathered steam ahead of a listing by the largest U.S. cryptocurrency exchange.

The token rose as much as 2.6% to $61,229, the highest in nearly a month, before falling back to trade little changed. On March 13, Bitcoin reached a record of $61,742. The cryptocurrency is up almost ninefold in the past year, a return that towers above that of more familiar assets like equities or bullion.

Against the backdrop of Wall Street’s growing embrace of crypto, the direct listing of digital-token exchange Coinbase Global Inc. is fanning interest. Coinbase is due to go public on the Nasdaq on April 14, the first listing of its kind for a major cryptocurrency company and a test of investor appetite for other start-ups in the sector. 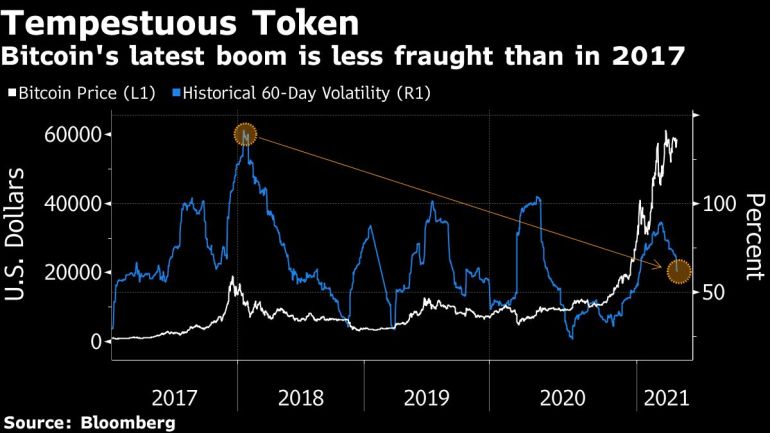 Meanwhile, exchange tokens, such as Binance Coin, are seeing their value rise ahead of Coinbase’s public debut as well. Binance’s, known as BNB, rose 23% Monday, according to CoinMarketCap.com. Huobi Token and KuCoin Token, among others, also gained.

“A crypto company moving to IPO is a big milestone,” said Nick Jones, CEO and co-founder at cryptocurrency wallet Zumo. “It’s moves like this that make consumers feel safer with crypto and ultimately boost confidence in the space.”

A growing list of companies are looking at or even investing in Bitcoin, drawn by client demand, price momentum and arguments that it can hedge risks such as faster inflation. Tesla Inc. earlier this year disclosed a $1.5 billion investment in Bitcoin and more recently started accepting it as payment for electric cars.

Elsewhere, Goldman Sachs Group Inc. has said it’s close to offering investment vehicles for Bitcoin and other digital assets to private wealth clients. Morgan Stanley plans to give rich clients access to three funds that will enable crypto ownership. The deck of exchange-traded funds tracking the token is expanding, while Paypal Inc. and Visa Inc. have begun using cryptocurrencies as part of the payments process.

A study by Dutch asset manager Robeco suggests that despite its high volatility, a 1% allocation to Bitcoin in a diversified multi-asset portfolio could be beneficial given its resemblance to gold and its near zero correlation to other asset classes.

“In recent months, a clear and emphatic narrative that Bitcoin is becoming a store of value in the form of digital gold has developed,” according to Jeroen Blokland, a portfolio manager at Robeco.

Other cryptocurrencies, such as second-ranked Ether, have also been climbing. The overall value of more than 6,600 coins tracked by CoinGecko recently surpassed $2 trillion.