Applications for U.S. state unemployment insurance unexpectedly rose last week but remained near the lowest levels of the pandemic as the labor market meanders toward full recovery.

Initial jobless claims in regular state programs increased to 719,000 in the week ended March 27, up 61,000 from the prior week, Labor Department data showed Thursday. Economists in a Bloomberg survey estimated 675,000 claims. The prior week’s figure was revised down to 658,000, which is below the Great Recession’s peak. 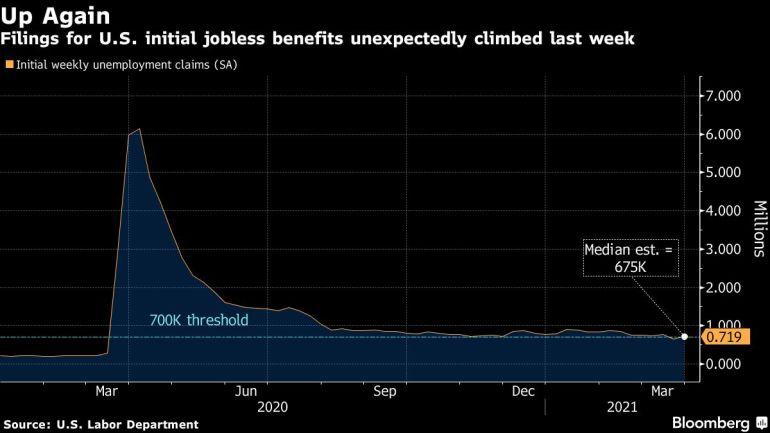 The unexpected increase in claims underscores the choppy nature of the labor market recovery and indicates it will take time to recoup the millions of jobs lost because of the pandemic. However, vaccinations are increasing and business restrictions are easing, suggesting employment will accelerate in the coming months.

Virginia, Kentucky and Georgia led states with the biggest increases in unadjusted claims from the prior week. The data have been volatile during the pandemic amid backlogs, fraud and new programs.

The figures come a day before the monthly employment report. The median forecast of economists in a Bloomberg survey calls for a 650,000 gain in payrolls in March, the most in five months, and some economists are expecting an increase of 1 million.

Historical revisions to initial and continuing claims for 2016-2020 were also released Thursday. The pandemic peak was revised down to 6.149 million initial jobless claims in regular state programs from 6.867 million.