By Elizabeth Low and Alex LongleyBloomberg

Oil gained in New York as OPEC+ started a high-stakes meeting to decide whether to extend deep supply curbs or ease them.

Crude was volatile on Thursday with a delegate earlier saying that the group would also debate a modest rollback of its production cuts, a move the market wasn’t previously expecting. At the gathering’s opening session, Saudi Arabia said that OPEC+ should remain cautious and flexible.

U.S. Energy Secretary Jennifer Granholm called her Saudi counterpart Prince Abdulaziz bin Salman on the eve of the meeting to highlight the importance of “affordable energy,” adding more uncertainty into OPEC+ output policy. A fresh virus lockdown in France but positive signs on demand from the U.S. highlight the complexity of the decision facing the producer group. 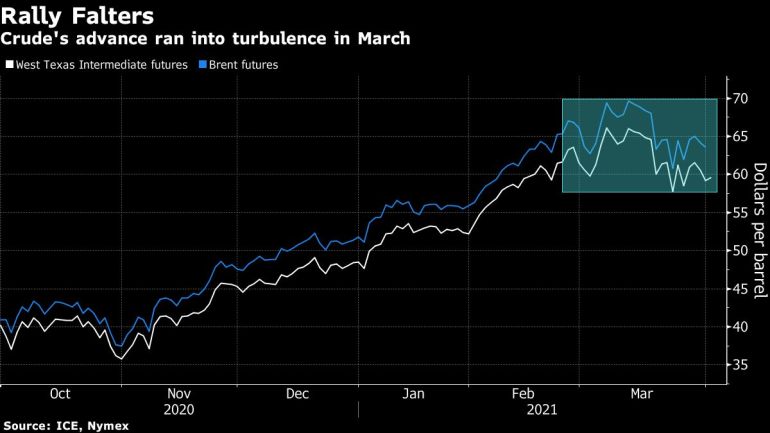 While the rollout of coronavirus vaccines and supply curbs have underpinned a fourth quarterly gain for crude, the rebound has faltered in recent weeks on concern that near-term consumption is at risk, particularly in Europe. Mohammad Barkindo, secretary-general of the Organization of Petroleum Exporting Countries, pointed this week to the market’s recent volatility as “a reminder of the fragility facing economies and oil demand.”

“A decision to delay an easing in current levels of production restraint would increase the tightness in the second-quarter and potentially boost prices ahead of the peak summer demand season,” said Ann-Louise Hittle, vice president for macro oils at Wood Mackenzie.

Data from the U.S. and Asia do bolster the case for OPEC+ to loosen the taps. Americans are driving and flying the most since the pandemic began, U.S. refineries are processing the most oil since early March last year, and the nation’s stockpiles have shrunk for the first time in six weeks.

In Asia, Japan’s large manufacturers have turned optimistic for the first time since the fall of 2019, while South Korea’s exports have risen the most in more than two years. Indian gasoline sales topped 2019 levels in March, though diesel sales were lower.

Elsewhere the picture is weaker. In Europe, France’s four-week lockdown begins on Saturday, while Italy and Germany have extended partial shutdowns. The Canadian province of Ontario, home to Toronto and the capital Ottawa, will be locked down for 28 days, CBC News said. And in South America, Brazil detected a new Covid-19 variant as it again saw record deaths.