The move is part of the Biden administration’s effort to increase racial equity and help underserved communities, and deploys funding authorized in a giant spending bill passed by Congress in December.

The new program will support “financial-services deserts, places where it’s very difficult for people to get their hands on capital so they can,” Yellen said in a statement released Thursday.

Minority-owned U.S. small businesses reported much weaker financial conditions than the average, a February survey from the Federal Reserve showed. The survey found that 88% of the firms surveyed with fewer than 500 employees said that sales were still below pre-pandemic levels.

Nearly one-third of those said their chances of survival would be at least somewhat unlikely without further government relief.

“The pandemic has made these deserts even more inhospitable,” Yellen said. 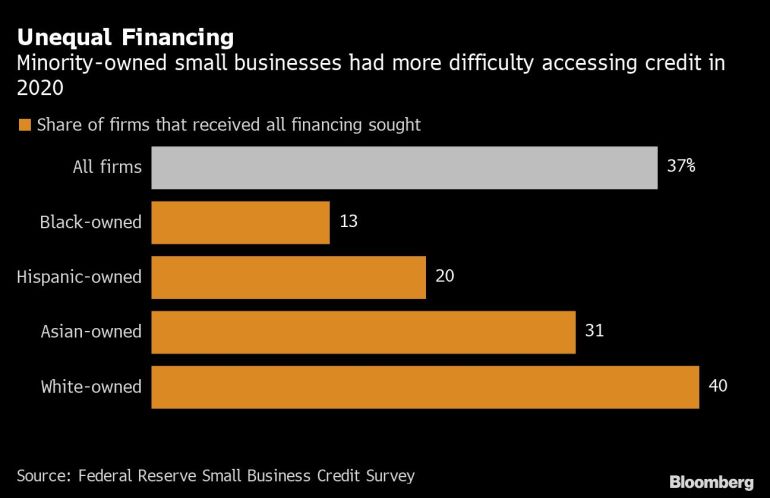 The agency on Thursday opens a 60-day application window through the Emergency Capital Investment Program, and will begin underwriting loans in May, according to a Treasury official who briefed reporters. The agency will release some details of the investments made after the loans are made, an official said.

To encourage low-cost capital for the most distressed businesses in underserved communities, the lenders won’t have to pay dividends or interest to the Treasury for the first two years, the department said.

Through the program, the Treasury is essentially taking an equity stake into financial institutions. Officials have worked with regulators to ensure that the investments are treated as equity, according to one Treasury official, in order to encourage financial institutions to leverage up the amount loaned above $9 billion. The department sees the loans being leveraged up as much as three times to $36 billion, one official said.

(Updates with details on how the program works in final two paragraphs.)
–With assistance from Christopher Condon.