Stocks and bonds sold off after Federal Reserve Chairman Jerome Powell underwhelmed markets by refraining from pushing back more forcefully against the recent spike in Treasury yields.

The S&P 500 briefly erased its 2021 gains, notching its lowest close in about five weeks. Benchmark 10-year bond rates topped 1.5% and the dollar climbed. The Nasdaq 100 extended losses from a February peak to almost 10%, and the Russell 2000 of small caps slid 2.8%. Reddit users appeared to rush back into GameStop Corp., with the video-game retailer soaring.

Powell said in an online event Thursday that he’d be “concerned” by disorderly markets, but stopped short of offering steps to curb heightened volatility. The surge in Treasury yields has triggered fears about elevated stock valuations after a torrid equity rally from the depths of the pandemic.

While bulls have decided to view the jump in rates as a sign of economic strength that could lift corporate profits, there’s been mounting concern over a potential inflation pickup. For Bleakley Advisory Group’s Peter Boockvar, the Fed has put itself in a “tough situation.”

“We are again seeing a market that is taking control of monetary policy from the Fed,” said Boockvar, the firm’s chief investment officer. “Long rates are rising right now because Powell is again very dovish. The more dovish they get in the face of market expectations of higher inflation, the more financial tightening we’ll see.” 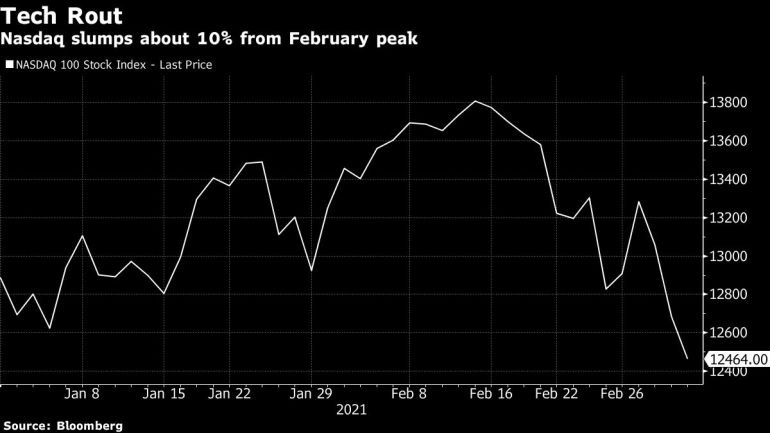 Despite the lingering uncertainties about the impacts of rising bond yields, such fears are “misplaced,” according to Candice Bangsund, portfolio manager of global asset allocation at Fiera Capital.

“As long as the back-up in bond yields reflects stronger growth expectations (versus tighter monetary policy), then the long-term bull market will not be at risk,” she said. “The latest normalization in bond yields should be viewed as an encouraging sign that growth is healing, while the prospect for a hawkish turn from the Federal Reserve is clearly not in the cards today.”

The U.S. Senate voted to take up a $1.9 trillion relief bill backed by President Joe Biden, setting off a debate expected to end this weekend with approval of the nation’s sixth stimulus since the pandemic-triggered lockdowns that began a year ago.

Elsewhere, Bitcoin’s appeal as a hedge against inflation was put to the test, with the largest cryptocurrency joining a slump in other risk assets. Oil surged after the OPEC+ alliance surprised traders with its decision to keep output unchanged, signaling a tighter crude market in the months ahead.

Some key events to watch this week:

The February U.S. employment report on Friday will provide an update on the speed and direction of the nation’s labor market recovery.