By Olivia Rockeman and Reade PickertBloomberg

U.S. private employers in March added the most jobs in six months, signaling that a pickup in Covid-19 vaccinations and business reopenings are encouraging hiring.

Company payrolls increased by 517,000 during the month and February was revised up to a 176,000 gain, according to ADP Research Institute data released Wednesday. The median projection in a Bloomberg survey of economists called for an increase of 550,000. 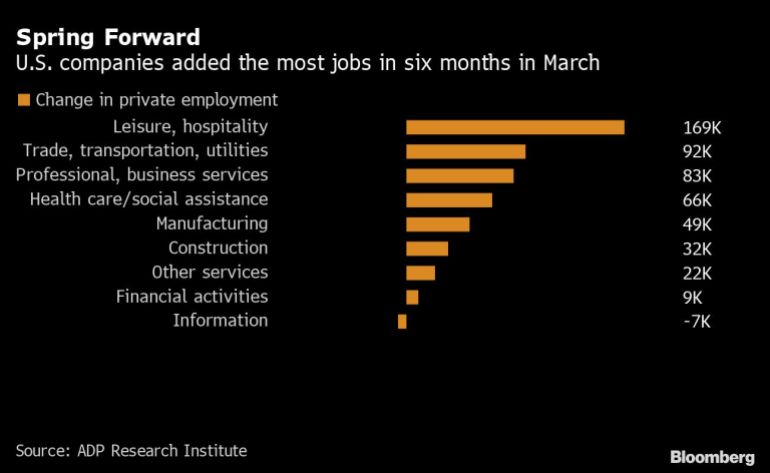 A big pickup in hiring within leisure and hospitality businesses, along with strong gains in other industries, indicate a broader improvement in the labor market that’s been slow to bounce back from the pandemic. Small and medium-size businesses showed stronger employment growth this month than large companies.

“Job growth in the service sector significantly outpaced its recent monthly average,” led by the leisure and hospitality industry, Nela Richardson, ADP’s chief economist, said in a statement. “This sector has the most opportunity to improve as the economy continues to gradually reopen and the vaccine is made more widely available.”

States have been easing business restrictions — or have lifted them altogether — and the rate of vaccinations rose above two million per day in March, which should allow for further recovery in the coming months.

President Joe Biden signed a $1.9 trillion relief bill earlier this month that includes funding for vaccines, small businesses and direct payments to households. The aid is expected to help stimulate spending and spur consumer and business confidence, which should help increase hiring.

The ADP report comes ahead of Friday’s monthly jobs report, which is forecast to show a 650,000 gain in March payrolls, with some economists projecting an increase of 1 million or more.