Piraeus, Greece – For someone who was losing $30,000 a day, Greek shipowner Yiorgos Gourdomihalis sounds very sanguine.

Hours before the Suez Canal shut down last week when one of the world’s largest container ships became wedged in the globally crucial waterway, the CEO of Phoenix Shipping and Trading had clinched a lucrative deal. The so-called time charter – an agreement between a shipowner and a charterer who wants to use a cargo ship for a specified period – would have made his company nearly half a million dollars.

But the deal fell through when the 400-metre (1,312-foot) Ever Given ran aground on March 23 while entering the canal from the Red Sea, blocking hundreds of ships at either end of the waterway that carries an estimated 12 percent of the world’s trade.

“Our charterers did not complete the paperwork the next day, because the boat would have gone through Suez. We were sorry because it was a good price, but we’ll do something else,” the second-generation shipowner told Al Jazeera.

Despite the loss of this charter, Gourdomihalis expects to be among the winners of the upset in global trade. That is because hiccups in global supply chains have historically tended to raise freight rates and shipowners’ profits.

But for those on the other side of the deal, the charterers, such interruptions can be extremely costly.

While the incident has now been resolved, it shone a light on a potential weakness in how raw materials, components and finished goods are transported through chokepoints such as the Suez Canal with possibly severe implications for the global economy.

The Greek ship-owning community, which controls more than a fifth of the world’s ocean-going merchant fleet and more than half of the EU fleet by weight, according to the United Nations (PDF), is poised for a potential bonanza in rates.

Time charters, which guarantee the owner a day rate, have the additional advantage of shifting the risk of delays to charterers. The alternative, voyage charters, in which charterers pay for a specific route regardless of its duration, tend to leave the owners exposed.

“I don’t expect many owners to be suffering. Most charters these days are time charters. Simply speaking, If a ship is delayed as a result of the vessel stuck in the Suez, the owner of the delayed vessel still gets paid by the charterer,” says Ziad Nakhleh, chief executive of TEO Shipping Corporation, another Greek owner and operator of so-called dry bulk carriers, ships that transport cargoes such as iron ore and other such commodities.

After a frantic salvage operation lasting days, the Suez Canal Authority announced on Monday that the Ever Given had been freed and was moving again. But the delays are expected to continue to ripple through the global shipping industry for weeks.

And the financial fallout is likely to be significant, analysts and shipowners say.

“This crisis led to a lot of losses for freight owners and charterers,” says Ioannis Theotokas, professor of maritime studies at the University of Piraeus.

Charterers, freight owners and insurers all assume the risks associated with price fluctuations of goods en route, and changes in the length and cost of the journey.

Theotokas believes a two-week Suez blockage could have led to trade losses similar to those during a war. “It would lead to a replay of what happened in the [1967] Arab-Israeli War, when shipping was redirected around the Cape of Good Hope, and there was an imbalance between demand and supply.”

The war led to increases in freight costs and consumer prices.

Future crises in the Suez could also cause trouble in the ports of the Mediterranean, which depend on the canal and would have to deal with large freight backlogs. Some 400 ships were reported to have been waiting to cross Suez in both directions while the Ever Given was stuck.

Here, too, the Greeks play an outsized role. With a throughput of 5.4 million containers last year, Piraeus is the Mediterranean’s biggest freight port, and fourth-largest in Europe, according to the latest data by research firm PortEconomics.

“We’re worried. We move about 33,000 containers a day. Multiply that by [a possible delay of] two weeks. The problem will be accumulation of ships that want to be serviced. It will create congestion. It won’t be easy to deal with,” says Tassos Vamvakidis, commercial manager of the Piraeus Container Terminal (PCT), which handles the bulk of container throughput at the port. “There is limited berthing. There will be delays.”

More than 5 percent of global container shipping was delayed on either end of the Suez canal or rounding the Cape of Good Hope, according to Ports Europe, a dedicated shipping news service.

PCT does not expect financial losses because there were no cancellations. A much longer crisis, however, would have imperilled new business. The reason is purely geographic, says Gourdomihalis.

“If you’re in the Indian Ocean, off Singapore or Madagascar, you can change course and go around the Cape. When you’ve arrived at the Sinai Peninsula, you have to circumnavigate all of Africa. There it will cost you two to three weeks extra. So you wait for clarity.”

Greece leased two of Piraeus’s container terminals to the China Ocean Shipping Company (COSCO) in 2009, after a seven-year lobbying effort by Athens. Greece’s argument was that off-loading containers in Piraeus saves a week’s sailing around Europe, lowering costs and speeding delivery.

Since 2009, COSCO has increased the port’s annual container throughput almost tenfold, from a starting point of 700,000. In 2016, COSCO bought a 35-year lease for the entire Piraeus Port Authority and took direct control of the remaining container terminal as well, which it plans to expand. The investment is predicated on the use of Suez.

In a protracted crisis, Piraeus would lose business to Rotterdam and Hamburg on goods still being loaded onto ships in Chinese ports, potentially taking Piraeus back to its pre-2009 days, says PCT’s Vamvakidis. “When it comes to containers bound for northern Europe that still haven’t set sail, there we [would] have great losses.” That scenario now appears to be fading.

Global trade briefly stopped flowing through Suez in 1956, when Egyptian President Gamal Abdel Nasser nationalised the canal that year, and for a period of eight years beginning with the Arab-Israeli War in June 1967.

On both those occasions, shipping rates soared, making shipowners rich. “My father used to remember those days with joy,” says Gourdomihalis.

In 1956, the legendary Greek shipowner Aristotle Onassis feared he might go bankrupt after US oil companies forced Saudi Arabia to cancel a contract naming him the exclusive conveyor of Saudi oil. The closure of Suez allowed Onassis to save his company when oil conveyancing rates went from $4 a tonne to $60.

Such a bonanza is not expected now, however. For freight rates to rise that much, a closure of months would be necessary. 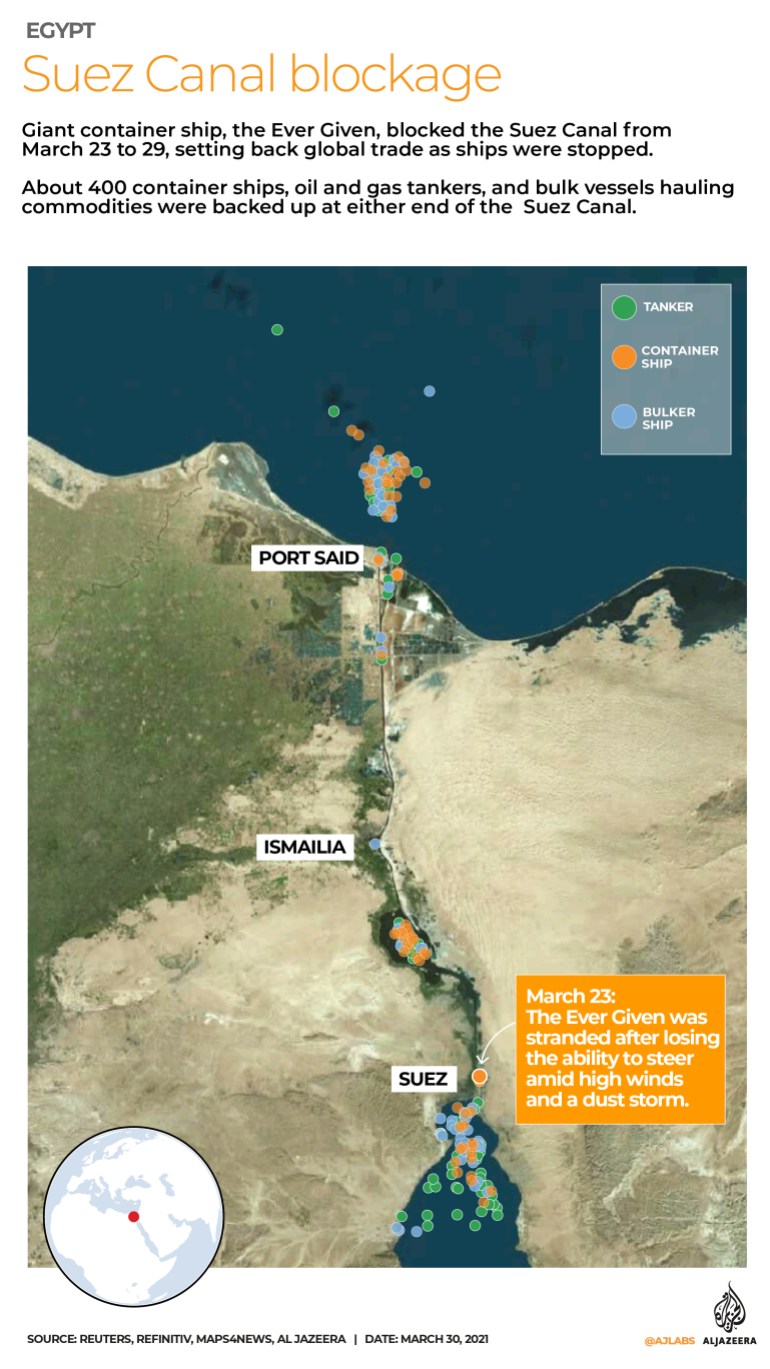