Global banks may lose more than $6bn from the downfall of United States-based Archegos Capital, the Reuters news agency reported citing sources familiar with trades involving the US investment firm, as regulators and investors feared the episode would reverberate more widely.

Japan’s Nomura and Credit Suisse of Switzerland warned of big losses from lending to Archegos for equity derivatives trades, triggering a worldwide sell-off in banking stocks.

Losses at Archegos Capital Management, run by former Tiger Asia manager Bill Hwang, sparked a fire sale of stocks including ViacomCBS and Discovery on Friday, a source familiar with the matter said on Monday.

“This is a challenging time for the family office of Archegos Capital Management, our partners and employees,” company spokesperson Karen Kessler said in a statement. “All plans are being discussed as Mr. Hwang and the team determine the best path forward.”

Archegos was unable to meet banks’ calls for more collateral to secure equity swap trades they had partly financed. Swaps or so-called contracts-for-difference are transacted off exchanges, allowing managers like Hwang to amass exposure to publicly-traded companies without having to declare it. After those positions fell sharply in value, lenders sold big blocks of securities to recoup what they were owed, the sources said.

“This is the kind of thing that happens in a speculative environment. You start finding that things go wrong,” said Richard Bernstein, the chief executive of Richard Bernstein Advisors. “When you have people making certain bets based on what has outperformed in the past and the tide turns they get burned. The question is how much leverage they used.” 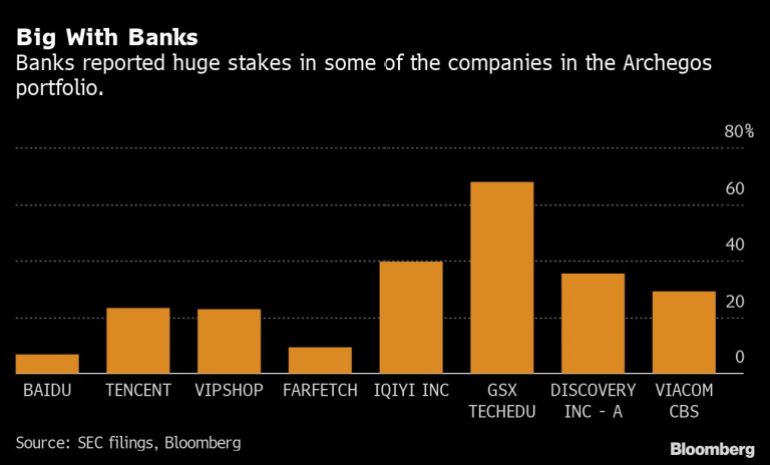 Nomura, Japan’s largest investment bank, warned of a possible $2bn loss, while Credit Suisse said a default on margin calls by a US-based fund could be “highly significant and material” to its first-quarter results.

Two sources said Credit Suisse’s losses were likely to be at least $1bn. One of them said the losses could reach $4bn, a figure also reported by the Financial Times newspaper. Credit Suisse declined to comment.

But several other banks appeared to be relatively unscathed. The financial effect on Goldman Sachs was immaterial, a separate source said. Likewise, Morgan Stanley, which sold $4bn in stocks related to Archegos on Friday, did not incur significant losses, US TV network CNBC reported.

Deutsche Bank said in a statement it had significantly lowered the risk of its exposure to Archegos without incurring any losses and was managing down its “immaterial remaining client positions,” on which it did not expect to incur a loss.

The broader market impact was muted with the US S&P 500 benchmark closing slightly lower, while financial stocks ended down more than 2 percent.

“You continue to see strength in the overall market. There is not fear of selling stocks altogether, there’s just fear in pockets of the market,” said Dennis Dick, the head of market structure at Bright Trading LLC in Las Vegas.

Investors questioned if the full effect of Archegos’ problem had been realised.

Market observers noted that only in February, hedge funds that had bet on a fall in the share price of struggling video game retailer GameStop took sizeable losses when it surged higher.

That forced hedge fund Melvin Capital Management to borrow money from another fund to stay afloat. Hedge fund deleveraging also contributed towards turmoil in the US Treasuries market in March 2020.

In the case of Archegos, the opaque and complex nature of its derivative trades, lightly regulated structure as a family office and high debt level – heightened by historically low-interest rates – prompted concern about potential systemic risk.

Regulators in the US, UK, Switzerland and Japan said they were closely monitoring developments.

Archegos bought derivatives known as total return swaps, which allow investors to bet on stock price moves without owning the underlying securities, according to one source familiar with the trades. The fund posts collateral against the securities rather than buying them outright with cash.

Archegos’ positions were highly leveraged. The firm had assets of about $10bn but held positions worth more than $50bn, according to the source who declined to be identified.

The underlying shares were held by Archegos’ prime brokers, which lent it money and structured and processed its trades. They included Goldman Sachs, Morgan Stanley, Deutsche Bank, Credit Suisse and Nomura. 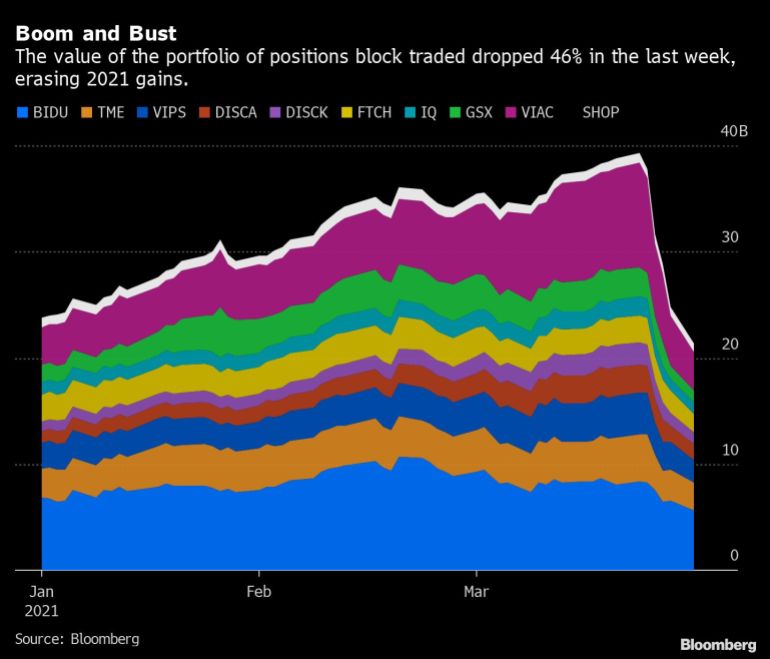 Unwinding the positions led banks to sell large blocks of stock. Shares of ViacomCBS and Discovery each tumbled approximately 27 percent on Friday, while US-listed shares of China-based Baidu and Tencent Music plunged as much as 33.5 percent and 48.5 percent last week.

Hwang, who ran Tiger Asia from 2001 to 2012, renamed the hedge fund Archegos Capital and converted it to a family office, according to a page capture of the fund’s website. Family offices act as private wealth managers and have lower disclosure requirements than other investment companies.

Hedge fund managers said they wondered why Hwang, whom several described as a “smart guy,” had made such big bets on ViacomCBS and Discovery, given the large wagers against the companies. The pair are not seen as high-growth companies, in contrast to other media stocks that have outperformed their peers during the COVID-19 pandemic, the sources said.

Hwang and his firm in 2012 paid $44m to settle Securities and Exchange Commission insider trading charges.