The digital token climbed as much as 11% before paring some gains to trade around $50,900 as of 9:51 a.m. in New York, reaching the highest level in two weeks, according to data compiled by Bloomberg.

The cryptocurrency has been volatile with prices plunging 21% last week before recovering with the earlier broad bounce back in global equities. On a technical basis, the GTI Global Strength Indicator, which detects trend fluctuations, has begun to curl upward, suggesting a bullish move for Bitcoin. 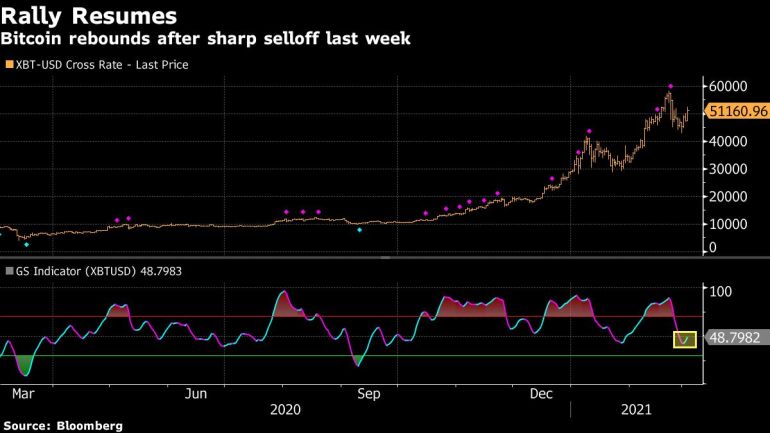 “With the return of the stimulus fueling activities in the U.S. and elsewhere – this is very good for scarce assets such as Bitcoin,” said Antoni Trenchev, managing partner and co-founder of Nexo in London, a crypto lender.

“Bitcoin is now, for the most part, steadily getting constant endorsements,” said Ed Moya, senior market analyst for OANDA. “You’re still in the early stages of this institutional interest and that’s why I think you’re probably going to have people become a lot more open minded to cryptos.”

The investments underscore a growing trend of institutional money flowing into the digital space, which is simultaneously gaining attention from regulators as the nascent industry seeks to carve out a place in mainstream finance. The outlook for the cryptocurrency industry is still under fierce debate. Proponents point to growing institutional adoption while critics say Bitcoin is a giant bubble destined to burst like its 2017 boom and bust cycle.

On Tuesday, Gary Gensler, nominee for chairman of the U.S. Securities and Exchange Commission, said that making sure crypto markets are free of fraud and manipulation is a challenge for the agency.

Gensler, who served as a CFTC chairman during the Obama administration, has been viewed as a strong advocate for digital assets. He serves as a senior advisor to the MIT Media Lab Digital Currency Initiative and teaches about blockchain technology and digital currencies.

“While the Bitcoin market reacted quickly to his comments, Gensler was largely positive about Bitcoin and cryptocurrencies,” said John Wu, president of blockchain technology firm Ava Labs. “I’m hopeful the new administration will help foster innovation in blockchains, cryptocurrencies and digital assets, instead of stifling it.”–With assistance from Joanna Ossinger and Kenneth Sexton.