Blank-check stocks slumped on a report that U.S. regulators are scrutinizing one of the hottest corners of the equity market.

The IPOX SPAC Index, which tracks special-purpose acquisition companies, extended its selloff into an eighth consecutive day. The gauge is still up 45% since the end of July, compared with a gain of 20% for the S&P 500 Index. Bill Ackman’s Pershing Square Tontine Holdings sank as much as 6.1%. Social Capital Hedosophia, the partnership between serial dealmakers Chamath Palihapitiya and Ian Osborne, slid more than 8% earlier Thursday.

Officials at major firms are anticipating letters from the U.S. Securities and Exchange Commission asking about the potential dangers of underwriting a deluge of deals from SPACs, according to two people familiar with the matter. For now, the inquiry appears to be mostly fact-finding, but it could turn into something more formal depending on what regulators uncover, one of the people said. Reuters previously reported the SEC’s inquiries into the industry. 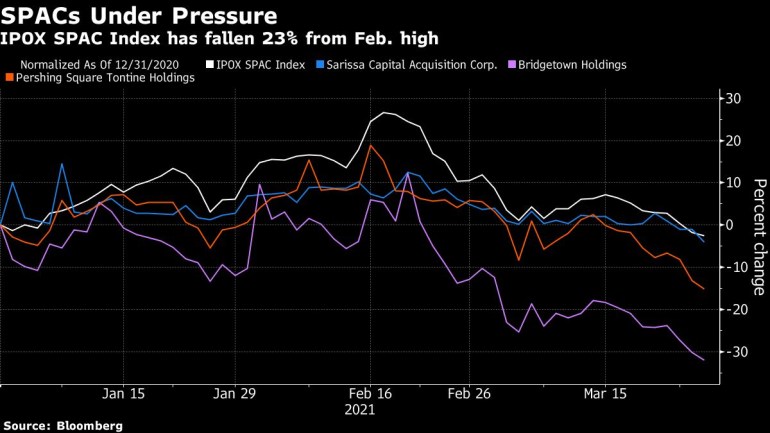 Regulators may be stepping up their oversight of those companies after a frenzy that has attracted the likes of celebrities including Shaquille O’Neal, Colin Kaepernick, and Alex Rodriguez as well as a who’s who of Wall Street titans. In the past 12 months, more than 700 SPACs have flocked to New York exchanges, seeking to raise about $227 billion, according to data compiled by Bloomberg.

“There have been too many new issue listings and the market simply cannot handle the overflow,” said Christopher Matthaei, a partner at Elevation Securities, which conducts SPAC research.

SPACs are firms that raise money for buying businesses. The reason they’re known as blank check is that they generally don’t have a merger target when they are formed. It’s as if investors are giving the sponsor a blank check to use.

The first recorded listing of a blank-check company dated back to 1993, according to Bloomberg’s data.