One of the largest cargo container ships in the world has turned sideways and blocked all traffic in Egypt’s Suez Canal, threatening to disrupt a global shipping system already strained by the coronavirus pandemic.

The MV Ever Given, a Panama-flagged container ship that carries trade between Asia and Europe, became grounded on Tuesday in the man-made waterway dividing continental Africa from the Sinai Peninsula.

Evergreen Marine Corp., a major Taiwan-based shipping company that operates the ship, said in a statement that the Ever Given had been overcome by strong winds as it entered the Suez Canal from the Red Sea but none of its containers had sunk.

As maritime authorities in Egypt had to reopen an older section of the Suez Canal to divert traffic after the Ever Given blocked it in both directions, an expert said that the incident is a reminder of the vulnerability of the passage.

“This is a major strategic waterway, a choking point, so a lot of ships go through it and if something happens it can be very disruptive for shipping and the global community to get goods from one another,” Gerry Northwood, Chairman of the risk and security management company MAST, told Al Jazeera.

Such an incident, Northwood explained, it’s “a bit of a warning .. of a reminder” of the vulnerability of the canal and its potential for global disruption.

“If you end up having to revert to using the longer route then you will get two to three weeks of disruption to world trade whilst it tries to sort itself out, plus the added expenses of the longer journey,” he said.

Shipping sources said that if delays in freeing the Ever Given extend, ships could potentially start re-routing around Africa, which takes a week longer to navigate, if they were unable to sail through the Canal.

So far, there are at least 30 container ships being affected by the disruption.

“If there is a significant delay, then it is likely that the Cape of Good Hope will serve as an alternative route to keep things moving,” he added.

Disruptions caused by the coronavirus and a surge in demand for retail goods by consumers have led to wider logistical bottlenecks around the world for container lines and supplies in recent months.

The Suez Canal Authority’s Chairman Osama Rabie told local media that despite the blockage caused by the Ever Given, a southbound convoy was on the move and that the authority was trying to keep traffic flowing between waiting areas as best it could while salvage efforts continued.

“Once we get this boat out, then that’s it, things will go back to normal. God willing, we’ll be done today,” said Rabie.

The authority was considering compensation for delayed ships, he added.

Eight tug boats have been deployed to free one of the world’s largest container ship, though local sources said efforts could shift towards digging the ship out if the marine vessels were unable to release it.

Dutch marine services company Boskalis said its subsidiary Smit Salvage had been hired to help with the operation and was sending 10 people to Egypt.

In such cases, “you really have to do the calculations to understand how solidly she (is) grounded, and how much power you can exert without damaging the vessel,” Boskalis spokesman Martijn Schuttevaer told Reuters.

Bernhard Schulte Shipmanagement (BSM), the ship’s technical manager, said the Ever Given had run aground in the canal at around 05:40 GMT on Tuesday. It said an investigation was underway.

BSM, which handles the ship’s crew and technical issues, said all the crew were safe and there had been no reports of injuries or pollution. It said it had notified the authorities and “interested parties”, but that it could not confirm the ship’s owner.

The Ever Given is still grounded and canal authorities are working to refloat it, according to an official at marine agent GAC.

Ahmed Mekawy, an assistant manager at GAC’s Egypt office, told Reuters that a previous report saying that the ship had been partially refloated was inaccurate.

A view of the Ever Given from above

Satellite images show the position of the Ever Given vessel on Tuesday at 08.35 GMT as it was blocking the Suez Canal.

More imagery from space courtesy of @sentinel_hub, waiting for the high res. pic.twitter.com/eCMS2Sgyh5

Ship in blocked convoy in Suez Canal on move, say source and witness

The first ship from a convoy that had been blocked by the stranded vessel in the Suez Canal is on the move, indicating a resumption of traffic in the waterway, a shipping source and witness told Reuters.

Port agent GAC said the stranded ship had been partially refloated and moved alongside the canal bank.

A large part of the bulbous bow of the Ever Given was stuck in the shore of the Suez Canal, as excavator cranes were seen trying to dig out the the ship.

Wow.. It seems there almost all bulbous bow of the Ever Given stick in the shore.. Considering the mass and size of the vessel, it is understandable why they still cannot pull it out.
For comparision pic.twitter.com/nzpt0gXLjB

Tankers blocked from traversing in both directions

Tracking maps shown the ship grounded in the southernmost stretch of the waterway, between the Great Bitter Lake and the Red Sea port of Suez.

At least 30 ships were blocked to the north of the Ever Given, and three to the south, local sources said. Several dozen ships could also be seen grouped around the northern and southern entrances to the canal.

A mega containership called EVER GIVEN got stuck in the southern end of the Suez Canal and has now blocked off a lot of fully-laden tankers from traversing in either direction. Tankers carrying Saudi, Russian, Omani and US oil are waiting on both ends. #OOTT @MarineTraffic pic.twitter.com/sGu2ztN9O5

🇷🇺As a result of the incident in the Suez Canal, a missile corvette "Stoyky" of the Baltic Fleet of the Russian Navy was "stuck" on the approaches to it from the Red Sea.

The Russian ship previously performed tasks to ensure the safety of navigation in the Gulf of Aden. pic.twitter.com/5WiWT62EHR

GAC said on Wednesday on its website that 15 other ships in the northbound convoy behind the Ever Given were detained at anchorages waiting for the canal to be cleared. A southbound convoy was also blocked.

Egypt’s Suez Canal opened 150 years ago. Since then, it has been regularly expanded and modernised and today is capable of accommodating some of the world’s largest supertankers.

Here is a look back at key stages in the enlargement of the waterway, which handles roughly 10 percent of international maritime trade.

The container ship has been partially refloated in the canal and traffic is expected to resume soon, port agent GAC told Reuters.

Egypt’s Suez Canal Authority (SCA) said it was working to refloat the ship, with the authority’s chairman saying older sections of the canal were being opened in a bid to ease the bottleneck of backed-up marine traffic.

Pictures posted on social media showed the ship positioned diagonally across the canal, blocking its full width. Photos shared by the SCA showed a digger removing earth and rock from the bank of the canal around the ship’s bow.

Oil prices climbed as investors assessed the impact on global crude flows after the ship ran aground, Bloomberg reported.

Ten crude tankers could be affected by Suez Canal blockage

Ten tankers carrying 13 million barrels of crude could be affected after a container ship ran aground in the Suez Canal, blocking vessels passing through, oil analytics firm Vortexa said on Wednesday.

The approximate rate of backlog is about 50 vessels a day and any delays leading to re-routings would add 15 days to a Middle East-to-Europe voyage, Vortexa told Reuters news agency.

The uncertainty over the blockage sent oil prices up, as investors tried assessed the impact on the global crude market.

A Egyptian official, who spoke to The Associated Press news agency on condition of anonymity as he was not authorised to brief journalists, blamed a strong wind in the area for the incident.

Egyptian forecasters said high winds and a sandstorm plagued the area on Tuesday, with winds gusting as much as 50km/h (31 mph).

Egypt’s Alexandria and Dekheila ports, which both lie along the Mediterranean, were closed on Wednesday due to poor weather conditions, the Alexandria Port Authority said in a statement. 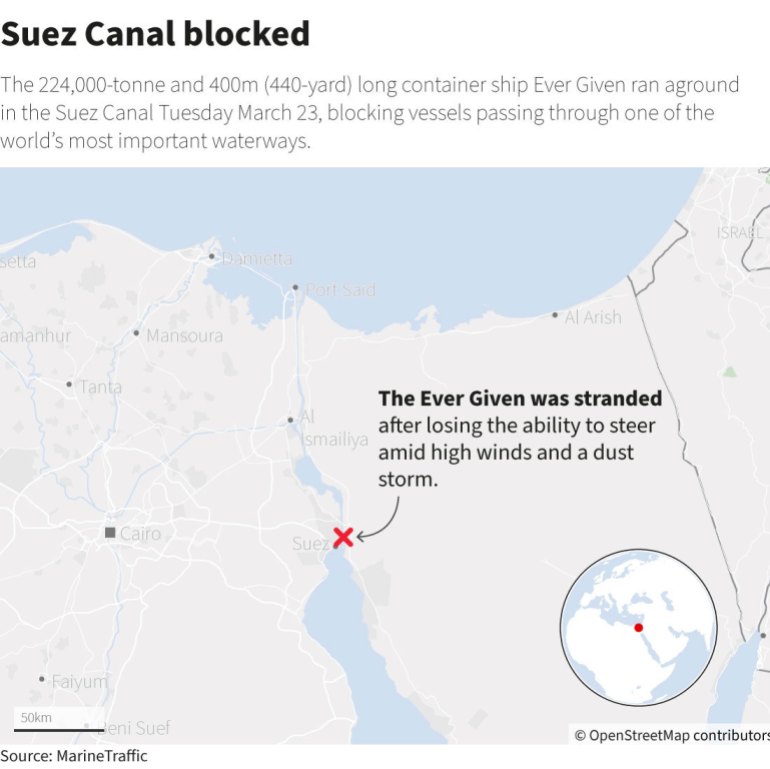