Even the worst performance in almost a year is doing little to diminish demand for Cathie Wood’s brand.

The ARK Innovation ETF (ticker ARKK), the main fund at Wood’s Ark Investment Management, notched its second-biggest inflow ever on Friday, according to data compiled by Bloomberg.

The $464 million injection came on the heels of a four-day rout that had sent the exchange-traded fund down more than 15%, showing the willingness of investors to buy the dip. 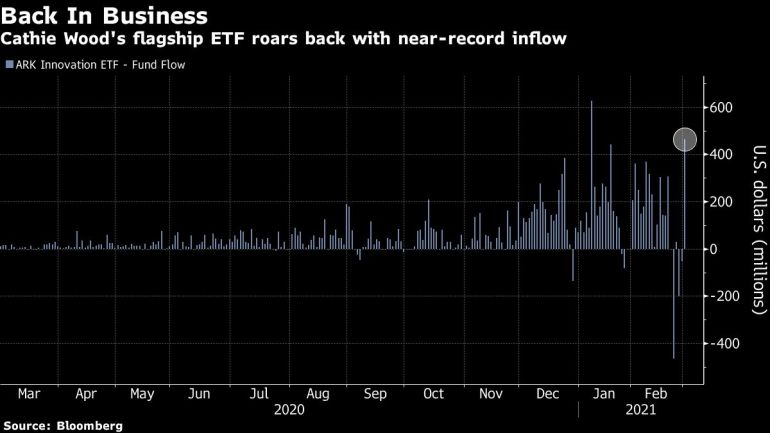 Spooked by rising bond yields, traders punished the pricier parts of the equity market last week, including many of ARKK’s top holdings, like electric carmaker Tesla Inc. But the pain has proved fleeting and ARKK posted its best day in nearly two months on Monday as stocks rallied across the board.

The “rebound in equities and especially technology stocks were a delightful surprise to Ark Innovation ETF,” Saxo Bank’s Chief Investment Officer Steen Jakobsen wrote in a note. Jakobsen cautions though that the “Tesla-Bitcoin-Ark risk cluster could still induce volatility in equities.”

Wood’s rough week at one point trimmed assets in ARKK, which returned 149% in 2020, by some $5 billion. While considerable, that remains a fraction of the firm’s ETF assets under management, which last month climbed to more than $60 billion.

In spite of Monday’s rebound, bearish bets continue to mount against ARKK. The percentage of shares sold short in the fund has reached a record of almost 5%, according to IHS Markit data.

The ETF was little changed in early trading in New York on Tuesday. It’s up 9.8% this year.

–With assistance from Cecile Gutscher.