By Cagan Koc and Tugce OzsoyBloomberg

The Monetary Policy Committee led by Governor Naci Agbal lifted the one-week repo rate to 19% from 17% on Thursday, beating the 100-basis-points hike predicted in a Bloomberg survey of 24 analysts.

Considering the upside risks to inflation expectations, the bank has decided “to implement a front-loaded and strong additional monetary tightening,” it said in a statement accompanying its decision. 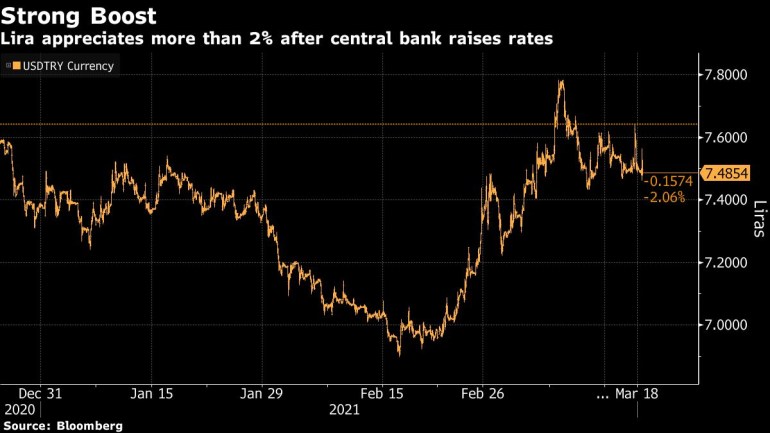 “In a challenging context of domestic business and political pressure against further interest rate hikes, the CBRT has stepped up to the plate and delivered a resounding home run to underline its commitment to an inflation-targeting framework,” said Phoenix Kalen, London-based director of emerging-market strategy at Societe Generale. Today’s move “will go a long way toward bolstering both retail and foreign investor confidence that the CBRT under Governor Agbal will stay engaged in addressing deterioration in inflation expectations.”

Inflation accelerated for a fifth month in February as oil rallied and the impact of last year’s lira weakness lingered. The upward trend fueled expectations the central bank would try to rein in prices by raising interest rates.

Oil prices skyrocketed from below $20 a barrel at the height of global coronavirus lockdowns last year to nearly $70 as the rollout of Covid-19 vaccines improves the demand outlook and output cuts from OPEC+ members tighten supply. The rally has since shown signs of fraying but crude is up more than 30% this year and around 2% this month.

The recent depreciation of the lira, which has lost more than 8% against the dollar since mid-February, is also putting pressure on Agbal. The currency’s weakness is mostly related to the spike in U.S. Treasury yields, which has triggered a developing-nation currency selloff.

After taking over in November, Agbal ended a complicated funding structure and hiked the one-week repo rate by 625 basis points, boosting the bank’s credibility among investors. Despite the recent decline, the lira has strengthened around 14% under his watch, as expectations grow that Turkey’s returning to more orthodox monetary policy. He stood pat in the first two meetings of this year, opting for hawkish messages. 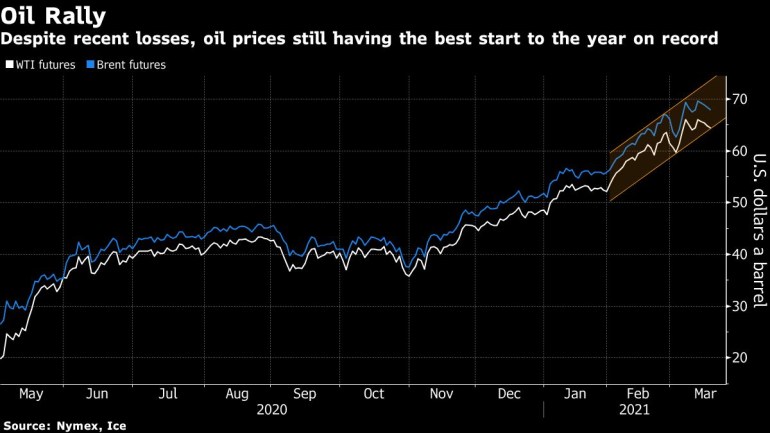 The governor has pledged to maintain a tight monetary policy stance until he meets his 5% inflation target, no earlier than 2023. The Turkish statistics agency will publish March inflation data on April 5.