In the usual business cycle, demand pushes prices up, and supply increases to try to capture that windfall, sending prices down again. In a supercycle, supply is so inadequate to demand growth that prices rise for years, even a decade or more.

Before we examine the current possible supercycle, we should take a brief look back at the last two. In the 1970s, spiking oil prices created a boom that lasted into the early 1980s. In the early 2000s, China’s demand for copper, steel, aluminum, coal, and copper kept prices high through 2014, with a spike thanks to record high oil prices in 2008.

On this long timeline, we can just see the emergence of today’s possible supercycle. 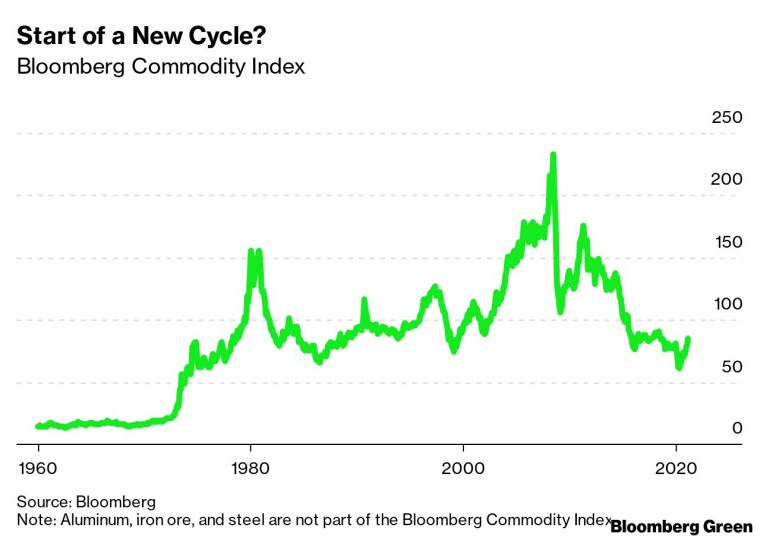 Two components of this potential supercycle – oil and gas and metals – are relevant to decarbonization prospects. They’re also increasingly connected to each other.

First, oil and gas. One indicator in favor of a potential supercycle is the very low investment in oil and gas exploration. As prices fell from above $100 a barrel in 2014, capital expenditure fell, too. In real dollar terms, oil and gas capex is at about the same level as 15 years ago, when oil demand was 10% lower than at the end of 2020, and more than 15% lower than it was prior to the pandemic. 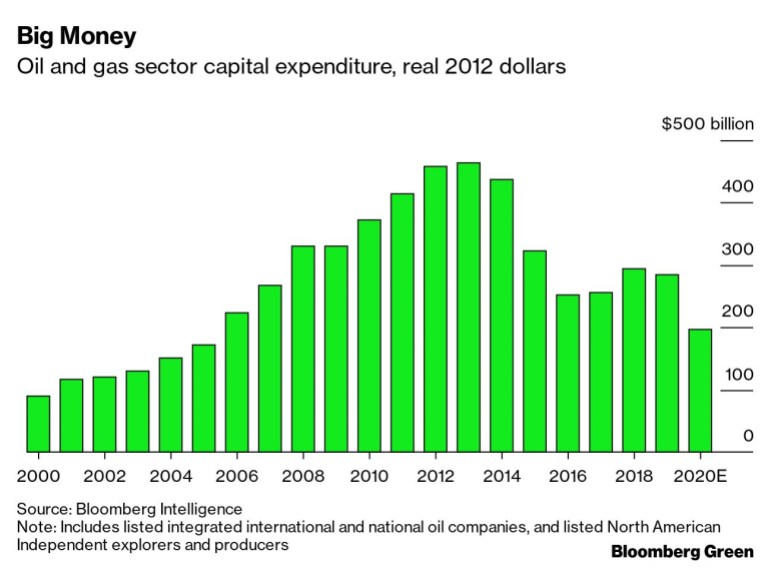 Two things could counteract that. Number one: If oil and gas prices rise consistently and the returns on capital increase, investors might demand more investment. Number two: Spare production capacity amongst the Organization of the Petroleum Exporting Countries spiked during the pandemic to more than 10 million barrels per day and remains far higher than at any point this century. That spare capacity could be a release valve on high prices, as could a resurgence in U.S. shale production if prices are high enough to support new investment (and if capital markets are willing to fund it). 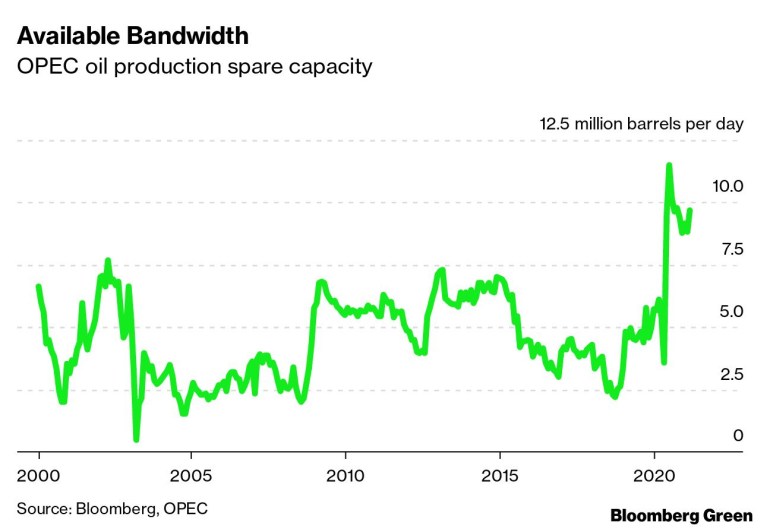 With the International Energy Agency predicting that global oil demand won’t rebound to pre-Covid levels until 2023, OPEC’s spare capacity could be very relevant—especially if oil demand has already peaked, as BP Plc said last year. That’s not to say that prices won’t keep increasing, but rather that the sector has mechanisms in place to meet demand.

Now, though, to metals, albeit in a roundabout way.

It’s always been true that rising oil prices will push consumers to seek alternatives. In the 1970s, oil was still widely used as a power generation fuel, and coal-fired generating capacity was added to replace it when oil prices soared. In transportation, however, alternative fuels and electric powertrains were pipe dreams.

This time, there are alternatives to oil in surface transportation which are technically effective, increasingly economically competitive, and globally available. The last time oil was $100 a barrel, in 2014, only 300,000 electric passenger vehicles were sold. Last year, that figure was 3.1 million; this year, it’s likely to be closer to four-and-a-half million. The expanding EV fleet reduces oil demand; add in the world’s two- and three-wheel light electric vehicles, and buses, and we’re already looking at a million barrels a day of avoided oil demand as of 2019. 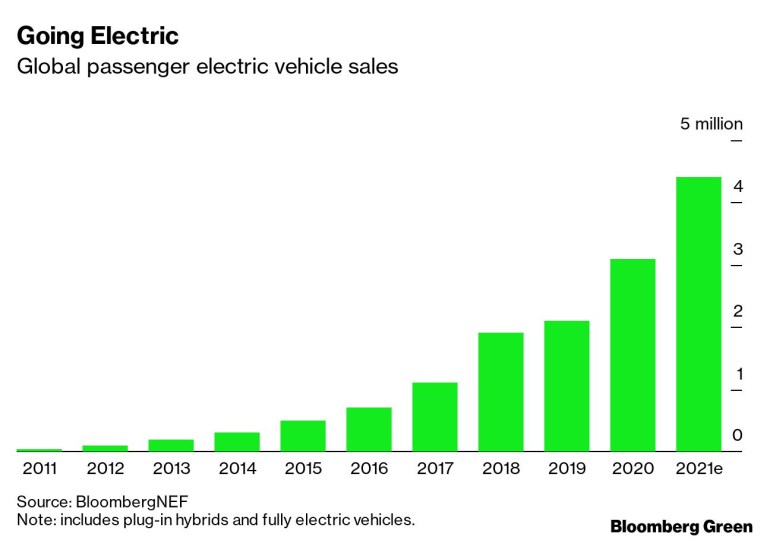 The world’s metals producers stand to benefit from increasing electrification, and not just in the transport sector. BloombergNEF estimates that global copper demand in both the clean power and the clean transport sectors will double in the next decades, to almost 5 million tons per year. Copper demand this year is expected to be about 24 million tons, so that jump would be a material increase. 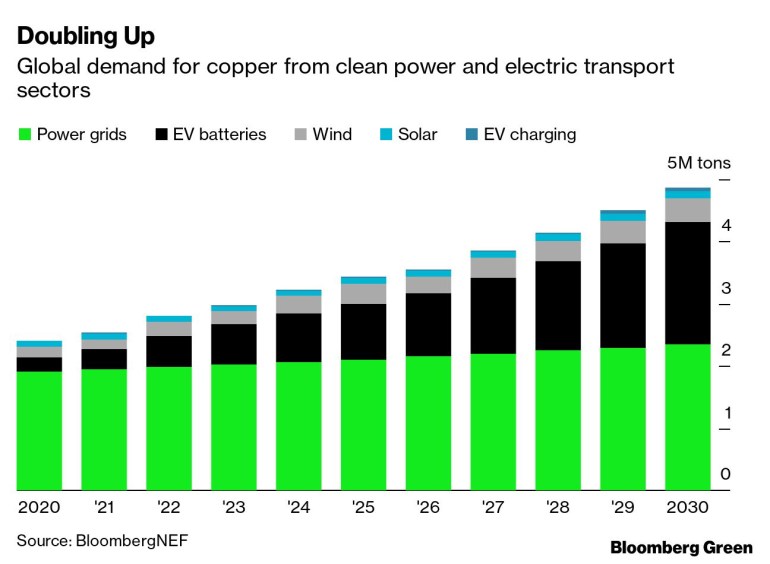 This time, reducing demand for one commodity (oil) would boost demand for another (metals) in a way that really could be sustained for years or decades. The companies meeting that demand will be under increasing scrutiny, with investors and the public deeply interested in the environmental sustainability and carbon intensity of their extraction and processing. If we enter a metals supercycle, it will be a cleaner one, with the potential to decarbonize part of the economy and reduce emissions in the process.