Australia’s housing market is booming again, with the biggest monthly price gain in 17 years dispelling fears of a Covid-induced downturn.

“Australia’s housing market is in the midst of a broad-based boom,” said Tim Lawless, head of research at CoreLogic. The rapid gains have been “spurred on by a combination of record-low mortgage rates, improving economic conditions, government incentives and low advertised supply levels.”

While housing prices are surging from Singapore to Canada and the U.S., a return to boom times in Australia threatens to swell an already worrisome pile of household debt and make it harder for young people to get a foot on the property ladder. Sydney is the world’s third-least affordable housing market, and Melbourne the sixth, according to a report last week. 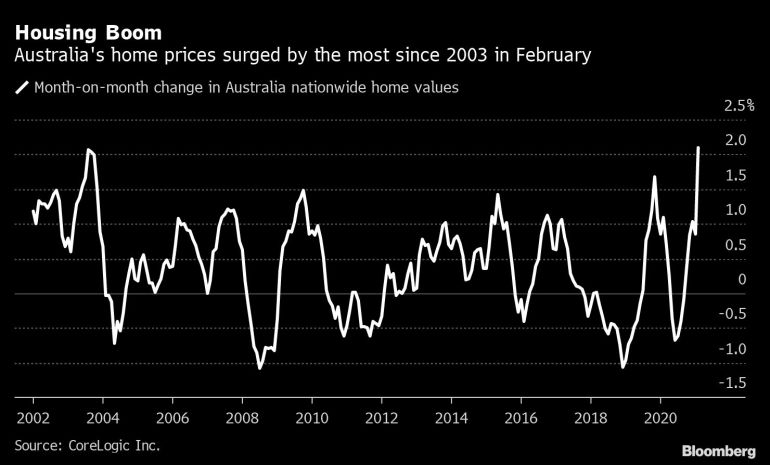 The nation’s property values have taken off again after the central bank slashed interest rates to a record low and said they’ll stay there for at least three years. People are also looking for larger houses with space to work from home, while the rapid price growth has rekindled a fear of missing out, sending buyers flocking to the market. That could see home prices surge 16% over the next two years, according to Commonwealth Bank of Australia, the nation’s largest mortgage lender.

An auction for a small, dated two-bedroom house in the inner Sydney suburb of Paddington on a recent Saturday attracted more than 250 people. Bidding began at A$1.4 million ($1.1 million) — A$150,000 over the reserve and immediately knocking most would-be buyers out of the race. It eventually sold for just shy of A$1.7 million, A$450,000 above the reserve.

“We are seeing a significant increase in demand across all price points and all suburbs,” said real estate agent Ben Collier, who handled the Paddington sale. Usually “you see different markets moving at different speeds, whereas it seems to be somewhat more uniformed right now.”

In New Zealand, where home prices soared 13% in January from a year earlier, the problem is so acute the government will now require the central bank to consider the impact on housing prices when setting interest rates, a change the bank opposed. The Reserve Bank of New Zealand is also reimposing lending restrictions on property investors in an attempt to cool the market.

“While rising house prices are likely to bolster aspects of household consumption via wealth effects and confidence, surging asset prices and loan approvals also present an emerging financial stability challenge for the RBA and APRA. A re-emergence of macroprudential policy constraints is a risk over coming months.”

Fears that Australia’s housing market would be flooded by distressed sales as people were thrown out of work by the pandemic have faded as the economy recovers faster than expected, and people resume paying their mortgages after being offered six-month loan holidays last year.

Instead, a shortage of supply is helping fuel the price boom. The number of houses advertised for sale in the first three weeks of February was down 26% from a year earlier, CoreLogic said.

“Housing inventory is around record lows for this time of the year and buyer demand is well above average,” Lawless said. “These conditions favor sellers. Buyers are likely confronting a sense of FOMO, which limits their ability to negotiate.” 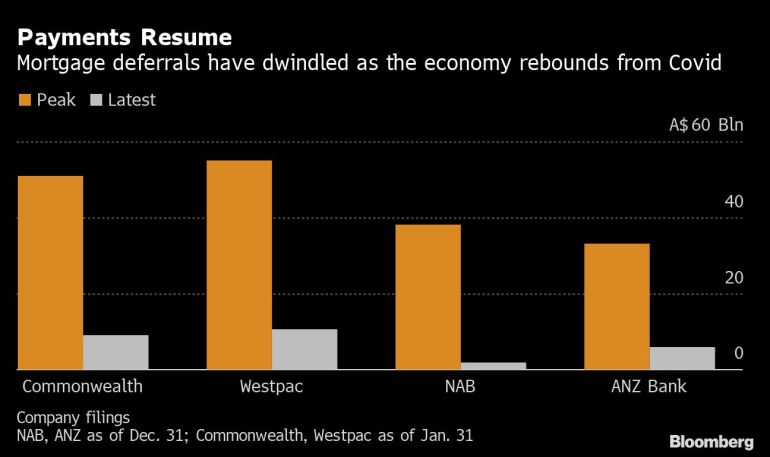 In another sign of strength in the housing market, home-loan approvals rose 10.5% in January, Australian Bureau of Statistics data showed Monday.

Home prices could rise about 20% over this year and next, according to Westpac Banking Corp.

“The upturn is being supported by record low interest rates; the confident expectation amongst borrowers that these rates will remain low for years to come; ample credit supply; and an improving economic backdrop as the roll-out of vaccines promises to bring the pandemic to an end,” the bank’s economists said in a report last week.