By Lynn Thomasson and Eric LamBloomberg

Bitcoin surged to an all-time high after Tesla Inc. said it’s invested $1.5 billion, becoming the biggest company yet to back the controversial cryptocurrency.

Bitcoin jumped as much as 15% after Tesla made the disclosure in a regulatory filing, with prices exceeding $44,000 for the first time. Tesla also said it would begin accepting the digital token as a form of payment for its electric cars.

That Tesla, one of the world’s most influential companies, and billionaire Elon Musk have thrown their weight behind Bitcoin is a massive sign of support for the cryptocurrency, which has been criticized by policymakers for facilitating money laundering and fraud.

“The world’s richest man allocating $1.5 billion of his company’s treasury to Bitcoin speaks volumes about the magnitude at which crypto gains institutional adoption,” said Antoni Trenchev, managing partner and co-founder of Nexo in London. “Tesla has now paved the way.” 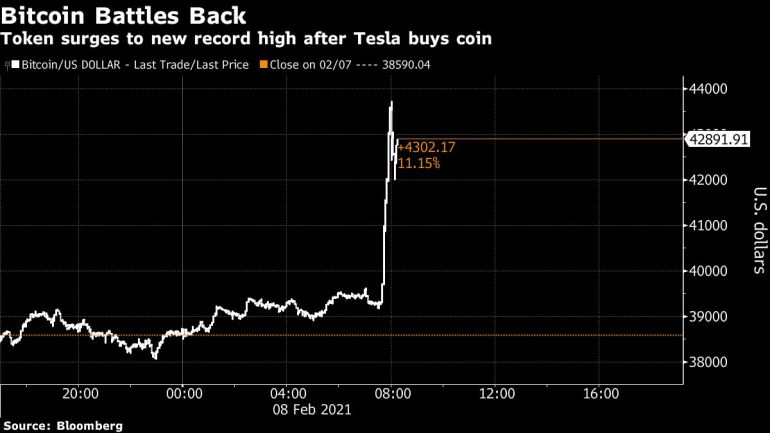 Trenchev said he expects that at least 10% of S&P 500 companies will be invested in Bitcoin by the end of 2022.

Other companies have made similar investments in Bitcoin. MicroStrategy Inc. has spent some $1.1 billion on the token. In October, Square Inc., headed by longtime crypto advocate Jack Dorsey, announced that it converted about $50 million of its total assets as of the second quarter of 2020 into the token. Proselytizers like Bill Miller of Miller Value Partners have said this was just the start of what was sure to be a trend across Main Street.

Bitcoin’s journey to a record has been marked with big swings that continue to stoke uncertainty about its outlook. Some see speculators at work and an inevitable bubble bursting. Others cite high-profile backers and interest from long-term investors as evidence of a more durable rally.

Predictions for Bitcoin’s possible long-term price range from $400,000 and more to zero. The token is designed to have a fixed supply of 21 million coins, underpinned by a digital ledger distributed across computer networks.