By Verity Ratcliffe and Souhail Karam and Salma El WardanyBloomberg

Algeria’s energy exports are plunging, threatening more financial suffering for the OPEC member and a potential repeat of the mass demonstrations that toppled the president two years ago.

The North African nation’s struggling to keep up shipments of oil and gas – the lifeblood of the economy – as years of mismanagement and a lack of investment take their toll. The decrease is so severe that Algeria might cease to be an crude exporter within a decade, according to Cherif Belmihoub, a minister in charge of economic projections.

“Algeria is no longer an oil country,” he told state radio last month.

Benchmark Brent crude edged above $60 a barrel on Monday for the first time in more than a year, but prices are still less than half what Algeria needs to balance its budget, according to the International Monetary Fund. Its fiscal break-even of $135 a barrel is higher than that of any other producer in the Arab world, the IMF calculates.

“Algeria’s leadership is being battered relentlessly,” said Jalel Harchaoui, a senior fellow at the Geneva-based Global Initiative, a non-governmental organization. “For the first time in about two decades, Algiers must make politically-painful and symbolically-charged decisions in order to find dollars.” 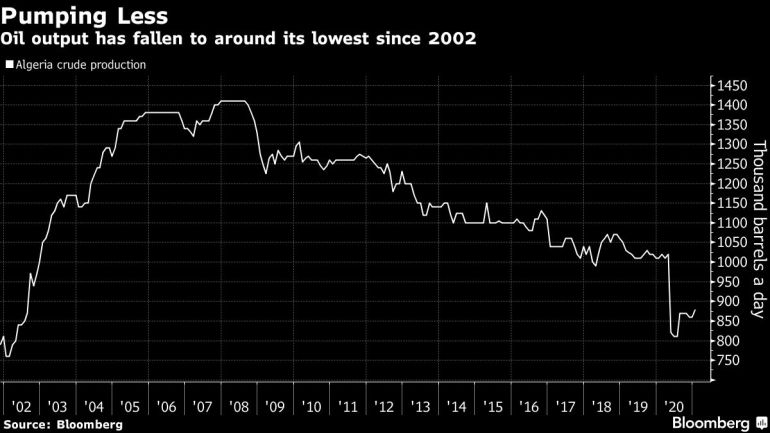 The nation’s exports of crude and liquefied natural gas each declined around 30% in 2020, according to Bloomberg ship-tracking data. The trend’s continued this year. Oil sales abroad fell to just 290,000 barrels a day last month, 36% less than in December and the smallest figure since at least 2017.

Algeria and other members of the Organization of Petroleum Exporting Countries agreed to cut production last year as the coronavirus pandemic grounded planes and shut down factories. Yet, while the majority of OPEC nations breached their quotas, Algeria mostly failed to reach its cap. Overall oil output rose slightly in January but is still around the lowest since 2002.

With its production anemic, Algeria may miss out on the recent recovery in crude. Brent futures have climbed more than 50% since the start of November thanks to the roll-out of Covid-19 vaccines and rising demand in China.

The nation also failed to take advantage of surging LNG prices in mid-January because it lacked surplus gas to sell on the spot market, traders said.

Algeria’s gas output fell in 2019 to at least a decade-low, according to the Gas Exporting Countries Forum. At the same time, the country is burning more of the fuel in local power plants as its population rises, leaving less room for exports.

Prime Minister Abdelaziz Djerad has ordered spending cuts to stabilize the country’s finances. But his government is wary of reducing subsidies on power and food.

“Algeria has one of the largest welfare budgets per capita of its OPEC peers,” said Bill Farren-Price, a director at energy research firm Enverus. Sustaining social spending “will be essential if mass protests are to be avoided.”

State energy firm Sonatrach said it aims to boost gas exports by around 25% this year, even while slashing spending. The company’s past efforts to raise energy production have been hindered by frequent changes of management. It’s had four chief executive officers in the last two years and 12 since 2010.

“Constant changes at the top of Sonatrach have not made it easy to manage the sector,” said Farren-Price. “There are a lot of pressures.”

Algeria has hinted at allowing more foreign investment in the energy sector. But it remains one of Africa’s most closed-off economies, and politicians are reluctant to let international companies exert more control over the country’s resources.

The government’s also nervous about tapping the IMF or global bond investors for money that it could invest in oil and gas fields.

“As things stand now, that money will likely have to come from abroad,” said Global Initiative’s Harchaoui. “And that raises the painful question of sovereignty. Borrowing money or giving up equity in operations — both are seen as a compromise on sovereignty.”

(Updates with details on LNG constraints in ninth paragraph.)