Millions of U.S. adults have relocated – either temporarily or permanently – during the pandemic, but the reasons for moving have changed over time.

In June, 28% of those who moved due to the pandemic cited the higher risk of being infected with Covid-19 where they had been living as the most important reason, according to a Pew Research Center poll. Just 18% said financial reasons, including job loss.

But Pew’s November survey showed a complete reversal, with a third of respondents citing financial reasons and unemployment as their primary motivator for relocating. Just 14% cited fears of contracting Covid-19 — half of the June share. 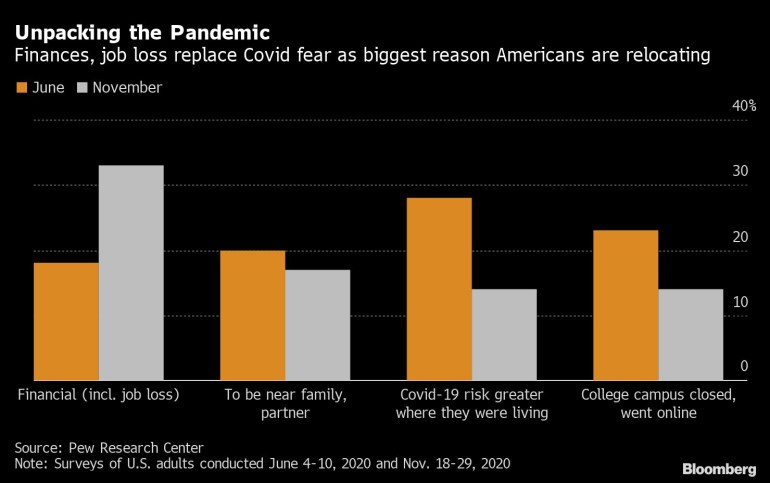 The latest data are a clear example of the financial fallout of the coronavirus-driven downturn. Millions of Americans remain out of work. Many have struggled to pay their bills and are relying on food banks to put food on the table. There are still nearly 10 million fewer jobs than there were last February, and Americans continue to file hundreds of thousands of applications for unemployment benefits each week.

Those age 18 to 29 were more likely than any other group to move due to the outbreak, in part due to college campuses closing and going to remote learning. In fact, a Pew Research Center analysis in September found a majority of young adults lived with their parents — a level not seen since the Great Depression era. Hispanic and Black adults were also more likely to relocate due to the virus than Whites, the survey found.

The latest survey also highlighted the divergence in the economic realities of Americans during the pandemic. Adults in lower-income households were more likely to move than their wealthier counterparts as a result of the pandemic. But about 1 in 10 who moved due to the virus relocated to a vacation home.

Some people have moved back, with 31% saying they returned to the same home where they were living before the health crisis. Some 69% of those who moved due to the pandemic said they are currently living in a different home than where they previously lived.