By Patrick Sykes and Baris BalciBloomberg

The population of Istanbul province shrank 0.4% to 15.46 million, reversing record 3% growth the year before, according to data published by the statistics office on Thursday. The trend followed patterns seen elsewhere around the world during the pandemic. 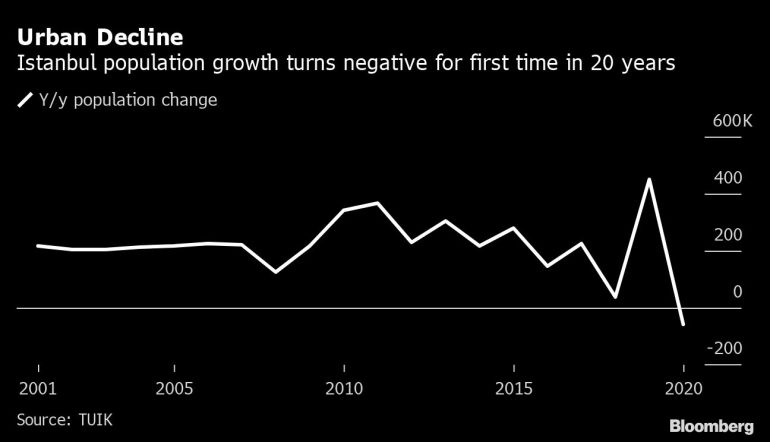 For decades, Turks from around the country of over 83 million have flocked to Istanbul seeking work and opportunities. But since the coronavirus hit, the government has implemented curfews to curb socializing and restricted opening hours for shops and restaurants, making young professionals reassess what they get for their money in big cities.

Surrounding provinces were the beneficiaries, with the population of Tekirdag to the west up 2.4% to 1.1 million and Kocaeli to the east up 2.3% to 2 million.

The pandemic also struck Istanbul’s tourism sector and universities with tens of thousands of seasonal workers and college students staying away for much of the last year.

“In the pandemic, the acceleration of digitalization, the spread of online working and the acceleration in the gig economy has sped up the movement of people from city centers to suburbs or other cities,” said Nilufer Narli, chair of the sociology department at Bahcesehir University. “This also applies to Istanbul.”

“This will turn into a permanent trend,” Narli predicted. “Companies have seen their costs decrease with online working. The way we do business is undergoing a significant change.”

–With assistance from Taylan Bilgic.