Billionaire Elon Musk threw $1.5bn into bitcoin before tweeting that its value does “seem high.” Microsoft founder Bill Gates, a centibillionaire himself, recently warned investors against losing their shirts with risky cryptocurrency, telling Bloomberg News he is not bullish on bitcoin, partly for environmental reasons. And United States Treasury Secretary Janet Yellen said that bitcoin is inefficient for actually carrying out transactions and is highly speculative.

Yet bitcoin is the hot topic that keeps popping up. But with so much of the US technological, financial and political elite sceptical about its utility as a medium of exchange and its ability to be a long-term store of value, many are wondering what the asset is truly worth. Here’s what you need to know.

Is bitcoin trying to dethrone the dollar?

Bitcoin fans say crypto is the future and one day a decentralised global financial system will dethrone investment titans, central banks and government treasuries. They predict a borderless currency that doesn’t rely on any of the old institutions will be the only way to do business.

But because that is all still aspirational, there’s no guarantee bitcoin can break through the current institutional barriers  — and push its value “to the moon” — crypto parlance for intergalactic success.

“It could go anywhere,” Peter Tchir, head of macro strategy at Academy Securities, told Al Jazeera. “But right now, I’m bearish. You’ll see significant pushback by regulators across the globe to corral what is going on.”

So is bitcoin worth nothing or on its way to half a million dollars?

Naysayers claim bitcoin is literally worth zilch, while enthusiasts say the value of one bitcoin is far higher than the approximately $50,000 the cryptocurrency has hovered at this week. At present, the market capitalisation of bitcoin is a bit shy of $1 trillion, making it the most valuable cryptocurrency by far.

JPMorgan Chase & Co analysts have said bitcoin’s value could rise to almost $150,000 over the next decade, while Mike Novogratz at Galaxy Digital has forecast a valuation of $500,000 by 2024.

Why does cryptocurrency tend to be such a speculative investment?

Some experts argue that the momentum investing of people piling onto bitcoin is a fad, making the asset more like a collectable, such as fine art. Others have likened it more to a fleeting trend, a flash-in-the-pan like the tulip mania of the 1630s or the Beanie Babies craze of the 1990s. Right now, bitcoin’s appeal relies both on flashy marketing and investor FOMO — the fear of missing out.

In this way, its value may never have any objective equilibrium point, and will instead always just be worth what buyers are willing to pay. Bitcoin derives value from its perceived scarcity and network effects. 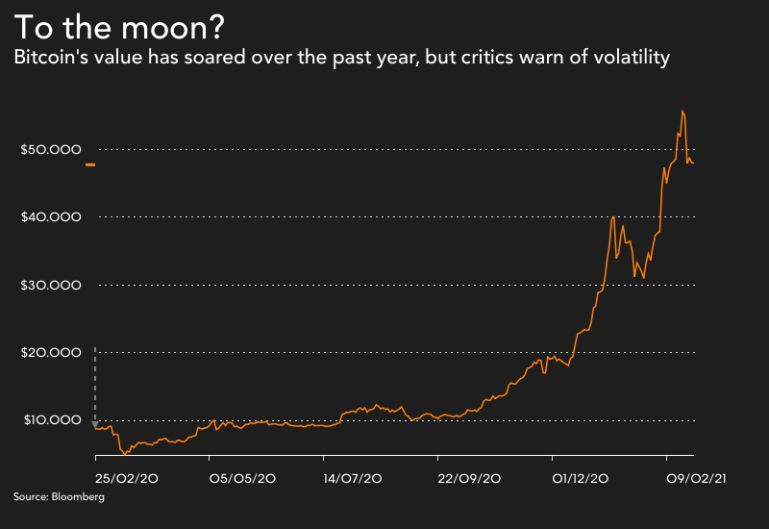 Why is blockchain technology important?

Blockchain lets users verify each other’s transactions for the simple purpose of making sure they don’t use the same cryptocurrency twice, kind of like floating a cheque. These peer-to-peer transactions are pseudonymous but not fully anonymous, meaning that everything can be traced in the public ledger.

After a widespread payment system outage at the US Federal Reserve disrupted wire transfers and cheque clearing services this week, many bitcoin supporters argued on social media that blockchain could prevent the kind of disruptions that hit the Fed.

Some critics who argue that bitcoin is too volatile still see potential for the blockchain system to be widely used. Meanwhile, bitcoin’s supporters see a global financial system sea change under way that is buttressed by all the functions of cryptocurrency.

Can you actually buy anything with bitcoin right now?

At the moment, acceptance is still limited. Amazon uses third-party service Purse to take bitcoin payments for e-commerce products. In 2014, Overstock became the first big online retailer to welcome bitcoin on its platform. And Tesla also announced it would soon accept bitcoin as payment for its electric vehicles.

In the cryptocurrency world, the old lines have blurred and do not fully distinguish currencies from securities and commodities.

“We’re moving to a world where value is inherently fluid,” Lewis Cohen, a crypto lawyer, said at the virtual Bloomberg Crypto Summit on Thursday. “In the past, there was a distinction between money and everything else. Now, it’s not so clear.”

What about the environmental cost?

The market’s appetite for bitcoin has prompted some doubters to double down on their criticisms about cryptocurrency being environmentally unfriendly.

Mining for cryptocurrency involves complex computer calculations to verify transactions, which requires massive amounts of electricity to power the computers as well as keep them cool. Bitcoin is estimated to use more than 127 terawatt-hours of electricity per year, according to modelling by the Centre for Alternative Finance at the University of Cambridge.

But bitcoin defenders say that the fiat currency system as a whole requires far more electricity to maintain — when adding up the power needs of banks and other institutions whose equipment and employees keep the dollar dominant. Cambridge University researchers acknowledge it is impossible to know how much electricity bitcoin uses for a variety of reasons, and more data is needed to determine its environmental impact as a whole, especially because some bitcoin miners used renewable energy sources to power their operations.

So should I run out and buy bitcoin?

Increasingly, financial advisors are telling their clients to invest a small fraction of their portfolios in “digital gold” — around two percent, for example — as a way to diversify risk and get a piece of the cryptocurrency action.

Nic Carter, cofounder of Coin Metrics, said that bitcoin’s value is based on it being “highly transferable and programmable”. Despite there being no physical use for it right now, it’s easily deliverable — not like hauling a suitcase full of gold bars to your bank.

Tchir of Academy Securities, who calls himself bitcoin agnostic, points out that of the people talking it up, “most are heavily incentivised. They own it … like a penny stock on steroids.”

It could go anywhere. But right now, I’m bearish. You’ll see significant pushback by regulators across the globe to corral what is going on.

Going back to that Fed outage, could buying bitcoin be a hedge against system failure?

Bitcoin could become more widely adopted as trust in the financial and political establishment continues to erode. Some people’s increasing lack of faith in conventional economics has driven them to invest in cryptocurrency as a global refuge against the possible collapse of certain industries or countries.

In turn, payment processing companies such as PayPal and Square have responded to the demand that customers have for bitcoin by announcing they will accept it as payment. And investment banks like Fidelity and Goldman Sachs are adding to their own exposure and also making it easier for clients to jump on the crypto bandwagon.

Is bitcoin going to make me rich?

Only time will tell. Although bitcoin’s bubble may soon be smoothed over by mainstream adoption, the future is unpredictable for the world’s dominant cryptocurrency. And its popularity could be proof of an irrational frenzy, or a real sign of its ever-increasing international prevalence — and value.

For those who were lucky enough to purchase one bitcoin last March at around $5,000, their investment has grown about tenfold over the past year. The same can’t be said for those Beanie Babies gathering dust in your basement.