GameStop Corp. shares extended their rally to a third day, putting them on pace for their best week this month amid a flurry of day trader activity.

The video-game retailer climbed as much as 20% to $130 in premarket trading as amateur investors continued to promote the stock on social media platforms like Reddit and StockTwits. More than a million shares have changed hands today, adding to the 233 million that traded over the past two sessions.

“It would be unwise to discount the power of the collective retail trade and this is an example of the resurgence of energy either on GME again or through another stock,” said Amy Kong, chief investment officer of Barrett Asset Management. 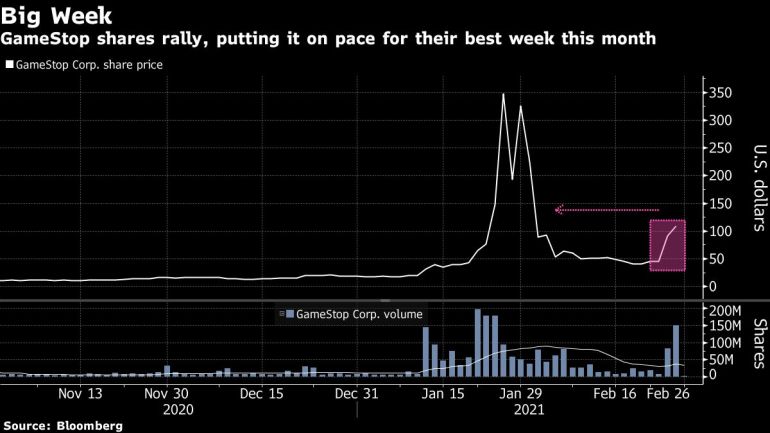 Options traders were betting that the stock could do much better Friday after more than doubling so far this week. The most-active option traded on the stock Thursday was a contract on GameStop spiking to $800 on Friday. Some 52,000 contracts changed hands during the session betting on this one-day gain of 636%. The stock was up 15% to $125.15 as of 7:22 a.m. in New York.

Analysts cited a tweet by activist investor and GameStop board member Ryan Cohen posted shortly before the stock began its resurgence on Wednesday, suggesting Reddit traders may view the photo of a McDonald’s Corp. ice cream as a cryptic message to resume buying. A report from Citron Research suggesting the company purchase Esports Entertainment Group Inc. to pivot away from its declining retail business provided a further catalyst.

“From a top down perspective, I would caution that these price spikes continue to signal frothiness in certain corners of the market and represent sharp deviations from company fundamentals,” Kong said.