By Michael Msika and Jake Lloyd-SmithBloomberg

The wild run-up of trades popular with Reddit crowds is starting to come crashing down.

The speculative activity hatched online has captivated global markets, drawing attention from U.S. politicians and overwhelming brokerages around the world. Now, the speculative tide is turning.

“The short squeeze momentum met its inevitable end,” said Mark Taylor, a sales trader at Mirabaud Securities. “It seems reasonably clear that as the cheerleading and rage against the machine dies down, the man on the street is left holding the bag again.”

In GameStop, short interest plunged to 53% of the available shares, from more than 140% just last month, according to data from financial analytics firm S3 Partners. Trading volume on Monday slowed to around one-third of the average of the past five sessions. 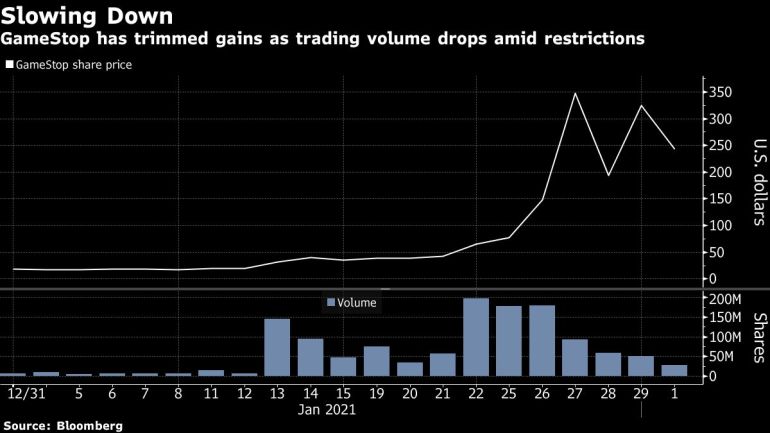 It’s anyone’s guess whether this marks an inflection point for the manic gains that have spread from one asset to the next in recent weeks. But the pullback lends credence to market watchers who’ve said it was only a matter of time before the rallies began to fade.

For now, the broader market seems largely immune to the intense volatility in GameStop, AMC and silver. Global equities rallied sharply into the U.S. morning on Tuesday, with the focus shifting to big tech earnings. S&P 500 futures were up 1% as of 5 a.m. in New York.

The easing of trading restrictions is likely playing some role in the recent market action. On Monday afternoon, Robinhood let users to purchase up to 20 GameStop shares, compared with one share before the market opened.

In silver, CME Group asked traders to put up more collateral after reviewing market volatility. The exchange raised margins on Comex silver futures by 18% to $16,500 per contract. That mood on Reddit boards also started to fizzle, with some users urging their fellow investors to back away from silver. 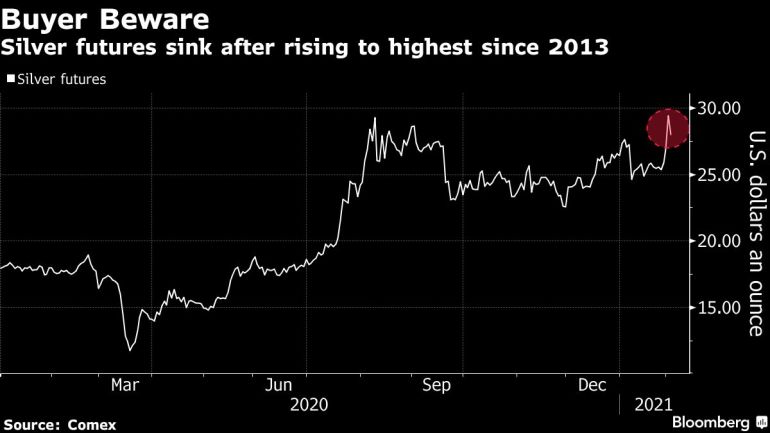 Silver’s retracement “isn’t surprising, as any longer-term price upside due to social media-driven collaboration and conspiracy theories was always going to be unsustainable,” said Gavin Wendt, a senior resource analyst at MineLife Pty.