The World Bank says it was gravely concerned about the current situation in Myanmar and the military takeover of power, warning the events risked a major setback to the country’s transition and its development prospects.

“We are concerned about the safety and security of people in Myanmar, including our staff and partners, and are troubled by the shutdown of communications channels both within Myanmar and with the outside world,” the Bank said in a statement issued late on Monday.

Myanmar’s army on Monday handed power to military chief General Min Aung Hlaing and imposed a year-long state of emergency, saying it had responded to what it called election fraud.

The move led to condemnation from Western leaders and a threat of renewed sanctions by the United States, and raised questions about the outlook for a million Rohingya refugees.

The World Bank said it had been a committed partner in supporting Myanmar’s transition to democracy for the past 10 years, as well as its efforts to achieve broad-based sustainable growth and increased social inclusion.

“We remain committed to these goals. Our thoughts are with the people of Myanmar,” the statement said.

It cited what it called measurable improvements in social welfare since the country’s opening in 2011, with poverty falling to 25 percent in 2017 from 48 percent in 2005.

Reform momentum slowed after 2016 as a newly elected civilian government grappled with defining its economic vision, the bank said, although it added that the government had recently adopted an ambitious sustainable development plan and reinvigorated its economic reform agenda.

Economic growth was slated to drop to just 0.5 percent in fiscal year 2019/2020 from 6.8 percent a year earlier, the bank said, although it said the economy could contract by as much as 2.5 percent if the COVID-19 pandemic is protracted.

Trade experts and analysts say the coup is likely to to dampen the interest of companies from the US and other Western countries in investing in the Southeast Asian nation.

Luggage maker Samsonite and privately owned apparel maker LL Bean are among the larger US importers which source from Myanmar, along with retailer H&M and Adidas, Panjiva said.

US imports increased in part due to tariffs on goods from China, but Myanmar still ranked only 84th on the list of American goods suppliers, according to US data.

The World Bank reported a 33-percent jump in total foreign direct investment commitments in Myanmar to $5.5bn in the fiscal year 2019-2020, led by Singapore and Hong Kong, but said the outlook was uncertain due to the pandemic and market developments. 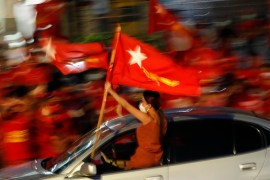 The comfortable win will be a boost for Aung San Suu Kyi. 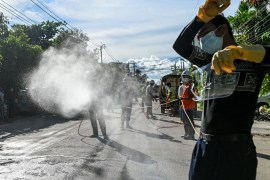 Area’s more than four million people given less than 24 hours to prepare for ‘stay at home’ order.