In a blow to the Reddit crowd taking on the Wall Street elite, the broader hedge fund industry lives to fight another day for now following a week of stock drama.

Even after the worst-ever short squeeze forced professional speculators to deleverage by the most in more than a decade, the smart money is staying invested in the U.S. stock rally with exposure near a record high, Goldman Sachs Group Inc. prime brokerage data show.

Stocks beloved by professional speculators are rebounding, while their most-shorted shares are no longer staging a costly rally. Quant funds — often accused of amplifying sell-offs — have been largely unscathed. Equity volatility is down again and other asset classes barely registered the commotion.

The bottom line? Last week’s deleveraging was drastic, but concentrated. Beyond the handful of smaller stocks roiled by the Reddit crowd, selling pressure has dissipated. 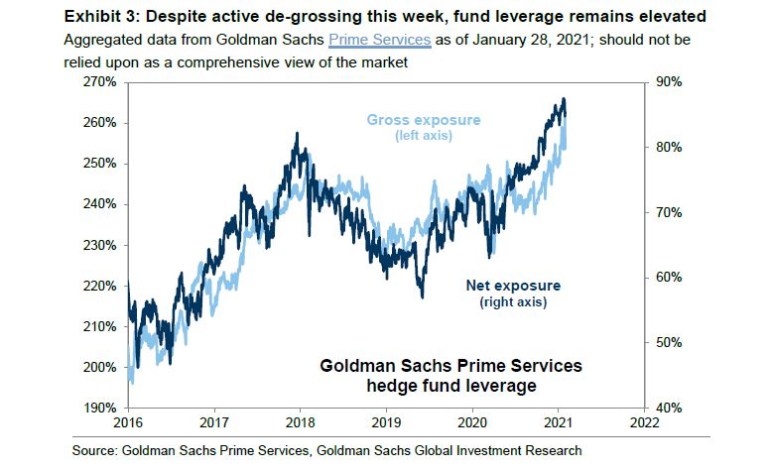 The Acadian team estimated that a fund holding the most popular long and shorts would have lost more than 30% last month — but the impact could be much less depending on a manager’s specific exposure. 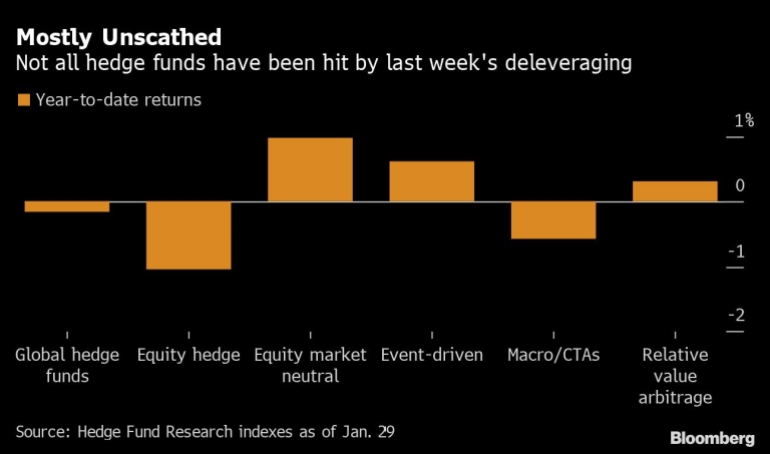 Since last week was near the end of January, hedge funds were probably even more keen to cut positions to flatter month-end risk metrics in a process known as “window dressing,” said Nicolas Roth, head of alternative assets at private bank Reyl & Cie. Deleveraging appears to be over now, he added.

In a sign that computer-powered funds didn’t contribute to the swings last week, Acadian pointed out that the cheapest and priciest stocks — hence those that are most affected by the popular value factor — only saw a regular amount of trading during the period.

Among quants that trade index futures rather than single stocks, risk-parity funds and Commodity Trading Advisors haven’t been cutting risk sharply, according to Masanari Takada, a strategist at Nomura Holdings Inc.

Risk parity typically reduces exposure when volatility rises, while CTAs follow strong trends both up or down.

“What we are seeing now does not look like a classic beta-driven correction, in which deleveraging is the leading cause of market-wide selling,” Takada wrote in a note, using the Greek symbol that denotes top-down equity risk. “The risk-off this time comes by way of the diversifiable, specific risks associated with holding particular stocks.”

Much of this is down to the idiosyncratic nature of the Reddit investment phenomenon, which is the key difference between this deleveraging episode and others spurred by economic anxieties or macro shocks such as the pandemic. While the retail crowd can whip up a trading frenzy in a few stocks through its message board, the targets tend to be concentrated and relatively small.

Over the past five days, trading volumes trebled for 59 members of the Russell 3000 Index compared to their six-month average. But about a third of the gauge’s members actually record lower-than-average activity. Over the past 10 days, volatility doubled for 46 members compared to the one-year average. Roughly 2,400 posted smaller swings. 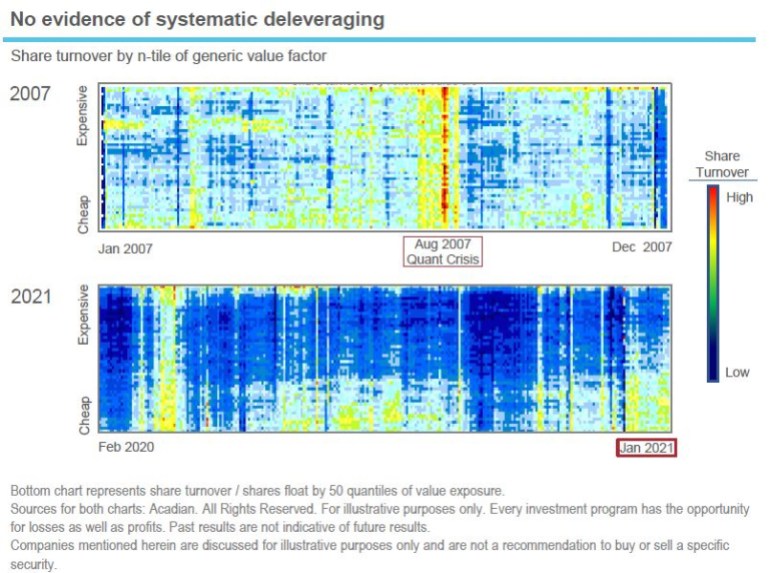 “Like many systematic players, we are quite insulated from the headline-moving names,” said Edward Gladwyn, who manages a quant portfolio at Unigestion SA. “Their liquidity profile was not very attractive.”

Yet the Robinhood crew clearly made a big dent among a specific breed of smart money investor. Infamously, Melvin Capital received billions in support from Citadel and Point72 Asset Management after its bearish bets were blown up. As Gladwyn notes, “there is no question that there is some contagion into the wider long-short space.”

Most fund managers may see good reason to avoid making an enemy out of the new horde of day traders. Wolfe Research has recommended that professional stock pickers avoid both betting on and against Reddit favorites.

For the more opportunistic stock pickers, there may be room to pick up some hedge-fund darlings that have only dropped because of technical selling pressure, according to Goldman Sachs strategists. With stock correlations falling near the lowest since September 2019, this might even be a better time for the pros to prove their skill, especially as a recovering economy supports stocks.

“If growth remains the key driver of stock prices, investors have reason for optimism,” a team led by David Kostin wrote.