The Riyadh-based Public Investment Fund acquired more than $3 billion worth of stock in three U.S. video-game makers during the fourth quarter, according to a regulatory filing. They include Activision Blizzard Inc., Electronic Arts Inc. and Take-Two Interactive Software Inc.

The sovereign wealth fund, also known as PIF, is chaired by Prince Mohammed, who told Bloomberg Businessweek in 2016 that he was part of the first Saudi generation to grow up playing video games. The crown prince credited video games with sparking ingenuity in the Bloomberg Businessweek profile, while telling the New Yorker in 2018 that his favorite diversion is Call of Duty series, Activision’s best-selling franchise.

In November, a subsidiary of the crown prince’s charitable organization — the Mohamed bin Salman Foundation — said it purchased a one-third stake in SNK Corp., the Japanese developer of King of Fighters and Samurai Shodown. The charity, also known as the MiSK Foundation, said it would increase its stake to 51% in the future.

The sovereign wealth fund acquired 14.9 million Activision shares with a market value of almost $1.4 billion during the fourth quarter, according to a Form 13F filed with the U.S. Securities and Exchange Commission. Its other purchases included 7.4 million Electronic Arts shares and 3.9 million Take-Two shares worth about $1.1 billion and $826 million, respectively, at the end of December.

Shares of all three game-makers have gained since the third quarter ended, with Activision jumping some 27%, thanks in part to an upbeat earnings report earlier this month. Electronic Arts is up almost 12% and Take-Two has climbed about 18% since Sept. 30, roughly equal to the 17.7% total return for the benchmark S&P 500 index.

The PIF is a key part of the crown prince’s plan to diversify the Saudi economy from its dependence on oil. The fund has made several high-profile investments in recent years, including a $4.4 billion stake in Uber Technologies Inc. and big commitments to Softbank Group Corp.’s Vision Fund. 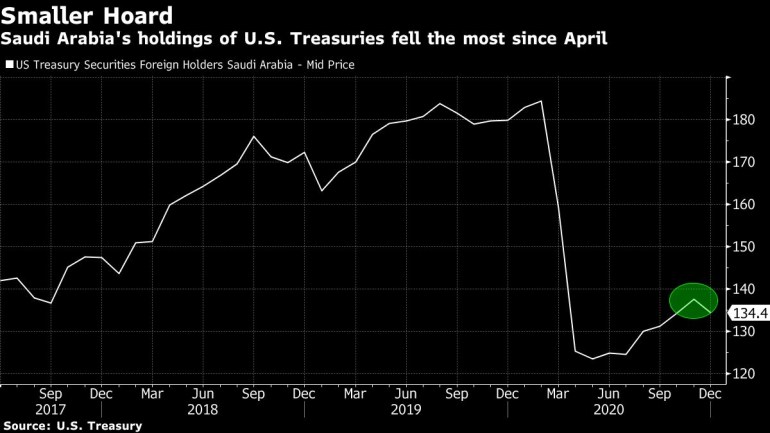 The big bets on gaming were the latest sign of how the crown prince and Yasir Al Rumayyan, the governor of the sovereign fund, are leading an aggressive shift in how the kingdom invests its wealth.

In the past, excess oil revenue was invested by the Saudi central bank, mostly in stable liquid assets like U.S. Treasuries. The kingdom missed an opportunity to buy cheap stocks during the 2008 global financial crisis, Al Rumayyan said in December.

But it was ready to take advantage of a slump in markets early last year as the coronavirus pandemic sent equities into a tailspin.

The PIF received a $40 billion transfer from the nation’s reserves in March to fund a flurry of activity that saw the fund buy stakes in companies including Citigroup Inc., Facebook Inc. and cruise-ship operator Carnival Corp. By the end of June it had sold most of those stakes.

As the kingdom was boosting its exposure to U.S. equities held by the PIF in the last few months of 2020, its holdings of U.S. Treasures fell the most since April.

By contrast, its exposure to U.S. equities in the third quarter fell by $3 billion, mainly because the PIF sold stakes in exchange-traded funds that track the real estate and materials sectors.

The fund’s foreign holdings as a portion of total assets are expected to fall over the next few years as it commits to spending at least $40 billion a year at home.

The sovereign investor’s role will increasingly be to develop huge new projects around the country focused on building up new industries and diversifying the economy.