Asian shares advanced on Tuesday, putting world equities on course to extend their bull run for a 12th consecutive session as optimism about the global economic recovery and expectations of continuing low-interest rates drive investments into riskier assets.

Oil prices soared to a 13-month high as a deep freeze due to a severe snow storm in the United States not only boosted power demand but also threatened oil production in Texas.

MSCI’s broadest index of Asia-Pacific shares outside Japan ticked up 0.45 percent while Japan’s Nikkei rose 0.4 percent to a 30-year high.

Mainland Chinese markets will remain closed for the holidays until Thursday while Wall Street was also shut on Monday.

John Milroy, an adviser at Australian investment firm Ord Minnett, said that although share markets are rising, investors are becoming wary of the future risk of inflation due to central bank and government stimulus programmes in place around the world.

“Gaining traction is the thought that inflation could rise much faster and sooner than the [US Federal Reserve] is currently thinking. Then if they do raise rates to combat it, what happens to equity markets and of course bond markets?”

The bullish view on the economy lifted bond yields, with 10-year US Treasuries gaining five basis points to 1.245 percent in early Asian trade, its highest since late March 2020.

Investors are looking ahead to the release on Wednesday of the minutes of the Federal Reserve’s January meeting for confirmation of its commitment to maintaining its dovish policy stance over the near future. That, in turn, could continue to push bond yields higher as investors shun fixed-income assets in favour of riskier ones such as stocks.

But some analysts say investors should keep a wary eye on bond yields.

Stock index futures for the US’s S&P500 traded 0.65 percent higher to a record and MSCI’s all-country world index (ACWI), which has risen every single day so far this month, also ticked up slightly.

The successful roll-outs of COVID-19 vaccines in many countries are raising hopes of further recovery in economic activities hampered by the range of anti-virus curbs.

US President Joe Biden is pushing ahead with his plan to pump an extra $1.9 trillion in stimulus measures into the economy, in a further boost to market sentiment.

Oil prices soared to their highest in about 13 months as a US winter storm added to hopes of a further recovery in demand. 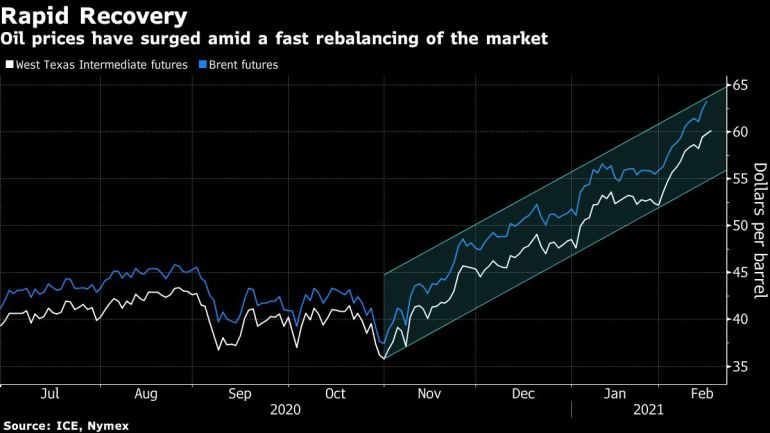 US oil production has dropped by anywhere from 1.5 million to 1.7 million barrels a day, helping US crude prices trade above $60 a barrel for the first time in more than a year. The region’s refining complex – which produces almost half of the US’s fuel – is struggling to limp along without power. Some of the largest oil refineries have shut altogether, threatening to reduce supplies of gasoline and diesel across the country.

Prices have rallied in recent weeks because of tightening supplies, largely due to production cuts from the Organization of the Petroleum Exporting Countries (OPEC) and its allied producers.

Rising oil prices supported commodity-linked currencies such as the Canadian dollar while safe-haven currencies including the US dollar took a back seat.