Louisville, Kentucky, the United States — Cheri Nicholson got teary-eyed. She could only think about where she and her husband, who lives with a disability, would go.

It was January 27. Nicholson, 64, had logged on to Zoom for her eviction hearing, but she’d been given the wrong access number. Though she phoned the district court clerk’s office and got the right number, it was too late. The judge had ruled. She had seven days to leave her Louisville, Kentucky house.

“The only thing you can think is you’re going to be one of those people who have to live under a bridge,” Nicholson told Al Jazeera.

Finding a new place during a pandemic would be hard. A hip surgery last year left Nicholson without work. She tried to explain what happened, but the judge only directed her to the Legal Aid Society.

Nicholson is among the hundreds of thousands of Americans who received eviction notices during the coronavirus pandemic, despite a federal moratorium that blocks residential evictions for non-payment of rent.

While activists say the federal ban and state and local protections, as well as current and proposed rental assistance, are important, they don’t go far enough. Meanwhile, landlords say they’re also struggling without rent money coming in. And most agree the pandemic has deepened the country’s housing crisis, underscoring the need for meaningful housing reform.

The current Centers for Disease Control and Prevention (CDC) moratorium is set to expire at the end of March, and President Joe Biden has proposed extending it until September.

But the protections are not automatic, and housing activists say there are loopholes for landlords to use.

Landlords have filed for more than 245,900 evictions across the five states and 27 cities tracked by Princeton University’s Eviction Lab during the pandemic. This doesn’t include Kentucky, where lawyers estimate courts hear hundreds of eviction cases a week.

Tenants must meet a set of criteria and present a signed, printed COVID-19 hardship declaration to their landlords. Housing advocates say many renters do not know about the moratorium or its requirements until they get to their eviction hearings — and that’s only if a judge or housing advocates inform them.

“I didn’t know a stinking thing about CDC forms” until being told about them after her hearing, Nicholson said.

Further, the moratorium requires tenants to use their “best efforts” to access rental assistance programmes.

The latest stimulus package passed in December allocated $25bn in rental relief. That money only started to roll out to states and local jurisdictions, which manage their own programmes for distribution, in late January.

Portions of Biden’s $1.9 trillion COVID-19 relief package are currently making their way through congressional committees, which includes $30bn in rental and utility assistance, as well as $1,400 stimulus cheques for qualifying Americans. House Speaker Nancy Pelosi has said Democrats hope to pass the legislation within weeks.

While housing advocates and experts welcome the proposed additional funding, as well as the direct cash payments already paid to millions of Americans, they say it’s simply not enough and won’t arrive in time to alleviate the burden renters are already facing.

We should not be living like this in America, where people are scared to death they're gonna lose their home. I feel like this country's got to reassess.

More than 10 million people were behind on rent as of late December, according to an analysis (PDF) by Moody’s Analytics and the Urban Institute. Altogether, renters behind on rent owed more than $57bn at the end of last year.

Even when assistance is available, the web that renters navigate to access the funds is often stressful and burdensome. It also can take months to get approved, and that’s only if the money doesn’t run out first.

Shaye Awwad, a renter living just outside Lexington, Kentucky, said she has had to jump through hoops to access rental assistance. Her landlord brought her to eviction court in September, but she signed the CDC declaration and has since been protected.

Awwad, who has been without work due to the pandemic, spent more than half an hour detailing the steps she had to take to access rental assistance from the government and local organisations.

Worse still, Moody’s and the Urban Institute found that those “who have fallen behind in their rent are among the most vulnerable members of society”. They are more likely to have no work, less income and less education. They’re also more likely to be families of colour — from communities already disproportionately affected by the pandemic.

Even before the pandemic, more than half of Black and Hispanic renters were cost-burdened, spending more than 30 percent of their income on housing, according to Harvard University’s Joint Center for Housing Studies. The pandemic has only made these disparities worse, JCHS found.

Meanwhile, landlords, especially those not affiliated with large corporations, say they feel pinched by the pandemic and eviction moratorium as well.

Landlords still have expenses — property taxes, maintenance costs, mortgage payments and other bills — even when rent is not coming in.

Additionally, nearly 31 percent of landlords surveyed in October said they felt more financial pressure to sell their properties during the pandemic than before the health crisis, with a reduction of rental income as the driving factor, the Urban Institute and Avail found.

Lexington landlord Robert Hodge has received some relief through rental assistance programmes accessed by some of his tenants, but he says he’s still losing thousands of dollars a month.

According to Hodge, several of his tenants haven’t tried to get the assistance, and have packed up and left his properties, owing thousands and leaving him largely without any recourse.

Hodge, who has several properties in Lexington’s low-income areas, fears he may eventually have to raise the rent as property values continue to increase.

Having grown up in the area, he wants to keep housing affordable for his community. “I don’t want to raise rent,” he told Al Jazeera. “But I’m getting to the point where it’s gonna come down to where I’m gonna have to raise rents to compensate for some of this money that I’ve lost.”

I don’t want to go back to normal. Normal was actually deeply inequitable.

A ‘bold, federal response to the housing crisis’

Housing rights activists, tenants and others share that fear.

Beau Revlett sighed deeply as he recounted the stories of tenants he has talked to as an organiser with the Lexington Housing Justice Collective (LHJC), which assists renters, monitors eviction proceedings and advocates for stronger protections.

“We’re massively concerned about the immediate material impact of people losing their homes over the course of these next few months,” Revlett told Al Jazeera.

But “long term, we’re also really concerned about a lot of homes going into foreclosure and major corporations and investment firms having the money specifically to buy those homes, just like they did after the 2008 crash,” he added.

“I’m worried once everyone gets vaccinated … people are going to be like, ‘Okay, let’s get back to normal,’” said Ross, who is the founder and principal of Spirit for Change Consulting, a firm that works to advance equity in regions, cities and neighbourhoods.

“I don’t want to go back to normal,” she said. “Normal was actually deeply inequitable.”

Instead, Ross sees opportunity in how the US comes out of the pandemic, especially when it comes to housing.

Ross is a senior fellow for the Housing Playbook Project at Community Change, which has put together a comprehensive list of recommendations to encourage a “bold federal response to the housing crisis”.

Those recommendations include everything from expanding the federal voucher housing programme, to creating a refundable renter’s tax credit, to establishing a presidential commission on reparations for Black people.

‘This country’s got to reassess’

Housing advocates, meanwhile, are also focused on pressing their local governments to take stronger action, including cancelling rent for tenants and mortgage payments for landlords and other homeowners. The current federal moratorium only freezes rent payments rather than cancelling them, so tenants will still be responsible for months of back payments when it expires.

Many worry about a looming wave of mass evictions that will hit when federal and/or local moratoriums expire.

“The pandemic has highlighted a housing crisis that already existed for so many people [especially communities of colour],” said LHJC’s Revlett.

The fact that evictions are still taking place in a pandemic, and corporate investors are poised to sweep up low-income housing “make it more difficult for our communities to survive,” he added, noting that these “are the kinds of things that just re-emphasise the need for real fundamental change in the housing system that goes beyond COVID relief.”

For tenants, many are taking it day by day, hoping they’ll get the relief they need to keep a roof over their heads. Some are doubling up, despite the fear of COVID-19. And still, others are forced to look for new housing options after being evicted.

Back in Louisville, Nicholson’s eviction judgement has been set aside until at least March 2, when her case will be reviewed. “I feel safer” at least for now, said Nicholson, who is working on getting rental assistance.

She’s also part of a lawsuit that seeks to ensure everyone has the correct information for accessing their online hearings.

“We should not be living like this in America, where people are scared to death they’re gonna lose their home,” she said. “I feel like this country’s got to reassess. It’s a pandemic, for God’s sake.” 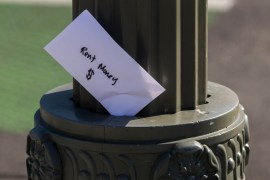 Advocates worry that overturning these bans could cause homelessness to spike and force people into crowded shelters. 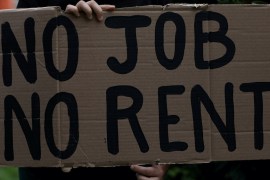 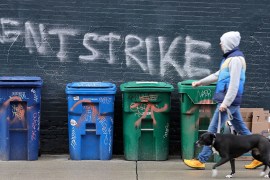 US renters live under eviction threat despite gov’t ‘protections’

Housing advocates, renters say eviction notices are still going out despite coronavirus lockdowns and some moratoriums. 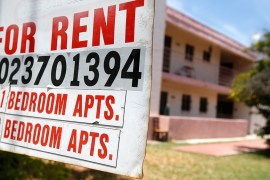