Bitcoin blew through another milestone, surging past $50,000 for the first time as the blistering rally in the largest cryptocurrency continues to captivate investors worldwide.

After ending last year with a fourth-quarter surge of 170% to around $29,000, Bitcoin token jumped to $40,000 seven days later. It took just nearly six weeks to breach the latest threshold, buoyed by endorsements from the likes of Paul Tudor Jones, Stan Druckenmiller and Elon Musk. Bitcoin traded for a few cents for several years after its debut more than a decade ago. 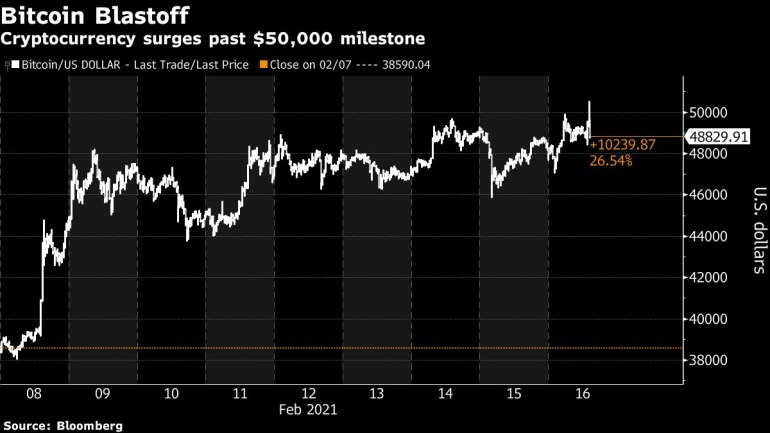 Tesla Inc.’s announcement that it added $1.5 billion in Bitcoin to its balance sheet was the most visible recent catalyst, sending the price up 16% on Feb. 8, the biggest one-day gain since the Covid-19 inspired financial markets volatility in March. Optimism grew after Mastercard Inc. and Bank of New York Mellon Corp. moved to make it easier for customers to use cryptocurrencies, while Bloomberg reported Saturday that Morgan Stanley may add Bitcoin to its list of possible bets.

“Whether it’s Musk, Mastercard or Morgan Stanley, the mood, music and momentum is impossible to ignore,” said Antoni Trenchev, managing partner and co-founder of Nexo in London, one of the biggest crypto lenders. “To the annoyance of many, the Bitcoin express has left the station.”

The 400% rally over the past year comes amid a backdrop of near zero borrowing rates from central banks and unprecedented stimulus from governments in the wake of the coronavirus pandemic. Bitcoin advocates have criticized the moves as money printing even though inflation remains subdued.

Mastercard, in a blog post last week, singled out so-called “stablecoins,” which often peg their value to that of another asset, such as the U.S. dollar. Mastercard has already partnered with crypto card providers such as Wirex and BitPay, but has required digital currencies to be converted into fiat before processing payments for transactions on its network.

Trenchev cautioned that investors should be prepared for a wild ride after the latest milestone, pointing to last month’s 30% pullback as evidence.

“Short-term volatility is very much a feature of this bull market and investors should prepare accordingly,” he said.