Nigeria’s Ngozi Okonjo-Iweala was appointed Monday to head the leading international trade body as it seeks to resolve disagreements over how it decides cases involving billions in sales and thousands of jobs.

Okonjo-Iweala, 66, was appointed director-general of the World Trade Organization by representatives of the 164 member countries, according to a statement from the body.

She said in a statement that her first priority would be to quickly address the economic and health consequences of the COVID-19 pandemic and to “implement the policy responses we need to get the global economy going again.”

“Our organization faces a great many challenges but working together we can collectively make the WTO stronger, more agile and better adapted to the realities of today,” she said.

The appointment came after new United States President Joe Biden endorsed her candidacy, which had been blocked by former President Donald Trump.

On Monday, the US delegate to the WTO said he was “eager” to work with Okonjo-Iweala.

“The United States is committed to working closely with Director General Okonjo-Iweala and she can count on the United States to be a constructive partner,” said Charge d’Affaires David Bisbee in remarks sent to Reuters news agency by the US diplomatic mission in Geneva.

But unblocking Okonjo-Iweala’s appointment is only the start in dealing with trade disputes launched by Trump, and in resolving US concerns about the WTO that date to the administration of former President Barack Obama. The US had blocked the appointment of new judges to the WTO’s appellate body, essentially freezing its ability to resolve extended and complex trade disputes.

The US government has argued that the trade organisation is slow-moving and bureaucratic, ill-equipped to handle the problems posed by China’s state-dominated economy and unduly restrictive on US attempts to impose sanctions on countries that unfairly subsidise their companies or export at unusually low prices.

Earlier this month, the Biden administration reversed Trump’s opposition and expressed “strong support’’ for Okonjo-Iweala and said she “brings a wealth of knowledge in economics and international diplomacy”. She is the first African official and the first woman to hold the job.

Okonjo-Iweala, formerly Nigeria’s finance minister, had a 25-year career at the World Bank, where she rose to the number-two position of managing director. She holds both US and Nigerian citizenship.

South Korean trade minister Yoo Myung-hee had withdrawn her candidacy, leaving Okonjo-Iweala as the only choice. Her predecessor, Roberto Azevedo, stepped down on August 31, a year before his term expired.

Trump repeatedly accused the WTO of unfair treatment of the US, started a trade war with China in defiance of the WTO system, and threatened to pull the US out of the trade body altogether. Trump also imposed 25 percent steel tariffs that hit European allies on national security grounds, a justification that went beyond trade measures normally used within the WTO rules framework to address complaints about unfair trade.

So far, Biden has not said whether the US will unblock the appellate appointments, and he has not withdrawn the steel tariffs, which are backed by US steel industry and union groups.

The World Trade Organization is an international body that deals with the rules of trade between nations. At its heart are the WTO agreements, negotiated among the bulk of the world’s nations and ratified in their legislatures. 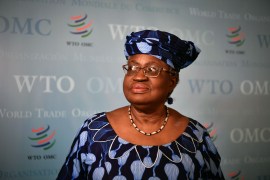 The incoming head of the World Trade Organization is known for shaking things up and holding power to account. 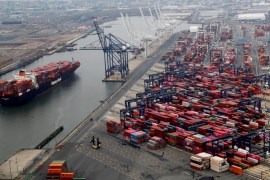 ‘These numbers are ugly,’ WTO warns of coronavirus’ hit to trade

Trade could fall this year by as much as 32 percent, WTO says, urging nations to keep markets open and predictable. 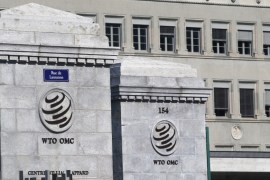 Three African candidates, two from Europe, two from Asia and one from the Americas compete for WTO’s top job. 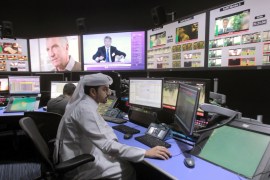