Japan’s Nikkei climbed 1.1 percent, touching the 30,000 mark for the first time since 1990, despite data showing the country’s recovery from its worst post-war recession slowed in the fourth quarter.

Australia’s benchmark index added 0.9 percent while E-mini futures for the S&P 500 were up 0.3 percent in early Asian trading.

Oil prices climbed to the highest since January 2020 on hopes US stimulus packages will boost the economy and fuel demand and on fears that cold weather in Texas may disrupt flows from America’s largest shale patch. The Arctic blast gripping parts of the US is threatening to crimp supplies from one of the world’s top producers just as crude, commodities and equity markets are getting a boost from vaccine and stimulus-driven optimism.

Prices were also buoyant after a Saudi-led coalition fighting in Yemen said it intercepted an explosive-laden drone fired by the Iran-aligned Houthi group, raising fears of fresh Middle East tensions. 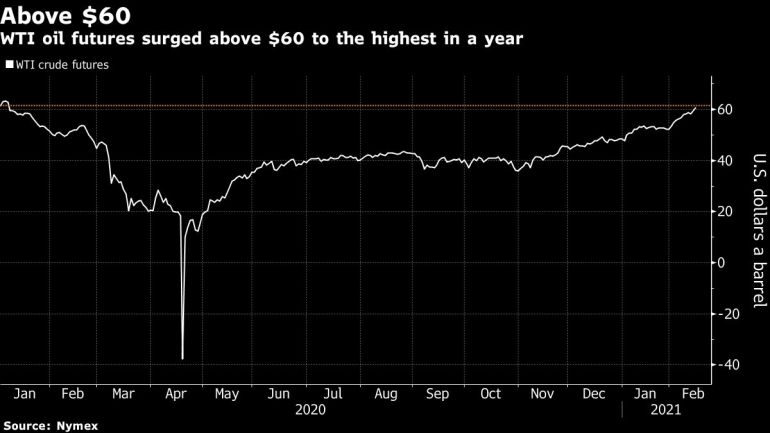 China and Hong Kong markets are shut for the Lunar New Year holiday. US stock markets will be closed on Monday for the Presidents’ Day holiday.

The highlight of the week will probably be the minutes of the US Federal Reserve’s January meeting, where policymakers decided to leave rates unchanged.

Data on inflation is due from the UK, Canada and Japan while Friday will see key economies including the United States release the preliminary February purchasing managers’ indices (PMI).

While economists expect inflation to stay benign for some while yet, the so-called “reflation trade” has gathered steam in recent days largely led by coronavirus vaccines and hopes of enormous fiscal spending under US President Joe Biden.

Biden pushed for the first big legislative achievement of his term, turning to a bipartisan group of local officials for help on his $1.9 trillion coronavirus relief plan.

“In our view, as long as the rise (in inflation) is gradual, equity markets can continue to do well. However, unruly moves would certainly hurt investor sentiment,” said Esty Dwek, the head of global market strategy, Natixis Investment Managers Solutions.

“Credit spreads have tightened sharply already, but they still have room to absorb some higher yields, making us more comfortable with credit risk than interest rate risk,” Dwek added.

“Commodities would be beneficiaries of an inflationary cycle, but they can still continue to recover without high core inflation as economies reopen and demand picks up.” 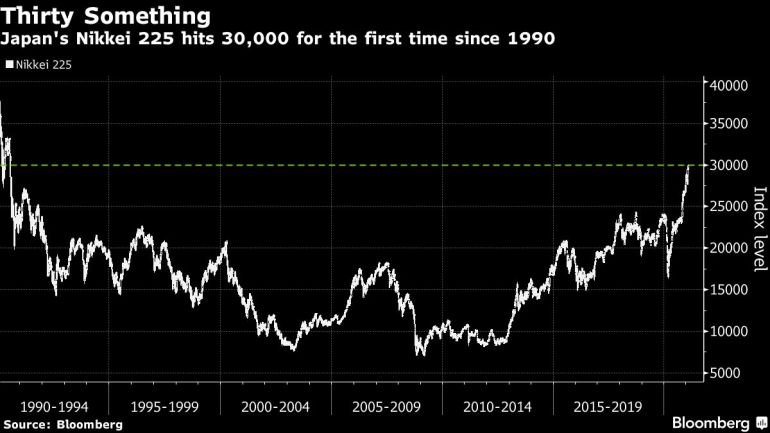 Market action in currencies was muted.

The dollar was slightly higher against the Japanese yen at 105.01 while the euro rose to $1.2125 and the British pound was up 0.3 percent at $1.3886. The risk-sensitive Australian and New Zealand dollars climbed 0.1 percent each.

That left the dollar index – a gauge of the US currency against commonly traded peers – steady at 90.426.

Bitcoin was barely changed in early Asian trading at $47,994, below a record high of $49,714.66. It posted gains of roughly 20 percent in a milestone week marked by the endorsement of top firms such as Elon Musk’s US electric carmaker Tesla.