Bitcoin may be the most popular cryptocurrency. But crypto investors would be wise to keep an eye on Ether, which dramatically outperformed its more volatile cousin in 2021 — a trend that could continue in 2022.

Today’s Chart of the Day shows Bitcoin against the dollar on a logarithmic scale over the past five years, measuring the acceleration of the cryptocurrency’s move while accounting for its volatility. After peaking in late 2017, Bitcoin has largely traded sideways. 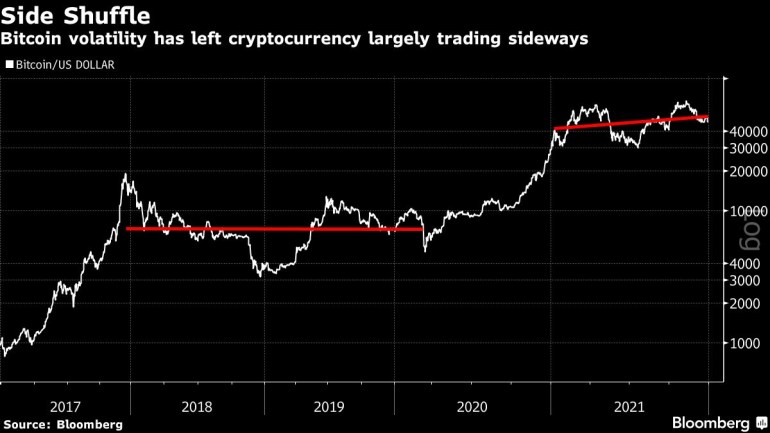 Volatility tied to the presidential election gave it a boost, which then sped up as traders embraced risk after the first Covid vaccine arrived in early November 2020. For a while, Bitcoin showed a positive correlation the S&P 500 Index, emerging-market securities and even commodities as a measure of inflation. But then, after putting up a 516% return in about six months, its momentum plateaued.

These days, the cryptocurrency seeing fewer wild swings. Tuesday’s thin volume, for example, traditionally would have triggered a major move, but Bitcoin dropped just 6.7%, or less than two standard deviations. In the first half of the year, the cryptocurrency crossed that threshold more than three times as often as it did in the second half, mainly thanks to retail-driven trades and regulatory risk.

“A lot of traders have made life-changing money in 2021 and have been waiting to take profits until after the turn of the year to delay tax payments until 2023,” said Sergio Silva, sales director at Fireblocks. “That’s another source of selling pressure that could cascade into additional weakness in January.”

At this point, Bitcoin’s price action appears to be driven more by technicals. The 200-day moving average, for example, has provided support in December.

The more notable gains, this year, however, have been in Ether, the token of the Ethereum network. It’s benefiting from the adoption of blockchain technology by financial technology companies, and perhaps more notably the popularity of non-fungible tokens (NFTs) in the art and gaming worlds. Measuring Ether’s outperformance over Bitcoin while taking volatility into account, shows its value has risen to levels last seen in the summer of 2018. 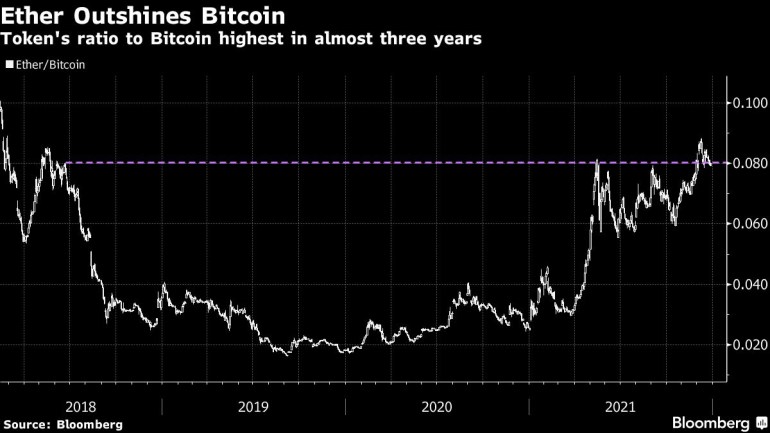 “It’s not really that clear to the world at large, to the mainstream, that what’s really happening with Bitcoin, with Ethereum, with this whole bucket of technologies…is really a revolution in software development,” Coinlist CEO Graham Jenkin said in a Bloomberg TV interview. “Blockchain technology represents a totally new way to build, distribute and run software.”