Canada’s economy was humming in the final weeks of 2021 at about pre-pandemic levels, before the country was hit by a wave of Covid-19 cases and fresh lockdowns.

Gross domestic product rose by 0.3% last month, extending the streak of monthly gains to six, according to a preliminary estimate from Statistics Canada published Thursday. In October, the economy expanded by 0.8%, the agency said. 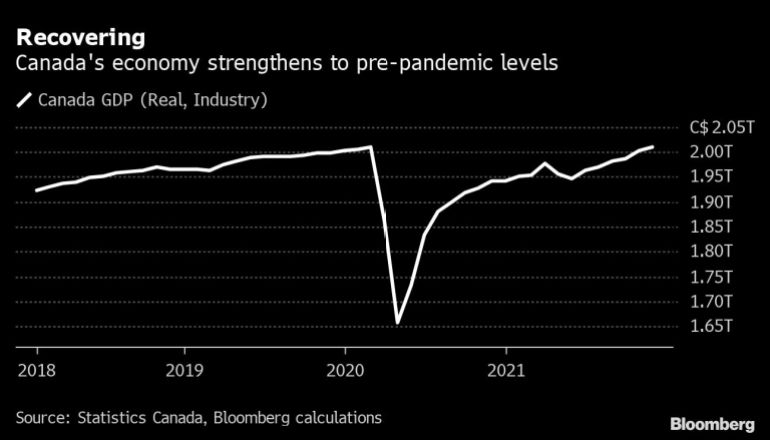 The gains brought GDP back to about where it was before the crisis hit, amid a strong second-half rebound that came after authorities lifted most Covid restrictions. Some of those restrictions are returning because of the fast-spreading omicron variant.

“Overall, these figures are stale in that they speak to conditions before uncertainties related to omicron,” Derek Holt, an economist with Bank of Nova Scotia, said by email.

According to Bloomberg calculations, output in November hit levels just shy of where it was in February 2020, before the start of the pandemic. Growth is on track to reach nearly 6% annualized in the fourth quarter, similar to the strong levels recorded in the third quarter.

Economic activity has lagged gains in the job market in Canada, with employment levels blowing past pre-pandemic levels.

The mounting evidence that a full recovery is near will only reinforce investor views that the Bank of Canada is about to begin a series of interest rate increases. Markets are pricing in five hikes next year.

To be sure, the emergence of the omicron variant and recent floods in British Columbia have increased risks to the outlook. The nation has seen an exponential rise in Covid-19 cases in recent days, with testing labs in some places becoming jammed with patients. Provinces including Quebec, Ontario and British Columbia have introduced new capacity restrictions on gyms, bars, event venues and other businesses in recent days.

But the data also suggest that households — who activity led growth in the third quarter — appear to have plenty of financial power to continue spending. Retail sales increased 1% in October, with arts and entertainment sectors gaining 7.1% during the month. Accommodation and food services were also among leading industries in November, the statistics agency said.

New “restrictions –- which will ultimately be temporary -– may not delay the Bank’s tightening plans,” Stephen Brown, an economist at Capital Economics, wrote in a note to clients.

The economy is also benefiting from easing supply chain problems. The manufacturing sector rebounded in October, the data show, notably in auto production, which had been held back by microchip shortages. Both residential and non-residential building construction expanded in October.