The shares soared on Monday after the regulator’s ruling on Friday that the US e-commerce giant suppressed information while seeking regulatory approval two years ago for its $200m investment in Future Group, India’s No 2 retailer.

Amazon has for months successfully used the terms of that deal to block Future’s attempts to sell retail assets for $3.4bn to a unit of Reliance Industries Ltd, Amazon’s biggest rival in the Indian retail space.

The Competition Commission of India (CCI) said Amazon will be given time to submit the information again to seek approvals, but a person with direct knowledge of the matter told the Reuters news agency that Future was unlikely to cooperate with Amazon if it tries to reapply for antitrust clearance. 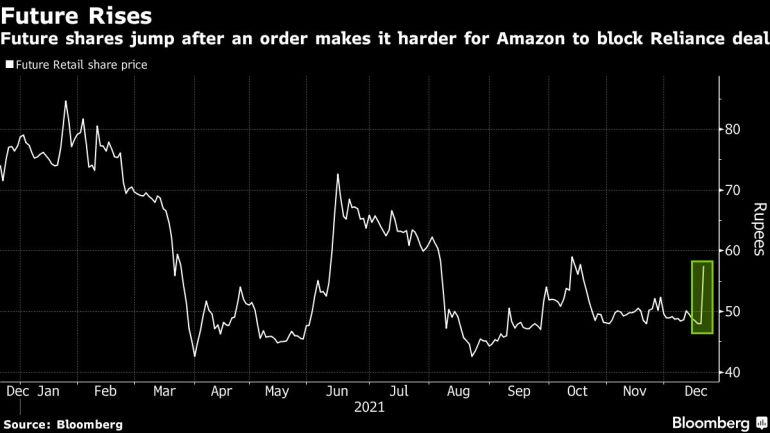 Amazon, Reliance and Future did not immediately respond to Reuters requests for comment on Monday. Amazon had said on Friday it was reviewing the order “and will decide on its next steps in due course.”

Amazon is likely to challenge the ruling in the coming days, people familiar with the matter said.

“Investors in Future have a morale booster now. With CCI getting into the matter, there is a strong indication that Future’s deal with Reliance may go through with fewer troubles, even though some challenges may be brought forward,” said Gaurav Garg, the head of research at CapitalVia Global Research.

Saloni Nangia, the president of retail consultancy Technopak told Al Jazeera that the move is not likely to affect foreign investor interest in India’s retail sector. “There is a lot of interest in the Indian market consumption story which will continue,” she said adding, “These are based on the core fundamentals of the Indian economy and market and we do not see this changing for some time to come.”

Future Retail shares had surged after its Reliance deal was announced in August last year, but have lost around a third of their value as Amazon mounted challenges.