Turkey halted trades on all listed stocks after sharp declines triggered a market-wide circuit breaker, with the lira extending declines to a record low.

Trading of equities, equity derivatives and debt repo transactions were automatically halted twice within an hour after the Borsa Istanbul 100 index fell as much as 7%. The trading resumed at 5:24 p.m. local time and the index was down as much as 9.1% within the first two minutes of operation.

The index was earlier up as much as 5.6% before sinking as a central bank intervention in the currency market failed to stem the lira’s decline. The currency has come under pressure after the central bank cut its benchmark repo rate by a percentage point to 14% on Thursday, despite inflation accelerating to over 21%.

“The complete capitulation in Turkish equities today may represent a turning point in local sentiment,” Nick Stadtmiller, director for emerging markets at Medley Advisors, said by email. “Turkish stocks have surged despite a worsening macro backdrop. But now, Turks pulling their money from the stock market may represent an acceleration in the trend of local capital outflows from the country.” 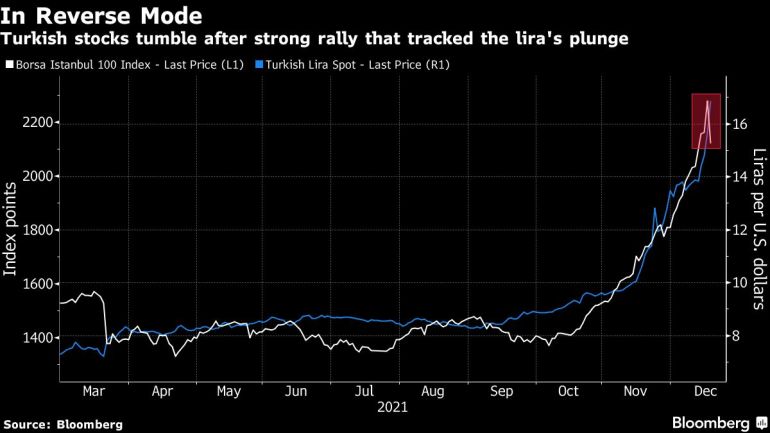 The dramatic moves come as Turks re-evaluate their hedges against rampant inflation and grapple with a currency that has lost almost 40% of its value against the greenback over the past month. Even though the main Borsa Istanbul index of stocks has rallied in local terms, exceeding 2,400 points for the first time on record this week, in U.S. dollar terms it’s down 37% so far this year, making it the worst-performing equity market in the world.

The central bank’s easing cycle since September saw the key rate fall by 5 percentage points, prompting a rush to buy dollars among corporates and retail investors.

President Recep Tayyip Erdogan has advocated for cuts in borrowing costs, arguing that lower rates will eventually free Turkey’s economy from a reliance on short-term foreign inflows. The policy pivot and the ensuing market turmoil prompted complaints from industrialists, who say the current volatility is hurting companies.

“The typical reaction to depreciation in emerging-market stock markets is a rally as investors use equities as a hedge and the leading shares often have a lot of hard currency revenues,” Richard Segal, a research analyst at London-based Ambrosia Capital, said. “However, today is different due to the volatility of the exchange rate, and the lira is approaching rates, which suggest bank capital ratios are running low. In addition, some business groups have begun to speak out more publicly.”