As if working parents didn’t have it hard enough during the pandemic, now a shortage of vaccinated nannies, babysitters and day-care workers is making the seemingly impossible quest to find child care even harder.

Almost every parent who comes to Tiny Treasures Nanny Agency, which makes nationwide placements, are seeking vaccinated providers. Yet, just 60% of the nannies looking to get work through the company have gotten the shots, according to founder Ruka Curate. The mismatch is creating a feeding frenzy for fully vaccinated, qualified nannies, driving hourly rates to eye-poppingly high levels. Six-figure jobs that two years ago would have been filled in a day are now met with resistance from inoculated child-care workers who realize they can ask for more money, Curate said.

The pandemic has taken the U.S. child-care crisis to another level. Parents, especially moms, who rely on help to free them up to do their jobs, have fewer affordable options than ever. Many centers have closed; those that remain open are struggling to hire workers. Throw in fears about unvaccinated workers and sky-rocketing costs, and many women have no choice but to stay home. More than 1 million women aged 25 to 54 that left the labor force during the onset of the Covid recession still haven’t returned, in part, because of the lack of affordable care.

The crunch is only getting worse as more workers head back to offices and more employers require those working at home to have full-time care.

And while mandates have made their way to other industries, many child-care workers remain exempt. Head Start, the federal early-childhood education program, is requiring workers to be vaccinated by the end of January, and a few states have implemented rules that require workers at licensed day-care centers to either get the shots or be tested weekly. But those regulations aren’t universal, nor do they typically cover informal arrangements like at-home centers, or babysitters and nannies hired to come to a person’s home. 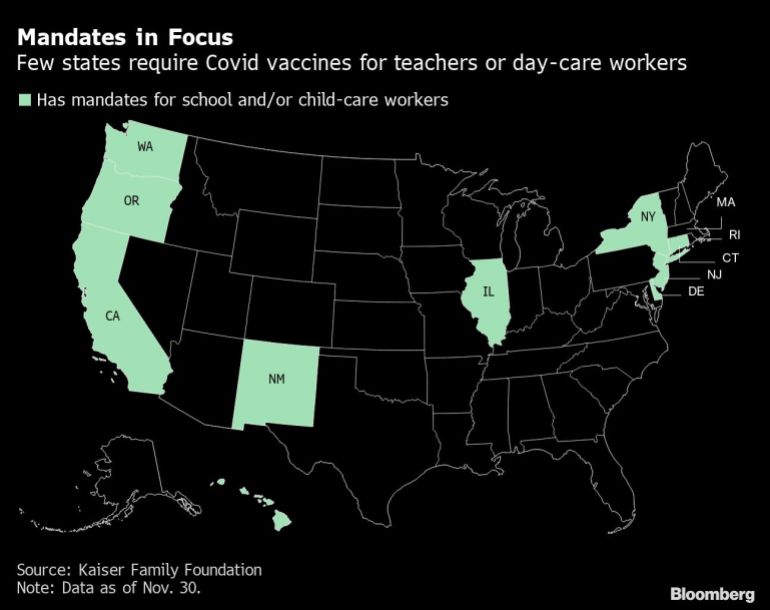 Vaccination rates for child-care providers are hard to pin down thanks to the country’s patchwork system of commercial facilities, home-based providers and nannies, and there’s no national record keeping. In one Yale University survey of 20,000 child-care workers in May and June, 78% reported being fully vaccinated. The figure, though higher than the national rate, lags behind school teachers, who are around 90% vaccinated in some places, according to Kavin Patel, a clinical fellow at the Yale School of Medicine, which oversaw the study.

In a Bloomberg News survey of 20 private day-care centers across the country, only four had fully vaccinated workforces.

At one of those, the South-East Asia Center in Chicago, the center’s vaccine mandate is holding back a much-needed expansion to add a toddler classroom.

“We’ve had to turn down applicants that are unvaccinated,” said co-founder Peter Porr. “But I believe, and the rest of the administration believes, that we have the lives of our staff and our kids in our hands. If we allow them to mingle with people who are unvaccinated, it is like letting them walk across the street we’re on without supervision.”

At Tiny Treasures, Curate only has a few vaccinated providers to send to the many parents asking for them. And as for nannies who come to her looking for work but won’t get the shots?

“We tell them it’s going to be an uphill battle,” she said. “We’ll provide your profile to the client, but at the end of the day, I’m telling you now that the client is not going to hire you because you’re unvaccinated.”

That means vaccinated workers can charge a premium. UrbanSitter, a platform for parents to find babysitters and nannies, reports that, on average, inoculated caregivers are making about $2 more per hour than their unvaccinated counterparts. Rates for child care overall are up almost 11% from last year, Chief Executive Officer Lynn Perkins said, a dramatic jump from a 3.9% increase in 2020.

In the Yale study, vaccine hesitancy, as opposed to structural barriers like not being able to get time off work, was the biggest deterrent to getting the shots.

One unvaccinated babysitter cited concerns about her own fertility — a rumored side effect of Covid vaccines that has been debunked. A YouTube video led her to that theory, she said, asking not to be named for fear of it hurting future job prospects. The owner of a Nevada day-care center said she didn’t trust government agencies to tell the public the truth about potential vaccine side effects. She isn’t mandating shots or regular testing for her staff, she said, asking not to be named because she said she didn’t want to subject herself to public blowback.

“It just has this deteriorating effect on your mental health”

Some parents are all but begging their babysitters and nannies to get vaccinated.

On Father’s Day this year, Marshall Maher’s wife hired a sitter through Care.com for their one-and-a-half year old and four-year old to give the couple a break. But when the sitter arrived, Maher realized she was unvaccinated. After conferring with his wife, who is immunocompromised, Maher asked the sitter to leave, but not before offering to drive her to the pharmacy to get vaccinated that day. She refused.

“On a day that a care option falls through, or our village cannot come together, then our day is completely derailed,” said Maher, who works in marketing at ServiceUp, a car-repair service.

“And it’s not just one day. Then you’re spending your entire weekend catching up. It just has this deteriorating effect on your mental health, even the ability to show up for your kids, taking care of them and knowing your work is piling up,” he said.

Platforms such as Care.com, Sittercity and UrbanSitter don’t mandate vaccines for caregivers. Care.com, however, will require vaccines for new hires working for its corporate backup care program. Bright Horizons, one of the biggest child care providers in the U.S., in August said it would require those in its care centers to be vaccinated or get tested weekly.

Research shows that reliable child care makes it easier for parents, especially women, to work — and earn more, too. Upping access to affordable, high-quality child care would increase the number of women with young children working full time by about 17% and lifetime earnings for moms by about $94,000, according to an April report from the National Women’s Law Center.

“Childcare providers are certainly the workforce that makes all other workforces possible,” said Patel, the Yale doctor.

The logistical drain of finding a vaccinated caregiver almost made Amanda McCracken, a journalist who lives in Boulder, Colorado, stop working altogether. She estimates that 90% of the people who replied to a Care.com ad she put up seeking help last summer were unvaccinated.

“There is a part of me that thought, ‘I guess I have a good reason to stay home now,’” she said.

In the end, after months of searching, she was able to secure two regular caregivers. But the process took a toll on her health, and relationships suffered in the time she had to multitask her freelance work while caring for her 16-month-old daughter. She took a financial hit, too, having to turn down work because she couldn’t keep up.

“I finally feel like I have more consistent, uninterrupted time to work, and I finally have the capacity to do things like run or catch up with friends now that I don’t have five different balls swirling around in my head constantly,” she said.