The chief executive of drugmaker Moderna set off fresh alarm bells in financial markets on Tuesday with a warning that existing COVID-19 vaccines would be less effective against the Omicron variant than they have been against the Delta variant.

“There is no world, I think, where [the effectiveness] is the same level … we had with Delta,” Bancel told the Financial Times.

“I think it’s going to be a material drop. I just don’t know how much because we need to wait for the data. But all the scientists I’ve talked to … are like ‘this is not going to be good’,” Bancel said.

Moderna did not reply to a request for comment from Reuters news agency, or say when it expects to have data on the effectiveness of its vaccine on Omicron, which the World Health Organization (WHO) says carries a very high risk of infection surges.

Vaccine for the new variant

Bancel had earlier told broadcaster CNBC that it could take months to begin shipping a vaccine designed for the new variant.

The WHO and scientists have also said it could take weeks to understand whether Omicron is likely to cause severe illness or escape protection against immunity induced by vaccines.

Cooke said lab tests for “cross neutralisation” would take about two weeks. If there were a need to change COVID-19 vaccines, new ones could be approved within three or four months, she added.

“Vaccination will likely still keep you out of the hospital,” said John Wherry, director of the Penn Institute for Immunology in Philadelphia.

Moderna and fellow drugmakers BioNTech and Johnson & Johnson are working on vaccines that specifically target Omicron in case existing shots are not effective against it. Moderna has also been testing a higher dose of its existing booster.

Uncertainty about the new variant has triggered global alarm, with border closures casting a shadow over a nascent economic recovery from the two-year-old pandemic.

News of its emergence wiped roughly $2 trillion off global stocks on Friday, but some calm had returned on Monday. 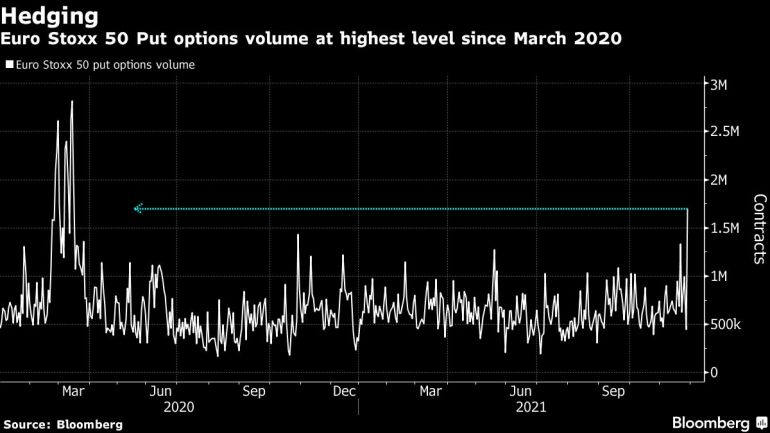 “Information on the omicron variant is sketchy, how drastic its symptoms will be and how easily it can spread is also unknown, as is the effectiveness of current vaccines,” said Kelvin Wong, an analyst at CMC Markets (Singapore) Pte. “I expect more downside risk for the next couple of weeks unless there’s more clarity on the omicron strain.”

The vaccine doubts overshadowed positive data from China, which showed factory sentiment improved in November as the impact of a power crunch subsided and inflation pressures eased. Hang Seng’s China stock gauge closed at the lowest level since May 2016.

First detected in Southern Africa a week ago, Omicron is known to have spread to more than a dozen countries, leading many to tighten border controls in an attempt to prevent a recurrence of last year’s strict lockdowns and steep economic downturns.

The global curbs on travellers from Southern Africa, where the virus was first identified, have highlighted the inequality of vaccine distribution, which may have given the virus more opportunities to mutate.

“The people of Africa cannot be blamed for the immorally low level of vaccinations available in Africa – and they should not be penalised for identifying and sharing crucial science and health information with the world,” UN Secretary-General Antonio Guterres said.

The passenger liner Europa was docking in Cape Town on Tuesday in what was meant to be the official start of the first cruise ship season in South Africa’s top tourist hub since the pandemic.

After Omicron was discovered while they were at sea, many passengers were expected to fly straight home.

India, home to the world’s largest vaccine maker, has approved supplies of COVID-19 vaccines to many African countries and said it stands ready to “expeditiously” send more. China too has pledged one billion doses to the continent.