Turkey’s interest rates will continue to fall, President Recep Tayyip Erdogan said, making a case for an economy freed from dependence on short-term foreign cash and transformed into one that thrives on local production and exports.

Cheaper money will boost manufacturing, create jobs and slow consumer inflation currently running at four times the official target of 5%, and the currency will eventually strengthen, Erdogan said in an interview with state broadcaster TRT on Tuesday. 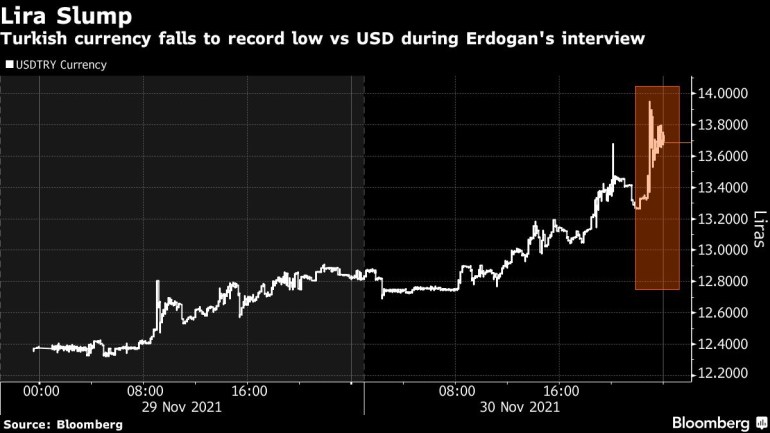 Turkey won’t try to attract capital flows that leaves its economy at the mercy of “hot money,” or investments that can be quickly withdrawn, Erdogan said. His pledges put the Turkish central bank in an awkward position after monetary policy makers said they would assess ending interest rate cuts as early as December. Even so, the Turkish lira lost almost 28% of its value since the bank started its current easing cycle in September and lowered the benchmark rate down by 4 percentage points to 15%.

“Our country has now come to the point of breaking this vicious cycle, and there is no turning back from here,” Erdogan said.

Erdogan unveiled his most recent policy stance a little over a week ago, pushing for lower interest rates to turbo-boost growth and revive his flagging popularity ahead of the 2023 vote.

Pushing for lower borrowing costs is hardly new for the Turkish president, whose proposition that cheaper money slows inflation defies mainstream economics. Driving credit-fueled growth before elections has worked for him in the past.

The accumulating impact of that policy, rising income inequalities and the damage wrought by Covid means the potential social costs are much bigger this time. Price shocks resulting from the lira’s freefall are making life more expensive in the nation of 84 million.

Continuing old policies based on “false” premises would only exacerbate those problems, Erdogan said.

“The high interest rate policy imposed on us is not a new phenomenon,” he said. “It is a model that destroys domestic production and makes structural inflation permanent by increasing production costs. We are ending this spiral.”

The government is working on two support programs aimed at creating 50,000 new jobs to mitigate the short-term volatilities, the Turkish leader said.

Private companies will get 50 billion liras ($3.7 billion) in new loans under one of the programs supported by the Credit Guarantee fund. Interest rates on the loans will be as much as 7 percentage points lower than the market levels, contributing to an estimated growth of 10% in Turkey’s gross-domestic product this year, Erdogan said.