Turkey’s central bank governor said he discussed recent interest rate cuts with bankers at a meeting on Thursday after a slide in the lira to record lows, and he also said that the banking sector was able to overcome market volatility.

Turkey’s lira was flat on Thursday after a historic slide to all-time lows this week, triggered by President Tayyip Erdogan’s defence of interest rate cuts, despite widespread criticism of his policy direction.

Governor Sahap Kavcioglu said after the meeting with top bankers and the country’s BDDK banking watchdog that they made general evaluations on economic developments, and he said that the banking sector was very strong.

“We informed them about everything, whether it be interest rate cuts and other issues,” Kavcioglu told reporters after the meeting. “The sector, central bank and BDDK are very much in harmony and in strong communication.”

The lira was unchanged after the meeting, trading 0.5 percent firmer at 12.025 to the dollar. Before a rebound in the last two days, it hit a record low of 13.45 on Tuesday, down 45 percent this year, touching record lows in 11 consecutive sessions.

Global and domestic developments, the markets and banking sector developments were discussed at Thursday’s meeting, the Association of Turkish Banks said in a statement, describing the meeting as very beneficial.

One market participant said the BDDK told the meeting that it would consider measures such as the country’s capital adequacy ratio.

Separately, officials told Reuters Erdogan had ignored appeals, even from within his government, to reverse the policy.

The central bank said earlier on Thursday inflation would follow a volatile course in the short term.

It made the comments in the minutes of last week’s monetary policy committee meeting, where it cut its policy rate by 100 basis points to 15 percent. It has lowered the rate by a total 400 points since September.

“The central bank can hasten the end of this overshoot by signalling an end to rate cuts and a willingness to use hikes to defend the lira,” a note from the Institute of International Finance said.

“This would help re-anchor inflation expectations, which are rising due to FX pass-through from devaluation, raising the risk of accelerated dollarization. We maintain our fair value at $/TRY 9.50.”

Many Turks, already grappling with inflation of about 20 percent, fear price rises will accelerate. Opposition politicians have accused Erdogan of dragging the country towards disaster.

Erdogan has defended central bank policy and pledged to win his “economic war of independence”, having pressured the central bank to move to an aggressive easing cycle with the goal of boosting exports, investment and jobs.

But many economists have described the rate cuts as reckless and opposition politicians called for immediate elections, Turks told Reuters news.

The deals highlight the pivot towards economic partnership after a decade-long battle for regional influence. 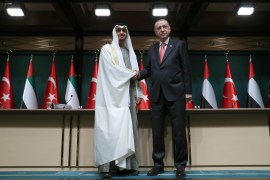 Overall, the lira has lost nearly 40 per cent of its value against the dollar since the start of the year. 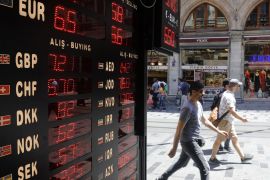 In call with Herzog, Turkish leader says ‘differences of opinion can be minimised if acted with mutual understanding’. 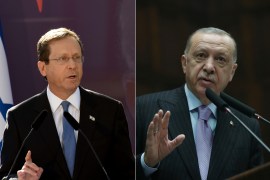 Brutal killing of Basak Cengiz renews demands for Ankara to rejoin the Istanbul Convention on violence against women. 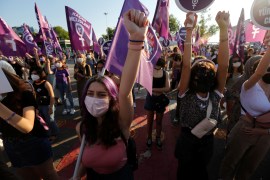