Georgetown, Guyana – The capital of Guyana has yet to reflect its burgeoning fortunes. Deep puddles of water pool on pot-marked roads. Key heritage buildings are in sore need of fresh paint, and minimum wage workers toil for just over $1 an hour.

But South America’s only English-speaking country is in the midst of an oil boom.

Home to fewer than 800,000 people, Guyana saw some of the planet’s fastest economic growth last year: more than 43 percent, according to the World Bank, as new offshore fields started production.

United States oil giant ExxonMobil estimates Guyana holds at least 10 billion barrels of crude, potentially making the country one of the richest on a per capita basis in the western hemisphere over the next two decades.

But Guyana’s drive to develop its oil wealth is colliding with the threat climate change is posing to its future.

Earlier this year, devastating floods wrecked crops and destroyed thousands of homes. Rising sea levels mean Georgetown is one of nine major world cities forecast to be underwater by 2030 if greenhouse gas emissions continue at their current rate, according to the research group Climate Central.

As world leaders wrap up United Nations climate negotiations in Glasgow, Scotland this week, Guyana is attempting to strike a delicate balance between extracting energy to lift people out of poverty and combatting the climate crisis.

“We are a poor country; we’re developing. We have a resource; we have to capitalise on it,” said Kemraj Parsram, executive director of the Environmental Protection Agency, the government body responsible for safeguarding ecosystems.

“At the same time, we can maintain and achieve international [climate] obligations and maintain net-zero [carbon emissions],” he told Al Jazeera during an interview at his office in the capital.

Investing for the future

With more than 40 percent of its population living on less than $5.50 per day, according to the World Bank, Guyana has played a minimal role in causing climate change.

Officials say Guyana can extract billions of barrels of oil while maintaining net-zero carbon emissions due to its vast rainforests, which suck carbon dioxide from the atmosphere.

Whether that accounting proves to be accurate, environmentalists worry that Guyana is joining the black gold business in the waning days of the petroleum era, with dangerous consequences for its climate and long-term economic prospects.

Forecasts for peak oil demand have been inching forward during the coronavirus pandemic. British energy producer BP said oil demand may have already reached its apex in 2019, while consultancy Bernstein Energy among others sees demand for crude plateauing between 2025 and 2030. The Organization of the Petroleum Exporting Countries has one of the longest time horizons, calling for peak oil by 2040.

“It’s like going into the telegraph business now when we are talking about 5G cellular,” Martin Dietrich Brauch, a senior economics researcher with Columbia University’s Center on Sustainable Investment, told Al Jazeera of Guyana’s move into offshore oil drilling.

“It’s a technology we know will need to be phased out. This is the key issue for Guyana: is it worth entering this now with huge investments that will be impossible to maintain after 2050?”

Under current emissions reduction pledges from countries at the Glasgow summit, the planet is expected to warm by 2.4 degrees Celsius by 2100, the Climate Action Tracker research group reported this week.

That’s far above the 1.5-degree limit scientists say the world must meet to avert the most devastating impacts of climate change.

Tapping vast new oil deposits simply isn’t viable, according to the scientific consensus, if the world is to avoid climate catastrophe.

Guyana has every right to develop its economy and infrastructure, Brauch said, but even putting the climate crisis aside, going hard on renewable energy now makes more long-term economic sense than pouring billions of dollars into oil infrastructure.

ExxonMobil, the biggest player in Guyana’s new offshore fields, started production in December 2019. The company declined to make a local representative available for an interview but responded to Al Jazeera’s questions by email.

“The production of resources will continue to generate billions of dollars of revenue, significant economic development and job creation for Guyana,” an ExxonMobil spokeswoman told Al Jazeera.

The company expects to reduce absolute greenhouse gas emissions from its production business by 30 percent by 2025, she added.

On the frontline of global warming

On the streets of Georgetown, some residents are keenly aware of the impacts of climate change. And many say the benefits of oil money have yet to arrive in their pockets.

“With the oil, the cost of living is way up,” Rawle White, the owner of a vegetable stall at a local market, told Al Jazeera. He spent 20 years working as a farmer but gave up due to frustration over environmental shifts.

“Because of climate change, you can’t do much farming now,” White said. “The tractor [often] can’t go onto the land with all the sinking because of rainfall.”

Businesspeople at the Georgetown Chamber of Commerce and Industry say it will take some time and planning for oil wealth to improve life for the average Guyanese, and growth is compatible with sustainable development.

Local companies are already seeing increased demand in catering, accommodation, transport, logistics and other industries due to the oil boom, said Richard Rambarran, the chamber’s executive director, and more can be done to share the wealth.

“Local content legislation is what’s going to bring everyone into this … and make sure every Guyanese is benefitting from their resources, not just the oil companies sucking it out,” he told Al Jazeera. He hopes that legislation will be finalised and passed by the end of this year.

Guyana could become a high-income country in the next three decades, Rambarran said, and a “leader of the global south for sustainable development” if the industry is managed properly.

On the docks of Georgetown’s main fish market, many workers don’t see it that way.

Catches have dropped by about half in the past two years, said Melvin Hussein, as he removed scales from a fish with a sharp silver knife. “The fishing economy is getting low and we can’t do a damn thing about it … so far it [the oil] ain’t doing no good for us.”

“The fishermen are going to be the biggest losers at the end of this oil industry,” Singh, who has worked these waters for 40 years, told Al Jazeera.

“What will we do when Exxon leaves?” 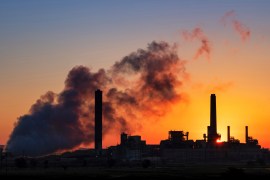 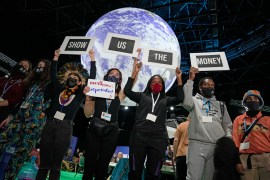 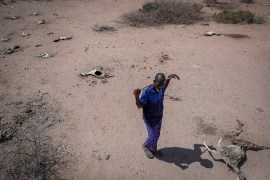 Those on the front line of extreme weather say words from world leaders are no longer enough.