Mexico’s central bank raised interest rates by a quarter point for its fourth consecutive meeting, sticking to a steady adjustment pace even as inflation accelerated faster than expected.

Policy makers, led by central bank Governor Alejandro Diaz de Leon, cast a split 4-1 vote to raise the key rate to 5% on Thursday, as forecast by 18 of 26 economists surveyed by Bloomberg. Eight analysts had expected that the five-person board would go for a bigger half-point increase. 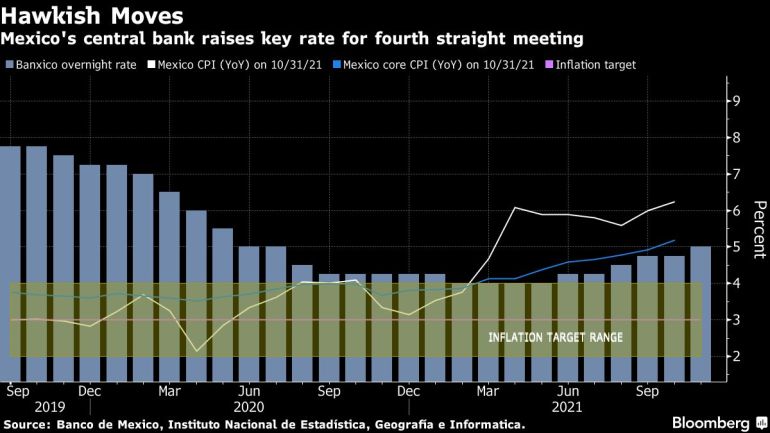 “The balance of risks for the trajectory of inflation within the forecast horizon deteriorated and remains biased to the upside,” board members wrote in a statement accompanying the decision, adding that headline and core inflation forecasts were revised upwards.

Diaz de Leon, together with board members Galia Borja, Irene Espinosa and Jonathan Heath, voted in favor of the rate hike, while Gerardo Esquivel was the dissenting voice in favor of leaving the rate unchanged as in the last three decisions.

Banco de Mexico, known as Banxico, has been steadily increasing borrowing costs since June, the first tightening cycle since late 2015 to 2018, in an effort to slow inflation that’s remained around 6% since April, surprising policy makers. Central banks in Brazil, Chile, Peru and Colombia, by contrast, in the last weeks have accelerated the pace of tightening in response to surging consumer prices.

Latin America’s second-largest economy contracted during the third-quarter, helping dissuade Banxico from a more aggressive rate move. Incremental rate hikes have continued, despite annual price gains surpassing 6.2% in October and staying way above the bank’s goal, which targets inflation at 3%, plus or minus one percentage point. 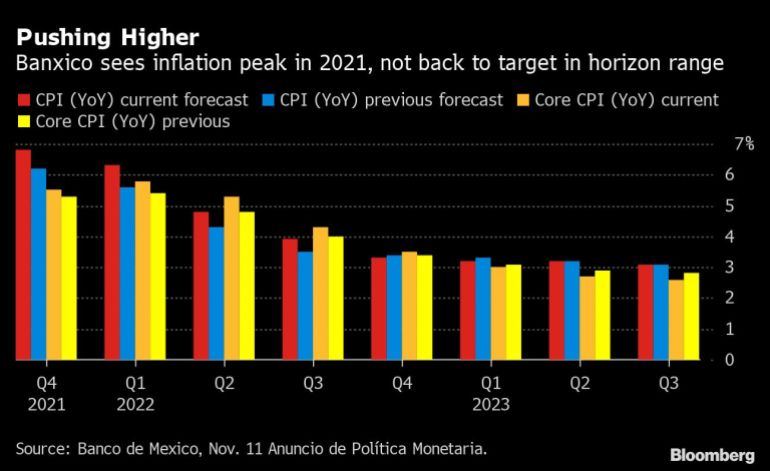 “The bank has continued to bet on a cautious increase of the key rate, based on the weakness of the economy,” said Andres Abadia, chief Latin America economist at Pantheon Macroeconomics. “Clearly the inflation pressures are to the upside, and they can damage expectations and the economic recovery a great deal.”

Unlike the Federal Reserve and the Bank of England, emerging markets have been aggressively boosting borrowing costs this year as a way of taming worsening inflation expectations. In Latin America, central banks have reacted as consumer prices are being pressured by global supply-chain disruptions and costlier energy and food supplies.

“The shocks that have increased inflation are largely considered to be transitory,” Banxico said in its statement. “Nevertheless, the horizon in which they could affect it is unknown, and they have involved a wide range of products, while being of considerable magnitude. This poses greater risks to the price formation process and to inflation expectations.”

Energy prices were listed among the upside risks, since global prices have spiked.

Mexico’s central bank has one more meeting, in December, before Diaz de Leon leaves his post to be replaced by former Finance Minister Arturo Herrera. Economists in a recent Citigroup Inc. survey indicated the year-end level for the key rate would reach 5.25%, as inflation continues its upward trajectory.

Gabriela Siller, director of economic analysis at Grupo Financiero BASE, echoed the prediction of another quarter-point increase this year because “there are still important inflationary pressures and above all because expectations continue to go up.”

Banxico also said in its statement that it expected inflation to reach 6.8% by the end of this year and 3.3% at the end of 2022, nearing the inflation target by reaching 3.1% only in the third quarter of 2023.