How much higher will prices climb?

For months now, blistering inflation has been a hallmark of this year’s global economic rebound from last year’s COVID-19 blow. And in the United States – the world’s largest economy – price pressures continue to accelerate at a pace not seen for three decades.

US consumer prices jumped a blistering 6.2 percent in October from the same period a year ago, the US Department of Labor said on Wednesday. That is the fastest pace since 1990 and blew past many analysts’ already dour inflation estimates.

On a monthly basis, the Consumer Price Index (CPI) increased 0.9 percent in October, after rising 0.4 percent in September.

Supply chain bottlenecks and shortages of raw materials and workers are driving prices ever higher for US businesses, which in turn are increasingly passing those increased input costs onto American consumers.

That matters deeply to the health of the US economy given two-thirds of its growth is driven by consumer spending.

So far, the steward of the US economy, the Federal Reserve, has been unconcerned about this year’s rise in inflation, insisting that price pressures will prove temporary and eventually ease down.

The Fed has decided to start dialling back bond purchases which have helped buoy the economy during the pandemic. But it said that should not be taken as a signal that it is ready to raise interest rates  – the sharpest tool at its disposal for reining in inflation – any time soon.

US consumers meanwhile are bracing for more pain in their wallets, with the most recent monthly survey of consumer expectations by the New York Fed showing median inflation expectations for the coming year have hit an all-time high.

Consumers often react to rising prices by swapping out more expensive brands for less pricey ones or simply going without goods and services they can put off buying until a later date, when sticker shock may have eased.

Some purchases, though, cannot be delayed – like food, fuel, and shelter. This is why inflation hits low-income households especially hard because they shell out a larger share of their modest incomes to cover the necessities. 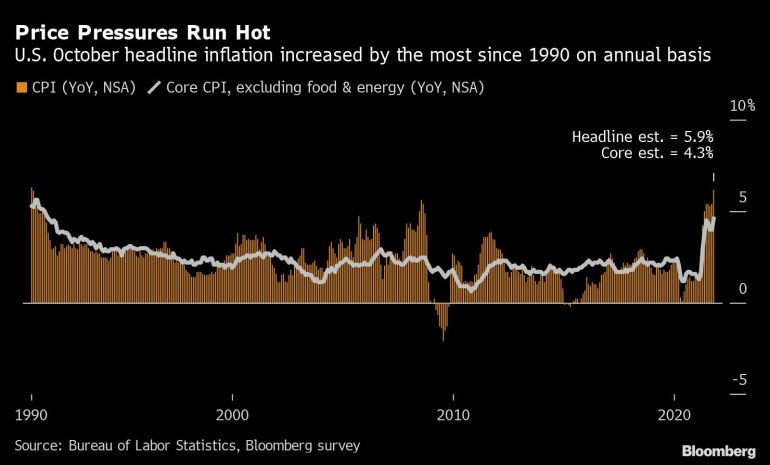 October’s consumer inflation surge was led by energy, with prices jumping 4.8 percent from the month before and 30 percent over the past twelve months.

Within the energy category, gasoline prices vaulted 6.1 percent in October on a monthly basis and nearly 50 percent from the same period a year ago.

The so-called core CPI, which strips out food and energy, rose 0.6 percent in October from the month before, driven in large part by higher vehicle costs thanks to a shortage of semiconductors that have weighed on car and truck production and made used cars a whole lot more expensive.

“The biggest concern for the Fed should be signs that longer-lasting cyclical inflation pressures are continuing to build rapidly, with CPI rent of primary residence and owners’ equivalent rent both posting strong gains of 0.4% m/m,” said Andrew Hunter, senior US economist at Capital Economics in a note to clients. “As the improving labour market and prior gains in house prices continue to feed through, a further acceleration in shelter inflation looks nailed on.”

The effect of workers’ shortages on consumer prices was evident in the “food away from home” category of CPI. That rose 0.8 percent in October, reflecting this year’s sharp rise in wages for workers in customer-facing leisure and hospitality jobs.

But this year’s pay bumps are not keeping up with inflation, leaving many households on the back foot where rising prices are concerned.

Last month, average hourly wages were 4.9 percent higher than the same period a year ago.