Bitcoin hit another record high and is flirting with $69,000 for the first time after inflation data bolstered the argument that the cryptocurrency is a hedge against rising cost pressures.

The largest digital asset by market value rose as much as 1.9% to $68,991 on Wednesday, topping the previous high set late Monday in New York trading. Other coins also rose, with the Bloomberg Galaxy Crypto Index – which tracks major cryptos – gaining as much as 2.4% to its highest level since May.

The rise in the token can, at least partly, be explained through the fundamental argument – which has gained traction in recent months – that Bitcoin can act as an inflation hedge. Crypto backers argue that, unlike dollars or any other traditional currency, the digital coin is designed to have a limited supply, so it can’t be devalued by a government or a central bank distributing too much of it.

“Bitcoin continues to enjoy the rally that began in August and accelerated through September and October,” said Sui Chung, chief executive of CF Benchmarks, a cryptocurrency benchmarks administrator. The latest leg of its rally began in anticipation of the October launch of a Bitcoin-futures ETF, but “seems to now be fueled by the sustained inflation that we are witnessing across all the worlds major economies.” 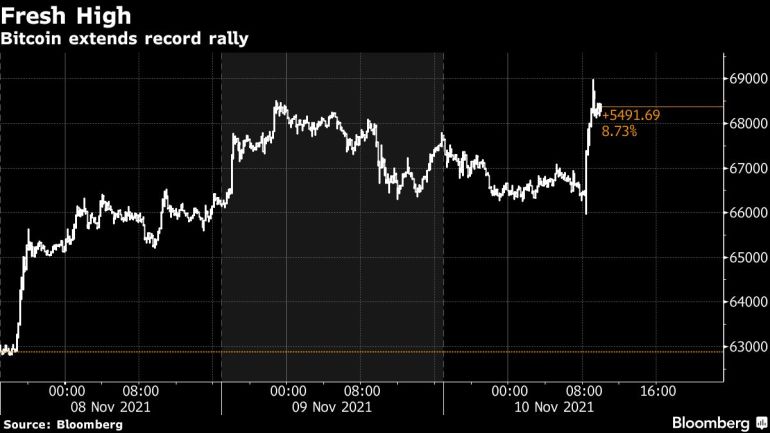 Prices on everything from food to gas to housing have advanced faster and been stickier over the past few months than many economists had anticipated. U.S. consumer prices rose last month at the fastest annual pace since 1990, cementing high inflation as a hallmark of the pandemic recovery and eroding spending power even as wages surge.

Major Wall Street players have said they’ve bought the coin – or become interested in it – thanks to the inflationary-hedge thesis. Their case has been bolstered by the fact that gold, typically thought of as an inflation hedge, has underperformed in recent months while Bitcoin has advanced.

Still, others argue that it doesn’t have a long enough history to establish it can in fact act as an inflation hedge. Cam Harvey at Duke University has made that argument in the past, saying that theoretically, if investors come to regard it as similar to gold, Bitcoin might hold its value over a very long term — as in a century or more. In his research on gold, he found that it has held its value well for millenniums. But he also found that it’s prone to manias and crashes over shorter periods.

Matt Maley, chief market strategist for Miller Tabak + Co., says that a lot of investors are looking at it as an inflation hedge, but he’s not convinced that it will work out well.

“I’m not saying it won’t — I just think gold has worked as an inflation hedge for centuries, so people should use gold in combination with Bitcoin as a hedge,” he said.

The spot price of gold has dropped 1.8% this year, while Bitcoin has gained more than 130% in that span, according to data compiled by Bloomberg.

“People are looking for places to put their money,” JJ Kinahan, chief market strategist at TD Ameritrade, said by phone. But, he added, “it’s hard to say if it’s an inflation hedge or not because we haven’t lived through inflation with cryptocurrencies. It’s one of those things where everyone thinks it will be, but time will tell.”