By Filipe Pacheco and Yueqi Yang and Layan OdehBloomberg

It was hailed as the first tech unicorn from the United Arab Emirates in its debut on the New York Stock Exchange and touted as the “Clubhouse of the Middle East.”

But these days, Yalla Group Ltd., a voice-chat startup based out of Dubai, might be earning a less flattering label: stock-market bust.

After a fivefold surge in the months following its initial public offering last year, Yalla — a Chinese-backed social network based in the United Arab Emirates that means “Let’s Go” in Arabic — has given up all its gains and then some. Since peaking at over $40 in February, Yalla has lost more than 80% of its market value. Its American depositary receipts, which debuted at $7.50, are now consistently below $7 and hit an all-time low of $6.26 this past week.

This is quite a comedown for a company once feted by Dubai’s ruler Sheikh Mohammed bin Rashid Al Maktoum, drew comparisons to the buzzy Silicon Valley startup Clubhouse and even garnered a small stake from billionaire Steve Cohen’s hedge fund. But as the once red-hot, live-audio chatroom space cools, the company’s spectacular growth has come under scrutiny.

“We caution that investors should be wary of Yalla’s risks,” said Nirgunan Tiruchelvam, the Singapore-based head of consumer sector equity research at Tellimer. While Tiruchelvam doesn’t have a formal recommendation on the stock, he wrote in a Sept. 16 note that the allegations show “the risk of trusting non-financial metrics.”

“It doesn’t mean that all the allegations from the short sellers are correct,” he said in an email to Bloomberg News. “But it means there are a lot of uncertainties.”

“We believe the complaint is unfounded and without merit,” Gao said.

When Yalla debuted on the Big Board in September 2020, things could hardly have been more different. The company’s main shareholders are Chinese, including directors and executive officers, with a complex ownership structure using several offshore entities, but the operations are in the UAE.

Buoyed by a $1 billion valuation and the enthusiasm for voice chat, which before long would be embodied by the Clubhouse frenzy, Yalla’s ADRs more than doubled by December. Two months later they doubled again, lifting them to a high of $41.35 on Feb. 11 and pushing Yalla’s market value close to $6 billion.

Then, Yalla’s stock-market fortunes began to turn. The initial buzz wore off and competition in audio chats began to heat up as companies like Twitter entered the arena. China’s crackdown on its U.S.-listed companies didn’t help either. By May, Yalla was already down roughly 50% from its peak when Swan Street and Gotham City disclosed that they were shorting Yalla.

Swan Street, founded this year by an anonymous former Wall Street analyst, according to its website, said in its 31-page report that Yalla’s numbers didn’t square with its own “channel checks” and that usage metrics such as its number of monthly average users were inflated by bots. On its Twitter feed, Gotham City compared Yalla to Luckin Coffee Inc., the Chinese company that went public to much fanfare, but filed for bankruptcy in the U.S. after saying more than a quarter’s worth of business may have been faked. Gotham City is still short Yalla, founder Daniel Yu wrote in an email.

(Swan Street declined multiple requests to comment on the record.)

Yalla responded by saying it “has not placed any robots into any of its chatrooms or otherwise manipulated its MAU or other operating or financial data” and announced a $150 million share buyback — just over the amount it raised in its IPO.

In its earnings release in August, Yalla said its monthly average users (MAUs) reached a record 22.1 million at the end of the second quarter. While revenue more than doubled to $66.6 million from a year ago, the figure was at the low end of Yalla’s own guidance, deepening its ADR selloff.

An analysis for Bloomberg by the mobile app researcher Apptopia showed that all Yalla apps combined had 5.41 million monthly average users at the end of June, about a quarter of the company’s reported figure. Apptopia gathers data to assess the performance of apps and counts Google, Microsoft, Facebook and Andreessen Horowitz among its customers. 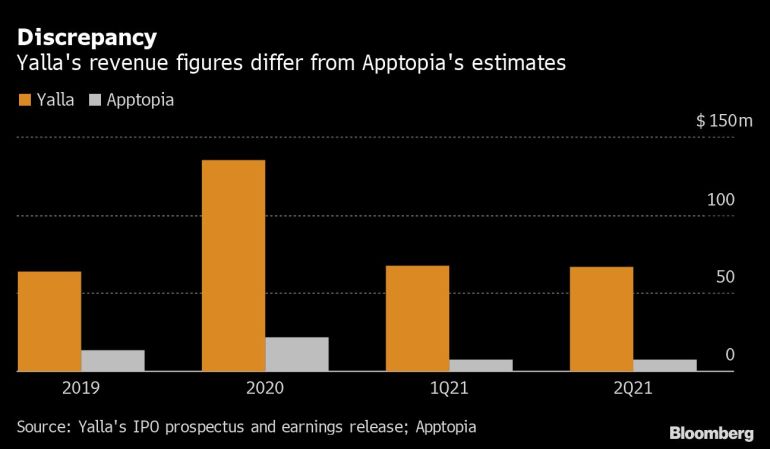 And despite the reported surge in users, there’s been no corresponding increase in internet searches for the terms “Yalla chat” (both in English and Arabic) and “Yalla app,” based on Google Trends search metrics.

Yalla’s numbers “reflect something like the phenomenal growth enjoyed by Clubhouse in its first year of beta-test operation,” said David Tuffley, a senior lecturer in applied ethics and cybersecurity at Griffith University in Queensland, Australia. “I’m skeptical.”

Four days after Yalla’s reported second-quarter earnings, Jeffrey Crass, a retail investor represented by Scott + Scott Attorneys at Law, a law firm for shareholder fraud suits, sued Yalla and its CEO, claiming they misled investors about its financial metrics and failed to disclose the company overstated its user metrics and revenue. Seven other investors filed motions to serve as lead plaintiffs of the action and represent a class of similarly situated shareholders who suffered losses from Yalla’s ADRs.

Gao said Apptopia’s estimates are “inconsistent with the financial and operating data we collected from our own business operation and audited by our auditor.” She added that Google search trends don’t accurately reflect the company’s growth and popularity. Yalla’s interactive community culture has created a strong word-of-mouth effect and its growth has benefited from the rise of online social networking during the pandemic, as well as advertising on Facebook, Gao said. She also reiterated that the lawsuit is without merit.

Whatever the case, some investors have already decided to throw in the towel. Cohen’s Point72 Asset Management, a top outside holder early in the year, sold out of its 520,000 ADR position, a regulatory filing as of June 30 showed. The firm declined to comment.

The ADRs have closed below their IPO price for 20 consecutive sessions. Since Yalla’s peak in February, the slump has wiped out around $5 billion of value and pushed its market capitalization below $930 million.

On Oct. 17, Morgan Stanley analysts led by Omar Sheikh cut his price target for the company’s ADRs to $7 from $16. In a research note, he wrote that the Morgan Stanley AlphaWise’s survey of social media users in one of Yalla’s biggest markets, Saudi Arabia, suggests “low awareness and usage of Yalla’s apps, which reduces our confidence in the company’s ability to achieve high levels of penetration long term.”

A recent visit to the app showed users chatting in real-time in various audio rooms, although it’s hard to know who they are or, as short sellers have suggested, if there are real people behind all of those accounts. Bloomberg contacted a number of people on Yalla’s Facebook page for its popular online board game called Ludo, which is similar to Parcheesi, and they said they mainly use Yalla’s app for chatting while playing games like dominoes or Ludo.

Gao said Yalla collaborates with a number of social media influencers to promote its platform, including TV broadcasters Lutfi Al Zoabi and Fadia Al-Taweel. Zoabi said he does a daily sports segment that’s broadcast on Yalla’s platform. His wife, Sally Assad, worked at Yalla but is no longer employed there, according to her LinkedIn profile. Al-Taweel didn’t respond to requests for comment.

However, it hasn’t been easy to independently find prominent people who use Yalla’s services or are aware of them. Bloomberg News spoke to more than 15 UAE tech entrepreneurs, specialists and influencers over the past few months, none of whom use Yalla apps or know anyone who does. Many had never even heard of it.

One of them was Lana Al Beik, a 26-year-old model who’s a popular social-media influencer living in Yalla’s home base of Dubai. She has 56,600 Instagram followers and used the Clubhouse voice-chat app when it first started. While pursuing of a master’s degree in communications, Al Beik said she did a significant amount of research on local startups as part of her studies. Yalla never came up.

“We spoke to people from major players like Google,” she said. “We were talking about such companies all the time. But I never heard of Yalla.”

–With assistance from Jennifer Bissell-Linsk and Lisa Pham.